The young Italian artist Paolo Chiasera is fascinated by historical icons, myths and cultural symbols. He reflects on the various layers of meaning that lie concealed in our contemporary culture. The artist isolates extracts from all these and uses them as pawns in a new narrative that is founded on the 'collective memory', like bricks on the ruins of forgotten thoughts. 'Inside Installations' brings 10 installations from the S.M.A.K.'s collection face to face with one another and with the space in which they are located. The Kunst Nu rooms at the S.M.A.K. presents the South African artist Simon Gush. His solo show '4 for Four' comprises of a video installation in which four videos attempt to examine the complexities of speaking politically or, in other words, speaking for more than oneself. 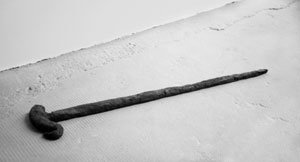 Paolo Chiasera
Ain’t No Grave Gonna Hold My Body Down

The young Italian artist Paolo Chiasera (1978, Bologna, Italy) is fascinated by historical icons, myths and cultural symbols. He reflects on the various layers of meaning that lie concealed in our contemporary culture. From cinema, literature, philosophy and music to art history and politics. The artist isolates extracts from all these and uses them as pawns in a new narrative that is founded on the "collective memory", like bricks on the ruins of forgotten thoughts.
In concrete terms, Paolo Chiasera’s work is not limited to one particular medium. Painting and drawing, videos, installation, sculpture and performance, they are all available for use in a narrative tangle that is presented to the viewer bit by bit as an ongoing process. In the exhibition Ain’t No Grave Gonna Hold My Body Down, the S.M.A.K. is focusing on a number of artistic processes that have developed in Paolo Chiasera’s oeuvre in the last few years.

In The Trilogy (2006-10), Chiasera enters into dialogue with three well-known artists from the Low Countries: Cornelius Escher (1898-1972), Vincent Van Gogh (1853-90) and Peter Brueghel the Elder (1520-69). The Trilogy is a cluster of works – sculptures, videos and gouache drawings – that he has been working on systematically since 2006. In this complex project, Chiasera focuses primarily on a study of himself as an artist. He undermines the myth of the artist as ubiquitous and supreme by using great masters from art history as pawns in a new game. He calls them by their first names and moves them to a contemporary context. Using rubber masks, Chiasera gets under the skin of these three great masters so as to be able to manipulate and reformulate their stories. He creates his own versions of the existing myths centred on Vincent, Peter and Cornelius, concentrating on their artistic “weaknesses”, their “failures” and their “obsessions”.

In another work, Chiasera examines the theories of the German philosopher Martin Heidegger regarding “time” and “being”, and this resulted in, among other things, the video Condensed Heidegger’s Hut (2009). Using wood and cardboard, he reconstructed the hut that provided the peace in which the philosopher could write some of his major works. The video is like a tribute to the great man, until the moment when der Hütte goes up in flames (or so it is suggested) and the ash that remains is used to create a monochrome painting and a walking stick.

The exhibition at the S.M.A.K. is entitled Ain’t No Grave Gonna Hold My Body Down, a line from a gospel song. Chiasera’s intention with this clear reference to Christ’s resurrection is in the first place to underline a number of recurring elements in his oeuvre. Construction and destruction, the importance of the myth, the hero, but above all the creation of physical remains of meanings imagined lost.

S.M.A.K.’s collection contains more than 1800 works and covers a wide range of developments in international art history from 1945 to the present day. "Inside Installations" brings 10 installations from the collection face to face with one another and with the space in which they are located. The exhibition immerses you in the multifaceted world of installation art and at the same time explains the questions and difficulties involved in archiving these sometimes quite complex artworks and making them accessible.

Inside Installations focuses on the ‘invisible processes’ that take place in the museum. How does a museum deal with installations that were designed for a highly specific space? Can one depart from this and display the work elsewhere? How are installations documented? Are plans and photographs sufficient to be able to reconstruct the exact arrangement of an installation at a later date? S.M.A.K. has examined these questions and developed documentation which also includes the spatial perception of an installation. This allows the installation to be rearranged following its dismantling without losing any of its essential elements. For each installation, a dossier is drawn up containing every possible item of information. Ideally, various arrangements are tested and adapted according to the specific space in question. Joëlle Tuerlinckx, for example, designed five different scenarios for displaying Un Ensemble autour de Mur (1999). For PIG (Piece In Ghent) (1994), a complex installation with objects which each refer to elements from The Lamb of God (1432) by the Van Eyck brothers, Jason Rhoades devised a single arrangement which had to be rigidly adhered to. During the course of the exhibition, Honoré d’O will arrange Draaiboek voor de Schatbewaarder (1996) in five different ways. These scenarios will be closely documented, thereby allowing S.M.A.K. to create an optimal scholarly dossier in dialogue with the artist.

Documentation room
The installations included in the exhibition offer a range of information – art-historical, the arrangement and the artist’s specific requirements, the ideal architectural context, various documentation techniques etc. – which mostly remains hidden. Inside Installations is the first ever opportunity to take a look behind the scenes. The documentation room shows the various aspects of conservation and management in a unique way. Those who want to hear from the artists themselves can watch several video accounts and those who want to dig deeper can unashamedly browse through the complex dossiers related to the works of art. And those who just want to head straight for the installations, go right ahead!

Installation art?
What is installation art? How does one conceive of it? Due to the enormous diversity of materials, objects and meanings, it is difficult to give a definitive answer to these questions. Nevertheless, here is an attempt to give a number of ‘possible’ features: an installation is a combination of various objects and media (and sometimes also performances), which enter into dialogue with each other and the architectural space. Sometimes you can even physically enter the artwork. An installation can use the entire space as a supporting and compositional element. It does not need a pedestal or a wall or any breathing space around it. An installation is often described as theatrical and experience-oriented. Some installations stimulate your senses, while others actively involve you in them. Whatever ‘experience’ is generated, the following saying generally applies: ‘you had to see/experience it to know exactly what it meant.’

A European research project
The exhibition is an offshoot of or a reflection on the European-wide research project Inside Installations: Preservation and Presentation of Installation Art, which took place between 2004 and 2007 and met with an international response. S.M.A.K. was involved in the project as one of the active partners and in this exhibition it aims to involve the spectator in the somewhat ‘hidden’ but nevertheless important tasks which a museum has to fulfil, namely conservation and guardianship. Together with Tate Modern in London and Reina Sofia in Madrid, among others, the S.M.A.K. investigated the complexity of installation art and the issues, which arise when an installation is included in a museum collection.

This summer, the Kunst Nu rooms at the S.M.A.K. will be occupied by the South African artist Simon Gush (b. 1981). He works across a number of mediums including video, sculpture and performance.
4 for Four comprises of a video installation in which four videos attempt to examine the complexities of speaking politically or, in other words, speaking for more than oneself. Through his work, Simon Gush attempts to continually rehearse this act of articulation and is convinced that artists should adopt a specific social ‘position’. Gush believes that, very often, the most effective way to communicate is not directly but through allusion and rhetorical devices such as metaphor, metonymy and catachresis. It is the anecdotal and minor ‘details’ that fascinate him most. It is through these elements that he believes one can most effectively enter into wider debates.

4 for Four is inspired by the relationship between the virtuoso Russian violinists David Oistrakh and Sergei Prokofiev (1981-1953), one of the most important Russian composers of the 20th century. It will comprise of a video installation in four sections. In the first video a performance of Prokofiev’s 1st Violin Sonata (1946), the second Gush depicts the sky above the Potemkin Stairs, a reference to Sergei Eisenstein’s, film Battleship Potemkin (1925). The third and fourth screens will show a re-enactment of David Copperfield’s illusion in 1986, where he walked through the Great Wall of China, and an age-old, Norwegian glacial landscape respectively.

What do these different stories tell us? The 4 for Four video installation is presented as a musical, visual and narrative composition comprising of four storylines that are independent and interrelated. Gush provides poetic interpretations of historical references and sets rationality and emotion dialectically opposite each other. Each section represents a detail from the main story and thus does not avoid the whole.

S.M.A.K.
Citadelpark – 9000 Gent
Openinghours
Museum: Closed on Monday
Tuesday through Sunday from 10 am to 6 pm
Entrance fees E 6: individual visitor, E 4: groups from 15 persons, under-25s, over-60s, students
E 1: young people under the age of 26
Free: for children up to and included the age of 18, disabled and persons accompanying groups.
Admission to the museum is free for citizens of the city of Ghent every Sunday morning from 10 am to 1 pm.