Drawings and Installations. A comprehensive showcase of her work and site-specific projects, the exhibition also includes the light and sound installation Im privaten 'Licht der Offentlichkeit'. With approximately 100 red lamps, Waldach has created in the Kunsthalle a unique city portrait, a lightscape that wafts above a whispering sound cloud of private memories and individual thoughts. Contemporary: Masterpieces of the collection, with works from the early 20th Century up to the present, famous groups of artists like Der Blaue Reiter, Die Brucke, and CoBrA. 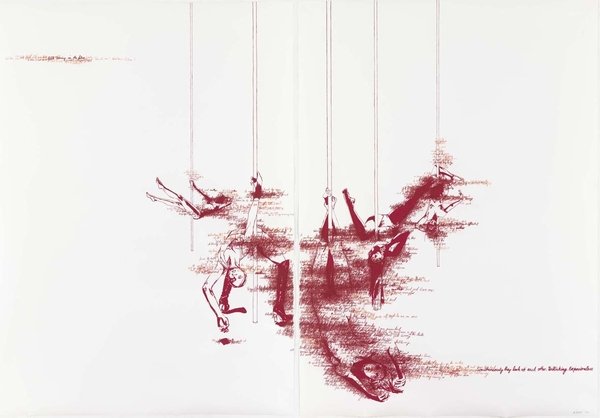 The former Master Scholar of Georg Baselitz has gained international recognition for her works, such as her unique red drawings that stand out both in form and content, and her thematisation of the “German Autumn” and RAF (Red Army Faction). Following numerous exhibitions in New York, Copenhagen, São Paulo, Los Angeles, Barcelona and Berlin, the show at Kunsthalle Emden is Waldach’s largest solo museum exhibition to date and also the launch of a museum tour with two further stations in Sweden and Norway, at Konstmuseum Kalmar and at Rogalandmuseum Stavanger.

In addition to her large-format drawings and site-specific works, the exhibition will also include the light and sound installation Im privaten Licht der Öffentlichkeit [In the Public’s Private Light]. With approximately 100 red lamps that were donated by private citizens of Emden for the duration of the exhibition, Waldach has created in the Kunsthalle a unique city portrait, a red lightscape that wafts above a whispering sound cloud of private memories and individual thoughts.

Brigitte Waldach is a master of orchestration. Her large-format, sometimes multi- part drawings make minimal use of primarily the colour red and but a few visual elements. The two-dimensionality of drawing thus exists alongside three-dimensional installations that interweave various levels of space and reality. Waldach’s spatial drawings feature figures from popular and high culture who are accompanied by quotes from the dramas of Shakespeare and Samuel Beckett, texts by Franz Kafka and Edgar Allan Poe, as well as philosophical-theoretical works such as Ludwig Wittgenstein’s Tractatus Philosophicus Logicus. “Images from the media that are etched in our cultural memory play a major role,” explains Waldach.

Writing is a further central element with which the artist has worked since 2007. These are often texts surrounded by controversial public discourse, such as the exchange of letters between the sisters Gudrun and Christiane Ensslin; or recently, excerpts from Shakespeare’s Hamlet, which drift through the artist’s work in ever new combinations. Waldach’s works reveal cultural contexts that are precisely drawn and complemented by well-known or contextually complex quotes. She creates mesmerizing puzzles that oscillate between our collective cultural memory and individual perception.

On occasion of the exhibition, the catalogue Sturz/Fall has been published in both English and German by Kehrer Verlag, issued by Kunsthalle Emden, with texts by Lena Nievers, Martin Schibli and Dieter Scholz; hardcover; 23.5 x 26 cm, 148 pages, approximately 90 colour reproductions, ISBN 978-3-86828-116-3.

Masterpieces of the collection
The presented spectrum presents works from the early 20th Century up to the present.