(Don't ) Art, Fashion, Music. The DCA galleries will be further transformed into a giant stage and studio set for making music videos, experimenting with no-choreography and ongoing craft projects live, including loom-weaving inspired by Bauhaus design, lectures and workshops, film screenings of their fashion archive and selected video pieces. Chicks on Speed have been working with local and international artists and makers to combine traditional craft with cutting-edge technology. 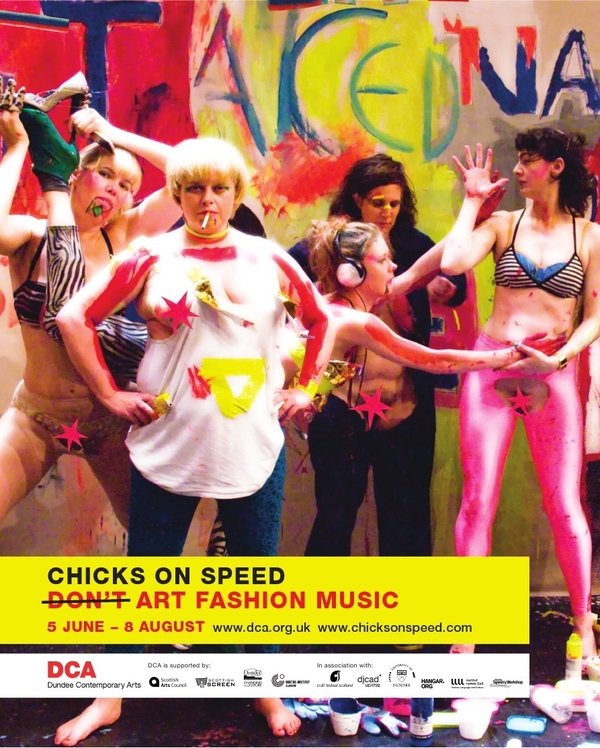 This is the first major solo exhibition in the UK of Chicks on Speed; an ever-changing multidisciplinary art group who apply punk-inspired DIY ethic to interrogate the boundaries of art, craft, fashion, music and new media.

Known globally for their melting-pot-style – encompassing cutting-edge pop music, performance art, a record label, collage graphics, painting and DIY fashion. Chick’s on Speed’s practice is chaotic and firmly against sedative art. With their tongues firmly in their cheeks, they are happy to court controversy.

The exhibition will open with a live art performance for invited guests on 4 June; featuring the ‘e-shoe’ – the world’s first wireless high-heeled shoe guitar, made in collaboration with Siberian-born shoe designer Max Kibardin and Hangar.org. These shoes will be unveiled alongside Chicks on Speed’s ever-growing collection of self made ‘objekt instruments’ – cigar-box synthesizers, super suits with sewn-in body sensors that trigger audio/video samples and two hats made in collaboration with Christophe Coppins and Hangar.org, based on illuminated drawings of Hildegard von Bingen, a 12th century Christian mystic who received visions, composed ethereal airs, performed healings and even founded convents. These hats transmit the utterances of their wearers by way of microphones and speakers.

The DCA galleries will be further transformed into a giant stage and studio set for making music videos, experimenting with no-choreography and ongoing craft projects live, including loom-weaving inspired by Bauhaus design, lectures and workshops, film screenings of their fashion archive and selected video pieces. Chicks on Speed have been working with local and international artists and makers to combine traditional craft with cutting-edge technology.

Further highlights include a Theremin tapestry based on theremin technology, woven by The Victorian Tapestry Workshop, Australia, with hardware from Andre Smirnov @ the Theremin Institute in Moscow in conjunction with hangar.org. A series of print based artworks produced with the DCA print studio and Fashion Archive.

Judith Winter, curator of the exhibition said: DCA are interested in working with artists that challenge the institution and the context of the gallery. Chicks on Speed’s practice blurs the boundaries between creative disciplines but much more than that - their work counters political correctness and employs a range of feminist strategies that support creative radicalism. I wanted to see if we could also hint at some of the connections in their practice to the history of interdisciplinary practice.

Many of our early discussions were around the Bauhaus and in particular Oskar Schlemmer performance of the Triaddich Ballet. Conversation soon transgressed to the status and visibility of women within the Bauhaus - on to activism and early modernist performance through to conversations around the political actions of Valie Export in the 1960s. Anyone who is also interested in fashion or wanting an anecdote to global consumption should enjoy some element of the show. We are looking forward to the unexpected!"

To coincide with the exhibition DCA are co-producing a book with Booth-Clibborn Editions that will be launched in September 2010. There will also be a series of events, films and workshops surrounding the exhibition.
More information
http://www.chicksonspeed.com

The exhibition is part of Craft Festival Scotland.

Featuring exhibitions, workshops, debates and symposiums, the festival aims to challenge existing views on craft, attract new audiences, showcase the talent and skill of Scottish craft makers, and encourage debate around the craft sector.
Craft Festival Scotland was the product of a five year Past, Present & Future Craft Practice (PPFCP) research project based at Duncan of Jordanstone College of Art & Design, University of Dundee.

The symposium explores the radical and multiple ways that creative people are experimenting with ideas, and will nurture unusual conversations by presenting a diverse range of perspectives concerned with innovation and ingenuity.

Knowledge through Making will explore the methodology of making as a knowledge-based approach to material culture and innovation. This will be exposed though the work of the Past Present Future Craft Practice research project