The Surreal House explores the power and mystery of the house in our collective imagination. It is the first exhibition to throw light on the significance of surrealism for architecture. Bringing together over 150 works, the exhibition also reveals the profound influence surrealism has had on a host of contemporary artists, filmmakers and architects. Metal pod-like structures adorned with plastics, fabrics, found materials and handmade elements hang from the ceiling and walls, resembling a kind of utopian, plug-in city. John Bock and a select group of actors periodically deliver live ''lectures'' using the installation as a set. 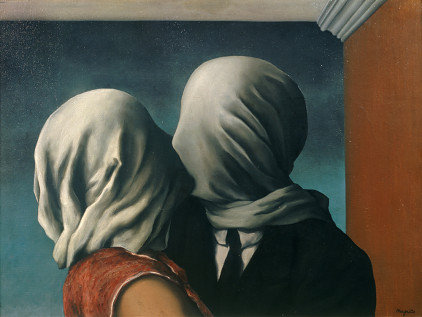 The exhibition is supported by Arts Council England and Institut für Auslandsbeziehungen.

This is the first major UK commission for the internationally acclaimed German artist John Bock. Bock is renowned for his humorous, eccentric and chaotic interventions that combine sculpture, film and his trademark performances known as “lectures”. For this new installation in The Curve, Bock constructs a madcap interpretation of experimental architecture.

Metal pod-like structures adorned with plastics, fabrics, found materials and handmade elements hang from the ceiling and walls, resembling a kind of utopian, plug-in city. Incorporated into the structures are a noodle bar, a clothes shop and a second hand shop alluding to the original plans for the Barbican’s Frobisher Crescent which were to include a shopping arcade one floor above The Curve. Bock and a select group of actors periodically deliver live “lectures” using the installation as a set. Travelling the length of The Curve, the driver of a motorised vehicle docks with each structure and interacts with those working in the noodle bar and shops. Captured on film, these lectures are projected onto a screen as part of the installation throughout the run of the exhibition.

Bock’s work draws on a broad range of interests from economics, architecture, fashion, film, theatre, philosophy and music. In the early 1990s he gained recognition for his lectures – teetering on the brink of sense and nonsense. Using props such as chalkboards and overhead projectors, these lectures are quasi-scientific lessons commenting on the connections between art and economic systems. Remnants of the actions remain in the exhibition space as a suggestion of the event that has occurred. Videos documenting the lectures become integrated into the installations themselves and allow visitors to watch again as part of the works.

Film has become increasingly central to Bock’s work in recent years. In 2007 he delved further into the narrative structure of feature films with Palms. The 58 minute film initially seems to fit the conventions of a Film Noir road movie as two murderous protagonists travel the Californian desert in a classic convertible. The dialogue, a mixture of nonsense and philosophical meditations, along with bizarre homemade props soon reminds us of Bock’s distinctive style.

For four nights in 2006 Bock performed Maltreated Frigate, a piece inspired by the maritime disaster of the frigate Medusa in 1817, a gruesome tale of mutiny and cannibalism. In a blend of rock opera, theatre of the absurd, animated sculpture and puppet show, Bock tells this story in a fast paced, outlandish performance. Situated in Magazin, the four storey storage warehouse of the Berlin State Opera, the central prop is a converted police van suspended from the rafters of the building’s atrium. In ten scenes, where the live action is extended to the catacombs of the theatre the artist and actors play out Bock’s version of the tale using his own characteristic array of props; a bicycle wheel, a milk pump, life-size dolls. Accompaniment from the live band, Blackmail, interspersed with Bock’s lectures and live video of the action projected onto large screens create a wild performance.

The Surreal House explores the power and mystery of the house in our collective imagination. It is the first exhibition to throw light on the significance of surrealism for architecture. Bringing together over 150 works, the exhibition also reveals the profound influence surrealism has had on a host of contemporary artists, filmmakers and architects. In an ambitious installation by acclaimed architects Carmody Groarke the exhibition is designed to be experienced as an extraordinary surreal house in its own right. The Surreal House opens on 10 June 2010.

For the Surrealists the house was more than ‘a machine for living’, as identified by Modernist heavyweight Le Corbusier. Instead it was a ‘stage for living’, a convulsive theatre of the domestic; a real space, inhabited, if not by people, then by their ghosts. In The Surreal House all the exhibits show the significance of the unconscious world of dreams and desires, presenting extraordinary dwellings that reflect everything that the rational, sanitized house sacred to Modernism is not.

Combining works of the imagination with important examples of actual ‘surreal’ houses, the exhibition presents a diverse range of paintings, photographs, films, models and installation from public and private collections in Britain, Europe, Canada and the United States, many rarely seen in the UK. The Surreal House brings together first generation Surrealists, precursors and close associates, with contemporary artists and architects. Iconic works by Salvador Dalí, Marcel Duchamp, Alberto Giacometti, and René Magritte are set alongside works by Giorgio de Chirico, Le Facteur Cheval and Edward Hopper as well as contemporary works by artists such as Louise Bourgeois and Sarah Lucas. F ilmmakers include Maya Deren, Jean Cocteau, Andrei Tarkovsky and Jan Švankmajer , whilst modern and con temporary architecture is represented by John Hejduk, Coop Himmelb(l)au, Rem Koolhaas , Bernard Tschumi and Diller & Scofidio.

The exhibition opens with Buster Keaton and Marcel Duchamp. American filmmaker Keaton, much loved by the Surrealists, is famed for his absurd lyric humour and extraordinary stunts. In Steamboat Bill Jr, 1920, a clapboard house famously falls on top of Keaton in a moment of sheer, heart-stopping madness; while in The Scarecrow, 1926, all the functions of the house are hilariously compressed into one room. Prière de toucher,1947, by Marcel Duchamp, is a relief of a woman’s breast mounted on a cloud of black velvet. Originally the front cover of a luxury edition of a surrealist book, here it signals the doorbell to The Surreal House.

Representing the inside of a house, the lower galleries take the visitor on a labyrinthine journey through a series of intimate chambers of varying scale that evoke different rooms including the bathroom, toilet, bedroom, salon, nursery and cellar. Linked by passages, these interiors are characterized by dark and light, sound and silence, compression and expansion. Down a dimly lit passageway someone singing opera can be heard from behind The Toilet in the Corner, 2008, an installation by Russian artists Ilya and Emilia Kabakov. Concert for Anarchy , 1990, by German artist Rebecca Horn, is a grand piano suspended upside down from the 6 metre-high Gallery ceiling. A mechanism within is timed so that every few minutes the instrument erupts into action, with the lid flying open and the keys jutting out in a cacophonous shudder.

Further themes explored downstairs include Femme Maison, epitomized by the work of Louise Bourgeois and The Haunted House, featuring Edward Hopper’s masterpiece House by a Railroad, 1925. Other highlights include the entire series of 19 black & white photographs, shown together for the first time, from La Subversion des Images ,1929-30, by Belgian photographer Paul Nougé’s; a powerful group of haunting images by Francesca Woodman; Sarah Lucas’ unforgettable piece Au Naturel ,1994; and a whole room installation, The Wait, 1964-65, by Ed Kienholz, never before seen in London.

On the upper level, circumnavigating the hidden chambers below, the visitor is metaphorically transported to the rooftops of The Surreal House, a space consisting of eight individual bays devoted to a dialogue between surrealist pieces, contemporary art and architecture. This part of the exhibition opens with Salvador Dalí’s iconic and rarely seen painting Sleep,1937 , featuring a giant disembodied head, held precariously aloft on the ‘crutches of reality’. Behind the closed eyelids is the hidden domain – the home of dreams. If the crutches give way, then the head falls to the ground and the dreamer is awoken from their slumbers. Juxtaposed is a film of Villa dall’Ava, France, 1996, designed by Rem Koolhaas, who acknowledges a huge debt to surrealism, and OMA (Office for Metropolitan Architecture). This impressive dwelling with a rooftop swimming pool, teetering on giraffe-like legs, is in every sense a contemporary reflection of Dali’s delirious dream painting.

Celebrated by the Surrealists as a kindred spirit, French postman Ferdinand Cheval spent 33 years making his dreams of to create an imaginary castle come true. The Palais Idéal, 1962, with heavily ornate cave-like entrances, is an extraordinary accumulation of architectural elements that seem to emerge from under a thick layer of solidified lava. Some structures are more temporary, for example, Dali’s Dream of Venus Pavilion, a surrealist funhouse created for New York World’s Fair 1939, featuring scantily clad ‘liquid ladies’ in an enormous tank and a 36 foot bed with a sleeping Venus. Other extraordinary houses or set designs, often enhanced by the powers of illusion, are created by filmmakers to be captured forever on celluloid. For example, Jean Cocteau’s marvellously poetic film La Belle et La Bete, 1946, features the beast’s strange and magical castle, with candelabras fashioned out of living arms, supported by sculptural columns of Greek goddesses with moving eyes.

The exhibition is punctuated with powerful cinematic images of houses under attack or magically transformed as if in a dream. It concludes with the hauntingly beautiful sequence of filmmaker Andrei Tarkovsky’s last film,The Sacrifice, 1986, in which Alexander, the protagonist sets fire to his dacha, a Russian country house and symbol of all that he holds dear.

ART GALLERY SHOP
The Art Gallery Shop presents an amazing array of inspirational objects, books and curiosities, all reflecting the ongoing influence of the surreal aesthetic.

BARBICAN ART GALLERY
One of the leading art spaces in the UK, Barbican Art Gallery presents the best of international visual art with a dynamic mix of art, architecture, design, fashion and photography.