Martin's projects investigate the state of contemporary society, with a recurring focus on themes of bureaucracy, commerce, economy and corporate culture. It is the first appointmenti with 'The Bay Window. Six Artists in a Frame', curated by sybin. 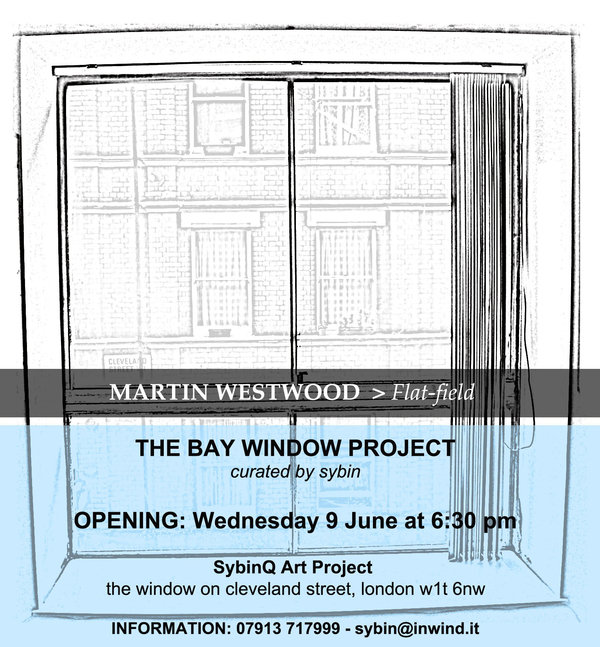 A new exciting project space is opening in Fitzrovia, but this time it's not another commercial gallery.

Why: A private residence with tenants. A square bay window that overlooks the street, looking like a huge frame hanging on an anonymous building’s façade. When the curtains are open, from the street it is possible to gaze-peeping inside other people’s home and lives. Derived from its shape and meaning, the bay window has been designated as a functional place, like a white cube – to host art. This unusual, limited space (193 x 180 x 60 cm), which is visible from the street only, is offered to six artists to create, one after the other, a site-specific work, engaging with the concepts of home and gallery, private and public, gaze and voyeurism, disruption and continuity.

sybin is a young curator based in London and interested in supporting young and established artists, especially through the creation of peculiar show settings outside the so-called normal exhibition parameters. One interesting aspect about this is being able to bring art into the street, like an open-air gallery, for every passer-by to enjoy. SybinQ Art Project is a not-for-profit association aiming to create networks and sustainable conditions for the commissions of new artworks.

The first artist invited to exhibit in The Bay Window is MARTIN WESTWOOD (Born in Sheffield, 1969. Lives and works in London).

Martin’s projects investigate the state of contemporary society, with a recurring focus on themes of bureaucracy, commerce, economy and corporate culture. He created complex systems of codes and symbols that incorporate and reference familiar objects – suspended ceilings, watercoolers, chequebooks, promotional balloons, invoice sheets - artificially decomposed and then reconstructed. His artworks vary in scale and format from large installations to paintings and multi-layered collages.

For The Bay Window Project, Martin is presenting Flat-field, a work which takes inspiration from the social relations we experience every day. The eye is captured by the bright background, on which different images, deprived of their three-dimensional status, are reduced or enlarged to the same size. The viewer can recognise objects, details, places and situations we are so familiar with that we experience them almost automatically.

The street, the advertising signs, the private dimension of the window switching to public: everything constitutes a hierarchy of objects that the artist is trying to disassemble and analyse on the base of the Actor Network Theory (ANT) studies. Developed, among others, by Bruno Latour, ANT is a branch of Sociology trying to map relations that are at the same time material (between things) and semiotic (between concepts), and tries to understand how certain relations (networks), which imply human interaction with inanimate things, are formed and kept. If a network ceases to work, each single element in it can be examined and re-interpreted: as Latour puts it, speaking about Pandora's Box, when closed it is perceived as a box, whereas when opened the elements inside are visible.

It is about communication, the messages we give and receive in the working and private dimension, the signs we interpret and how unwittingly we relate to all of it, performing our social interactions over and over again to avoid our created network to dissolve. This is the artist's aim in The Bay Window to present a flattening out of the hierarchy that organises social relations, to suggest a suspension of the performance of the social.

Part of The Bay Window Project is also the creation of The Fitzrovia Map, which will be available on line soon and highlight places of interests in the area, from the famous art galleries to the less known landmark buildings, from fancy restaurants to interesting shops.

SybinQ Art Project
Please note that The Bay Window has no physical address
It can be found on Cleveland Street, London W1T 6NW.
Go where Cleveland Street meets Carburton Street.