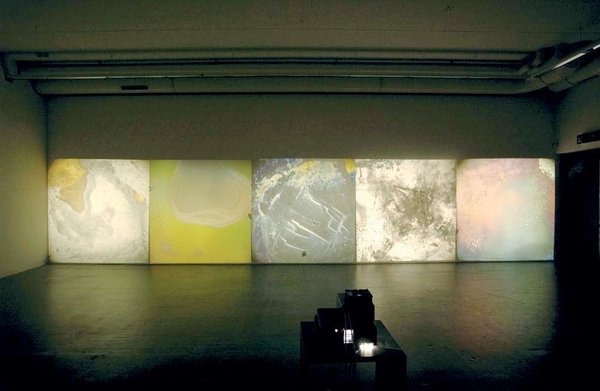 In a time of increasing media dominance, where we are exposed daily to ever greater amounts of data, and our sense of time is steered seasonally and by the speed of the fashion and design industries (amongst others), even the most up-to-date things rapidly become outmoded. In this context, the preoccupation with history appears to offer a possibility to pause and slow down. This year the renowned ars viva exhibition, organised by the Kulturkreis der deutschen Wirtschaft, awarded prizes to Mariana Castillo Deball, Jay Chung & Q Takeki Maeda and Dani Gal, artists who have converged anew on the term “history”, accommodating societal developments not purely attributed to confusing and increasingly rapid forums of communication.

Mariana Castillo Deball, Jay Chung, Q Takeki Maeda, and Dani Gal examine historical fragments, documents, and objects under a new light. The artists take on the roles of amateur archaeologists as they work with found objects and fragments; even though it is clear that all four prizewinning display an obvious interest in historical objects, not one of them actually provides any sort of conclusion about history as a whole. Rather, they play an associative game, which formally resembles Aby Warburg’s Mnemosyne Atlas, while reflecting upon personal encounters with objects and places.

Of course, the exploration of history is not unknown to contemporary art. At the latest, the philosophical movements of the nineteen-sixties questioned the construction of history, its claims of truth, and its canonization. They developed narrative models that broke with the notion of linear history and its models. Conceptual artists of the nineteen-sixties and seventies and apporiation artists of the nineteen-eighties worked with these ideas and consciously veered away from the old strategies for writing history. Ever since then, previously ignored historical events and little-known narrative forms have become more interesting objects for artists. In the past as well as in the present artists have employed media such as text collages, commentary, documentation, or interviews, but nowadays, these methodical approaches are not primarily used as means for discovering the truth or for didactic explanations.

After the questioning of the truth behind ways of representing history, as well as the social structure they are supposed to illustrate, it almost seems as if this approach represents the smallest possible common denominator that can still be agreed on. Historical objects are taken out of their original contexts, put into an arrangement, and then positioned in relation to other things. In the process the artists reflect not only the conditions that determine museum presentations and displays, but also question their facticity, their purely documentary character, in a new environment. Thanks to the different ways they are presented, these objects develop their own emotional and imaginary potential. In a few cases, they even raise their own voices and tell their own subjective histories.

ars viva-prize: Since 1953 the Kulturkreis der deutschen Wirtschaft at BDI awards the art prize ars viva to promote young artists. Every year a new thematic focus gets chosen to emphasize the actuality of the prize. More information on: http://www.kulturkreis.eu

ars viva 09/10 is a project of the Kulturkreis der deutschen Wirtschaft at BDI, in cooperation with Museum Wiesbaden, Kölnische Kunstverein and migros museum für gegenwartskunst.

This collection presentation emphasizes on its space-filling, performative installations. Purchasing for the collection has resulted largely from exhibition productions, or working with the artist. In this way it has been possible to acquire various large installative works.

For the performance of The Fall of Man, A Puppet Extravaganza, first shown at the Tate Triennial in 2006, Spartacus Chetwynd (*1973 London) constructed a complex stage installation. As a reference point she used a traditional theatrical set with a central perspective, a style that was at its peak in the theater of the Baroque period; by curtailing the perspective it creates an illusion of spatial depth. In the center of Chetwynd’s work stand two tables with models of landscapes, each referring to a literary source – one to John Milton’s Paradise Lost (1667), the other to Die deutsche Ideologie (1845/1846) by Karl Marx and Friedrich Engels. One depicts a vision of Paradise together with the implication of the lapse into sin (The Fall of Man), the other the city of Utopia, the dwelling-place of the ideal society. The entire stage set is constructed using simple bricolage – ordinary materials like cardboard, plastic pipes and photocopies are dominant. Here the concept of bricolage is understood not only in its traditionally artistic, formal and esthetic function, but as in Lévi-Strauss’s treatise La Pensée Sauvage (1962) as a process in which an object with a specific socio-cultural connotation is conveyed, acquiring to a new cultural identity. The concept also implies that prefabricated, formal instruments are not readily available, but that the approach is based on an explicit delight in experimentation – thus “savage thinking” is a mental function that does not (yet) have rational and analytical capacities, but does have combinatory ones. Hence the performance did not use traditional puppets, but was “performed” by vegetables, fulfilling an abstracted representative function. With her “savage thoughts,” Chetwynd not only reconstructs and deconstructs elements of theatrical history, but takes the virtual representation of power and culture as her theme.

Gustav Metzger's (*1926 Nurenberg) Liquid Crystal Environment (1965–1998) was premièred at a rock concert by The Who at the Round House in London in 1966. His kaleidoscopic liquid crystal structures provided a psychedelic stage set. Metzger developed his idea of "Auto-Destructive Art" in the 1960s atmosphere of social upheaval. He produced five manifestos discussing the state art was in and where it might go after the Holocaust and Hiroshima. Metzger was faced with the possibility of his own annihilation even as a child: he was born in Nuremberg in 1926 to Polish Jewish parents. He managed to escape from Fascist Germany with his brother in 1939, but almost all his family were murdered by the National Socialists in subsequent years. Metzger trained as a cabinet-maker and studied at various European art colleges. He has lived in London almost continuously since then. His strategy for winning back some territory for art lay initially in creating "Auto-Destructive Art": art with a self-destruction mechanism built into it, which constitutes itself in this way. He later extended the idea by adding the dimension of auto-creative art, of which Liquid Crystals is an example. Behind such works is the concept of a work that can create in its own right, without the artist's guiding hand. The artistic act, although set in motion by a human being, is afterwards left to chance. At the end of the 1990s, the Liquid Crystal Environment was reconstructed for the first time. By means of manipulated slide projectors fitted with rotating devices, the work is now projected over a large surface onto the walls of the exhibition area.

Katharina Sieverding’s (*1945 Prague) work Transformer (1973–74) circles around the complex and multi-layered question of individual identity and its relation to existing social structures. As in many of her works, the artist’s self-reflecting gaze at her own physiognomy is the point of departure for an artistic interpretation of prevailing social conditions. Transformer is a compelling installation of slides with eight projectors alternating simultaneously at random intervals. It was created for the legendary exhibition of the same title at the Museum of Art Lucerne in 1974. Its theme was travesty, and Sieverding was the only female artist included in it. On a variety of slides, each differing in lighting, poses and contrasts, double exposures show the artist’s face overlaid with that of her partner Klaus Mettig – thus creating a fictitious, androgynous face that looks sphinx-like and spectral. Each minimal change produces a new expression, in a continuous transformation of changing identities.