RE.Flecks. Metamorphoses of the Invisible. From the beginning his artistic-architectural practice Jurgen Mayer H., founder of J. MAYER H. Architects, has been collecting data encryption patterns typically used to obscure confidential information, employing them in a modified form in his spatial installations and facade designs. The two-dimensional patterns form a point of departure for his sculptural and spatial concepts, so that the patterns used take on the function of a graphic enclosure. 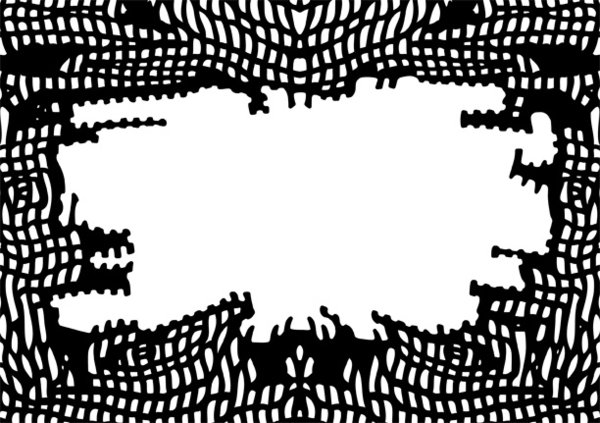 J. MAYER H.’s work is characterized by transformation, fragmentation, and the concealing and revealing of information.

From the beginning his artistic-architectural practice Jürgen Mayer H., founder of J. MAYER H. Architects, has been collecting data encryption patterns typically used to obscure confidential information, employing them in a modified form in his spatial installations and façade designs. The two-dimensional patterns form a point of departure for his sculptural and spatial concepts, so that the patterns used take on the function of a graphic enclosure.

Playfulness plays a significant role both in the way Mayer selects the patterns and they way they are eventually used in his artwork. J. MAYER H. bases his work in the RE.FLECKS exhibition on a camouflage-like data encryption pattern showing a transfiguration into various forms. Some of these can be seen in the form of images that, in a reference to the Rorschach test developed by Swiss psychoanalyst Hermann Rorschach, can be read and interpreted in different ways.

Even as a child Rorschach loved a game he called “klecksography,” which involved dropping watercolors or ink on a piece of paper that was then folded in the middle. Because the paint is still wet, the resulting shape is also reflected in a print on the other side of the fold. In it, one might see a bat, a butterfly or even a lung. In 1917 he heard from his colleague Szyman Hens, who inquired about subjects for the so-called “Klecks pictures” they had created, inspiring Rorschach to develop his own series of experiments. Five symmetrical, colored and five black and white pictures were shown to 300 psychiatric patients and 100 people who qualified as “healthy.” The pictures were shown in a certain order, and subjects were told that they could turn them around anyway they chose. Asked the question “What could this be?” and told that there or no wrong or right answers, participants were asked to name what they associated with the “Klecks pictures.”

The evaluation process for recognizing forms refers to what Rorschach claimed was a human tendency to project one’s own thoughts and feelings on ambiguous stimuli. The frequency of various interpretations according to color, form, movement, details or the whole, human or animal is evaluated on the basis of specific factors. An interpretation based on these forms displays an intelligent, perhaps compulsively exacting character. Few movement-related interpretations indicate depression. Rorschach’s analytical procedure continued to be used after his death in 1922 and influenced generations of psychoanalysts.

J. MAYER H. utilizes these projections and from them develops a self-contained, endless field of pattern. The camouflage-like data patterns on view in the RE.FLECKS exhibition are, like the Rorschach tests, open to interpretation by the viewer. What is more, the images on view at magnus müller stand in opposition to each other, entering a dialogue. But it is not only the game of formal creation and the relationship of two-, three- and four-dimensionality, like Rorschach J. MAYER H. actualizes a kind of pseudo-scientific discipline that invents its own rules. From this, J. MAYER H. creates a visual diversion that uncovers the hidden and latent.

In these pictures the process of personal projection and understanding shown in the artist’s architecture takes on the quality of an enclosure, forming on a life of their own through their realization as sculpture. This is also reflected in the JOH3 structure in Berlin, where a cloud-like, wave-like, infinite pattern forms the façade, likewise the Metropol Parasol in Seville, which is reminiscent of an oversized umbrella. Here the camouflage-like data encryption patterns experience a further transformation and succeed in dissolving borders in their permutation as architecture. As with the sculptures in RE.FLECKS, openings in the façade create interim spaces that open themselves to interpretation and associative possibility. Establishing a boundary between the visible and invisible, material and immaterial appear impossible, lending J. MAYER H.’s architectural sculpture their ephemeral character.

RE.FLECKS will be exhibited afterwards from july 29th – september 17th 2010 in Munich at magnus müller temporary.