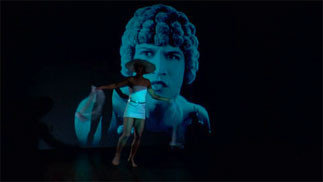 The Centre d’Art Contemporain Genève is pleased to announce the first major solo show by the duo PAULINE BOUDRY/RENATE LORENZ. These Berlin-based artists have an interest in the almost simultaneous invention of sexuality and sexual perversions on the one hand, and photography and film in the 19th century on the other hand, as well as in their relationship with the colonial economy. Mostly filmed in 16 mm and featuring distinctive aesthetics that highlight the autonomy of the camera, music, costumes and props, the work of PAULINE BOUDRY/RENATE LORENZ gives rise to performances that they define as "queer archaeology".

They rediscover forgotten moments in history, in which non-standard bodies and social constellations are visible. The duo will present numerous recent works, including "Salomania" featuring American choreographer and artist Yvonne Rainer, as well as a new production based on epileptic dance. As a counterpoint to the installations, their show includes "invited" oeuvres by Felix Gonzalez-Torres, Judith Hopf, Zoe Leonard, and Henrik Olesen, which also question identity and its representation.

The Centre d’Art Contemporain Genève is pleased to present DAVID HOMINAL’s solo exhibition. His work entirely revolves around the painting medium, interrogating its traditional constitutive elements (canvas, stretcher, oil painting, etc.), as well as the various related historical genres. DAVID HOMINAL’s work sometimes litterally gushes out of the frame and the format of the painting, turning into installations or performances. He is inspired by current events and transposes elements from a tough, often autobiographical reality into strong and poignant works.