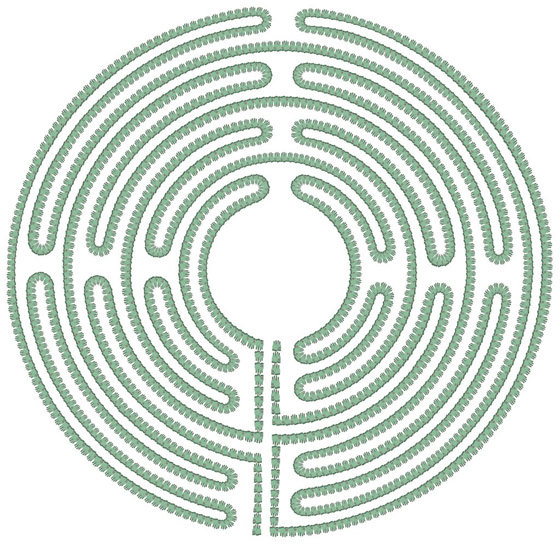 A wooden car tire, with the first words of the familiar rosary as its tread, that begins to rotate like a prayer wheel when touched lightly... a manipulated Porsche motor, combined with a sound montage (cooperation with Bernhard Schreiner) that mixes the lush sound of the engine with the sing-song of a group of women at prayer ... an isolated pair of windscreen wipers that move like a portent in front of a white wall, while chanting a scourging "Pray for us" in time to the rhythmic back-and-forth... a silkscreen that reproduces the labyrinthine structure of the famous floor mosaic of Chartres Cathedral and transforms it into a water-bottling machine ...

In this exhibition Thomas Bayrle, who has been occupied with mass phenomena of all kinds since the 1970s, brings together in a higher sense the central artistic and intellectual strands of his work. Formal aspects such as monotony and repetition, consistent constructive principles -- for example in his well-known collages and silkscreens, come together in a kind of machine-like parallel circuit encompassing the themes of religion, mass mobility and economics, which Bayrle has commented and interpreted in his work for many years now.

"For a long time the 'Western' equivalent to 'Eastern' meditation was prayer. Its forms range from deep ardour to literary hedging and quarrelling with God. -- In the semi-darkness of the church old women say their rosaries. Crowded together on the pews, they murmur like an eerie stream. They are a humming collective body that -- endlessly, slowly -- moves bead after bead through its hands. They are working a great web and they murmur and weave for hours. (I almost forgot) In the frenzied din of the factory floor -- of the Gutmann weaving mill in Göppingen -- the murmuring of the women came back to me in the sing-song of the machines. At a certain frequency, the crankshafts of the automatic looms sang 'humanly'. Like 2 clutch plates, the songs approached and joined with one another. So the voices came from within ... the murmuring as bass line melted into a unity with the wailing metal. So I sing-song through the hours and days -- and could hibernate for 1 year. -- In the discos too -- or drivin' the car -- this secret sing-song crept in ... as if the women were embedded deep within the gearbox and emanating outwards through the vibration. Or as an imbalance of the tires -- who understand -- that -- OUR FA THER WHO ART IN HEA VEN is in their tread -- and while they speed -- they pray ... in 300 km ... 1,244,000 times."

For her second solo exhibition at the Galerie Barbara Weiss, Dance School for a Marionette, Suse Weber (*1970) -- following her /FORMEL:KONGORAMA#3/Puppet Theatre/ at the WIELS in Brussels -- has conceived a stage-like scenario in which she herself appears regularly at set times.

Taking her lead from the concept of /emblematic sculpture/, as she terms her three-dimensional works, Suse Weber treats the audience as an existing factor in the overall scheme along with the sculpture and the space itself: the audience becomes material. In Weber's configurations its entrance into the space, the allocation of seating and the determination of the viewing time reflect a conditioning we also know from the signs and symbols of the traffic regulations.

In the gallery the viewer is awaited by two rostra of seats and an approximately two-metre-high MDF figure on wheels, with numerous plug-and-socket devices. On the walls of the exhibition space hang folkloristic holders made from punched cardboard, in which Suse Weber has deposited around 380 coloured visual building blocks according to a certain order. Their composition features Weber's typical formulas and references, e.g. to the patterns of Baroque costumes, historical dance styles or political symbols. This material, which can largely be traced back to previous works by the artist, and is based on research carried out at the Leipzig Dance Archive and elsewhere, determines the action in the Dance School for a Marionette. And the exhibition space itself becomes a social space through the significances of the visual building blocks.

When Suse Weber opens the dance school with an acoustic trailer (cooperation with the Belgian composer Tim Vets) on June 12, she sets the above scenario in motion according to her choreography. Between June 12 and 30 (every day at 4 pm) 14 marionettes will be created in this way.

In a second exhibition space Suse Weber will work in parallel on a notation to document the selection and application of the visual building blocks, and the new choreography of the marionettes each day.