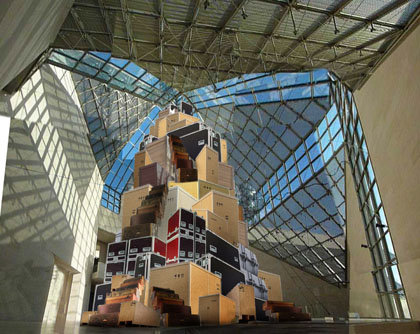 For the exhibition Sketches of Space, Mudam has invited eight artists to occupy the museum with projects specifically conceived for the occasion. Presented in all the rooms devoted to temporary shows, the installations enhance different approaches to the notion of space through their diversity.

Physical intervention to the architecture of Ieoh Ming Pei, game of construction and deconstruction, relating the interior to the exterior of the building, immersive environment, installation disorientating the viewer, response to the institutional context... Each of these propositions sketches another perception of the museum by redrawing its contours.

Faithful to her usual approach which consists of taking the context of her intervention as a starting point, Luxembourg artist Simone Decker has come up with a large-scale installation for the Grand Hall that echoes the previous exhibition, Brave New World (from the perspective of Mudam Collection). A tower, mostly composed of storage cases for artworks from the museum’s collection, allows visitors to climb to the heights of the Grand Hall and reach the summit of the atrium. From here, they may discover a new point of view on the building and the exterior, as well as on the collection and, generally, the museum as an institution.

German artist Michael Beutler intervenes in two places in the museum. For his installation Flip, presented in one of the ground floor galleries, the walls built after the museum’s opening (for the requirements of temporary exhibitions) are cut out and displaced by using steel structures in the shape of semicircles the size of the walls. Reclining flat on the structures, the walls now horizontally divide the space. In counterpoint to Flip, the artist has also modified the access to the rooms devoted to Mudam Collection by erecting (with the help of a lift-up table) walls of plaster and pieces of coloured paper produced in situ.
Ann Veronica Janssens : Untitled (Martin MAC2000), 2009, Vue d'installation, Wiels, © Photo : Philippe de Gobert

Numerous artworks by Belgian artist Ann Veronica Janssens explore the limits of perception of time and space using “immaterial” and evanescent elements such as light, sound or fog. “What interests me”, says the artist, “is what escapes, not to fix it in its escape but, on the contrary, to experience the ungraspable.” The installation she has dreamed up for the exhibition takes the form of a large screen crossing the gallery on which are inscribed, by back projection, luminous beams of different colours producing a rapid, almost hypnotic pulsation, liable to provoke retinal persistance in the eye of the viewer.

Lithuanian artist Zilvinas Kempinas has worked for several years with magnetic tapes from analogic recording materials to develop installations which, by extending the research of kinetic art and op art in the 1960s, play with our spatial perception. White Noise is composed of a multitude of magnetic tapes arranged in the space so as to form a screen which, lit from behind and animated by air currents, produces vibration effects that recall the “white noise” that appeared on badly tuned television screens. In his installation Ballroom, visitors are invited to move through an environment featuring red and blue lights, magnetic tapes and reflective surfaces put in motion by suspended ventilators in such a way that spatial bearings are disturbed.

In his video installations, Austrian artist Peter Kogler superimposes onto exhibition spaces virtual spaces in which recurring motifs (ants, rats, abstract shapes...) proliferate and invade the walls, floor and ceiling. His installation for Sketches of Space is composed of a 360° projection, covering all the gallery wallspace, thus presenting a virtual environment in which viewers are invited to immerse themselves. The initial motif in this case is an abstract grid, composed of a mesh of ligns in perpetual movement, in which organic shapes appear and disappear. The space progressively dissolves through the transformations.

The installation by French artist Vincent Lamouroux takes as a starting point a series of fictional architectural structures described by Edgar Allan Poe in three texts written in 1840, The Domain of Arnheim, Landor’s Cottage and The Philosophy of Furniture, that his first French translator, Charles Baudelaire, aimed to bring together in a collection with the evocative title Habitations imaginaires (Imaginary Dwellings). The modules created by Vincent Lamouroux from these descriptions dialogue with the particularly stated style of Pei’s architecture.

Since 2002, Italian artists Raffaella Spagna and Andrea Caretto have developed a joint practice that explores the relationships that link humans to their natural environment. Their projects, which are often long term ones, give rise to installations presenting their recent investigations and experiments concerning questions including the transformation of matter, the notion of ecosystems, the process of morphogenesis, the domestication of natural elements and the relationship between wilderness and cultivation. For Sketches of Space, Raffaella Spagna and Andrea Caretto are presenting an installation conceived as a network of “isles”, mainly concerning shapes generated in an autonomous way by certain natural elements, be they organic or mineral.

Y8 looks at the possibility of establishing the philosophy and practice of yoga within art by transferring it to the architecturally and socially codified context of exhibition spaces. Each session starts with an introductory talk followed by a practice of breathing, postures and relaxation.

How we perceive and experiment an exhibition space and the works of art in it, is a basic point in the practice of the artists' couple Benita-Immanuel Grosser. In their yoga center, they invite each year one artist (Katharina Grosse, Angela Bulloch...) to invest their space of practice, to divert it and allow the participants to establish a privileged bond between the practice of yoga and artistic creation.

Invited in 1995 by the Gallery Pat Hearn in New York, they then decide to develop, under the title Participating, at the same time, yoga lessons amongst the works of art on display. It is the beginning of a series of interventions in various art venues.

Through meditation and relaxation, a new, temporary place is created, gradually blurring the border between body and space. With the rise of concentration and body control, physical sensations mingle with the perception of the environment. Without intervention neither on the architecture nor on the scenography of the space, the participants take on a process of widening of existing space. Thus its perception, like that of works of art, changes. The only visible trace of these meetings: a white grid spread on the ground, corresponding to place of the mats of the participants.

Performance with the public's partecipation for the vernissage