Condensations of the Social

On show artistic projects that refer to the strands of the social that contribute to the formation of culture: pedagogy, ritual/performance, political and ideological engagement, work, and ecology and sustainability as they relate to place. The exhibition includes projects by Pablo Helguera, Mary Mattingly, Mladen Miljanovic, Tim Rollins + K.O.S., Mierle Laderman Ukeles, and a group of nine artists who are students of Harrell Fletcher and Jen Delos Reyes within Portland State University's MFA concentration in Art and Social Practice. 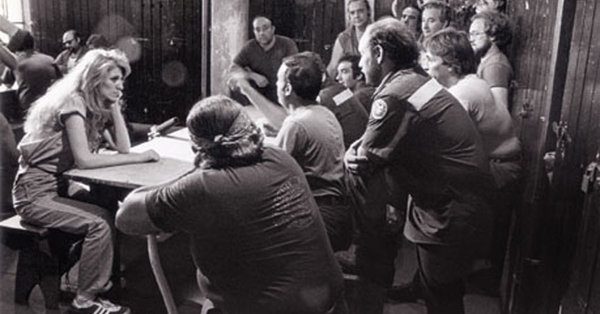 Smack Mellon's summer group exhibition Condensations of the Social will feature artistic projects that refer to the strands of the social that contribute to the formation of culture: pedagogy, ritual/performance, political and ideological engagement, work, and ecology and sustainability as they relate to place. The exhibition raises questions about the boundaries between art and life, while suggesting that social practice, to a greater degree than traditional art forms, has the potential to directly change how we live. The exhibition includes projects by Pablo Helguera, Mary Mattingly, Mladen Miljanovic, Tim Rollins + K.O.S., Mierle Laderman Ukeles, and a group of eight artists who are students of Harrell Fletcher and Jen Delos Reyes within Portland State University's MFA concentration in Art and Social Practice. Exhibition curator Sara Reisman selected artists with the intention of linking current artistic practices to two historical nodes - the work of Rollins and Ukeles - which serve as early examples of terms that have gained important currency in contemporary art: the pedagogical turn, relational aesthetics, participation, life art, and collaboration, among others. Condensations also explores the contradictory qualities of the medium by bringing together a variety of artworks and approaches that range from altruistic and outside the art world to socially motivated from within the art system.

In 1969, Mierle Laderman Ukeles wrote the Manifesto for Maintenance Art, 1969! that is still exhibited and taught today. Since 1977, when she became the official, unsalaried artist-in-residence at the New York City Department of Sanitation—a position she still holds—Ukeles has created art that deals with the endless maintenance and service work that “keeps the city alive:” urban waste flows, recycling, ecology, urban sustainability and our power to transform degraded land and water into healthy public places. Condensations will feature materials from Ukeles' project Touch Sanitation in which she personally thanked 8500 sanitation workers for maintaining the city soon after her residency at Sanitation began.

Mladen Miljanovic's project I Serve Art is a more intimately scaled project that documents the artist's time in isolation following his military service in Bosnia-Herzegovina, a nine-month transition from serving in the military to becoming an artist. The project explores the tensions between obligation and desire, and between national identity and creative practice.

Having taken to the water in an experiment in sustainability with The Waterpod in 2009, Mary Mattingly is still focused on how we can respond to rising sea levels, this time by testing the limits of living on land. Within Condensations Mattingly will present a living prototype for Flock House, an airborne habitat that imagines, projects, and adds another level onto the city’s skyline. Built on materials that reference scaffolding, a construction material associated with changing cities, Flock House augments city space, air space, and questions air rights and functions as an observation deck with a view of weather systems and avian migration. Flock House is a collaboration with Kadar Brock and Stephanie Gonzalez-Turner, Ian Daniel, ecoarttech (Leila Christine Nadir and Cary Peppermint), Kelly Loudenberg, and Tressie Ward.

Through his teaching in the Bronx in the early 1980s, Tim Rollins discovered that his students responded to art - art taught his way, not the way it is usually taught in public schools. Some of Rollins' students became a group of regulars who participated in an after-school and weekend program called the Art of Knowledge Workshop. The students named themselves K.O.S. which stands for "Kids of Survival." Early ephemera from Rollins' work with K.O.S. will be included in Condensations.

Eight students — Katherine Ball, Constance Hockaday, Ariana Jacob, Hannah Jickling, Helen Reed, Michelle Swinehart, Lexa Walsh, and Jason Zimmerman — from Portland State University's MFA concentration in Art and Social Practice are producing an indoor and outdoor banner project called Let Knowledge Serve the City. This will be activated by events meant to blur the gallery's function as a space of art and life. PSU's MFA concentration in Art and Social Practice is a program that encourages students to develop and utilize their artistic skills to engage in society. Students learn about a variety of working artists and non-artists who have engaged in civic activity, and apply their knowledge and abilities to initiate, develop, and complete projects with the public—individuals, groups, and institutions. The program is led by Harrell Fletcher and Jen Delos Reyes.

For Condensations, Pablo Helguera is developing an entirely new project: a variety show and podcast called The Art World Home Companion. Helguera explains that the variety show is "for those of you who feel lonely amidst the social choreographies of the art world, whose anxieties about professional issues generate unanswered questions that you are afraid to ask, who can't detach from Facebook and are a bit nostalgic of the time when you actually got to see and talk to people in person, but feel awkward at openings. It is for those of you for whom the art world remains inscrutable, who cannot understand why it is the way it is — who feel that our social rituals are slightly absurd and contradictory, our theorizing incomprehensible, our ethical behavior suspicious, our professional acting opportunistic, and yet who still ache to be part of it —this program is your friend, your companion and your Saturday morning sunshine."

The exhibition is accompanied by an essay on social and critical practices by Saul Ostrow.