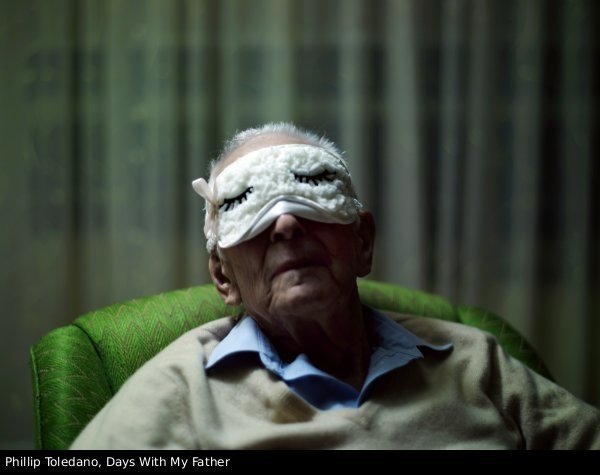 All my lovin' is an international exhibition showing photographic works concerned exclusively with "You and I". It is an exhibition about love, loving and being loved; about loved ones at home, by our side, or separated from us, those with whom we feel the deepest bonds of the soul, but with whom our everyday relations are often filled with conflict, so that we experience alternating emotional security and insecurity. All my lovin' speaks of human relationships in powerful and moving individual images and picture series. We see couples young and old, fathers, mothers, parents with their children, happy and unhappy people, strangers who approach strangers, and others who emerge from the prison of restricted thinking in order to show spontaneous sympathy and experience love.

Edith Maybin: The Tenby Document
The Tenby Document is the intimate expression of interaction between mother and daughter, but also a voyage of self-discovery via the other. In a house in Tenby, Wales in 2005, Edith Maybin began to photograph herself and her daughter, six years old at the time, wearing Marks and Spencer's ladies underwear - mother and child separately but in the same poses, often bridging the distance between them by means of digital processing that causes the bodies of mother and daughter to merge into one figure.

Lydia Panas: Family Pictures ... untold stories
Photographer Lydia Panas directs all her attention towards members of her family and friends. First and foremost, she produces portraits - sharply and precisely focused, and equally rich in emotional differentiation. In the case of the young people shown, she is interested in their transition into adulthood - with all the associated poses, coolness, complicated relationships and sudden plummeting moods. What seems "normal" emerges, upon closer examination, as a psychological study examining questions of self-acceptance, confidence and recognition among one's peers and in the family.

Elinor Carucci: Crisis & Closer series
Crisis & Closer is a cycle of images by Elinor Carucci which has developed from randomly selected body sections, dramatically accentuated detail shots, and stories of relationships, lost love and new, euphoric encounters. The photographer says that her work has been so full of personal highs and lows that it could be said to have had a truly "cathartic effect".

With kind support from the Governing Mayor of Berlin, Senate Offices - Cultural Affairs.

Patrick Bernatchez's latest series bears the working title "Lost in Time" and encompasses a large number of works that employ diverse artistic media. These are currently at very different stages of conception or realisation. A central element of the series is "BW (BlackWatch, 2010)", an unusual watch realised by Bernatchez in collaboration with the recognised clockmaker Roman Winiger. "BW" consists of an empty black watch-face with only one hand, which requires exactly one thousand years for a single revolution, so that its movement is imperceptible to the human eye. In Künstlerhaus Bethanien, Bernatchez is now presenting the first results of work on the "Lost in Time" project, entitled "Die Zeit Verschlingt" (Time Devours). The project interlinks tangible and abstract aspects of the phenomenon "time" and so creates a weave of differing dimensions of reality. Bernatchez's project is an invitation to immerse ourselves in the dizzying labyrinth of infinity, including those dimensions of time that are incomprehensible to man.

Patrick Bernatchez holds a fellowship from the Conseil des arts et des lettres du Québec and the Ministère des Relations Internationales du Québec in the context of our International Studio Programme.
With kind support from the representative of the government of Québec in Berlin.

Tine Oksbjerg
We will meet again but don't know when

Tine Oksbjerg's video works focus on the minor everyday stories that develop from encounters between people and social situations. In this context, Oksbjerg is particularly interested in the distinctions between social groups and communities and how people interact as social individuals within them. Oksbjerg's works can be read as extended tableaux or brief insights into a longer story that is never fully revealed to the observer. In her videos, Oksbjerg uses the seductive power of close-ups and detail shots, which are familiar to us from television or cinema.
In Künstlerhaus Bethanien, Tine Oksbjerg is showing the video installation "We will meet again but don't know when", which has been made during her stay in Berlin and is based on the "hairdressing salon" as a meeting place. The customers find themselves in a situation that is as intimate as it is impersonal or businesslike. Here, they often talk about personal matters and thus create a specific image of themselves, while their physical appearance is being changed by the hairdresser's work. Tine Oksbjerg deliberately chose hairdressing salons in Berlin from a wide spectrum of social environments and urban districts, and filmed the customers as they were being "beautified". The scenes are joined to a whole by the soundtrack, which distributes the recorded conversations through a triple projection of the visual material. In this way, Tine Oksbjerg creates a virtual community, in which social boundaries and codes are no longer significant.

Tine Oksbjerg holds a fellowship from the cultural region Fyn, Denmark. The video project has been supported by the Danish Arts Council Committee for Visual Art.

Robert Quint
If you want it to be right...

Robert Quint's works have both a seductive and a disturbing effect on the viewer, as they already convey - despite their beauty - a vivid sense of decay and decline. Quint's formal repertoire employs painting, sculpture, drawing and collage; thematically, the artist makes use of both the past and the present. In Quint's work, the clichés of innocence and lightness are turned around completely. Delicate lace borders are appliquéd onto a sky blue background - which looks beautiful, but in Quint's work also represents the threatening reality of so-called "chemtrails" - tracks of condensation from which poisonous kerosene additives rain down onto the earth. Robert Quint has made this and others of our sins against the environment into the subject of his series of works "11:55 h", and reflects on the fragility of the condition humaine - that of the artist and of man in general. In this context, the artist is also concerned with questions such as origin, its cultural values and how they are conveyed. Robert Quint examines the residue and relics of the past and makes them shine with new glory: in his oeuvre, for example, one often finds sculptures of castle ruins and fir-tree - like the ruins of past bastions, these trees are also symbols of German Romanticism, which Quint treats with repeated, subtle irony. Robert Quint is presenting a selection of his recently completed paintings, collages and sculptures with "If you want it to be right..." in Künstlerhaus Bethanien.