With Drawing Rooms. For this exhibition, the artist has taken over the entire 3rd floor of the gallery with new site-specific wall drawings. In addition, drawings, sketches, artist books and photographs from the late sixties until today give an insight into his work. Tremlett has been working directly on the wall since the end of the 1970s, he creates spaces using the ephemeral pigment of pastel crayons, the drawing comment or transform architecture. Curated by Sabrina van der Ley. 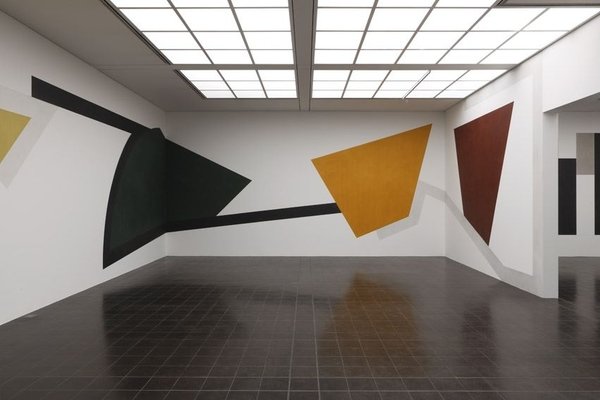 Wall Drawings for the Gallery of Contemporary Art

With Drawing Rooms the Hamburger Kunsthalle presents the first comprehensive show of the artist David Tremlett in a German museum since 1992. For this exhibition, David Tremlett has taken over the entire third floor of the Gallery of Contemporary Art with new site-specific wall drawings, which where drafted especially for this place. In addition, drawings, sketches, artist books and photographs from the late sixties until today give an insight into his work. Tremlett (*1945) is one of the most important British artists of his generation. He has had many exhibitions in renowned museums since 1960, like the Tate Gallery, London; MoMA, New York; the Centre Pompidou, Paris and the Stedelijk Museum, Amsterdam. Tremlett also participated in Harald Szeemann’s legendary documenta 5 and was nominated for the Turner Prize in 1992.

A trained sculptor he has been working directly on the wall since the end of the 1970s. David Tremlett creates spaces using the ephemeral pigment of pastel crayons. His wall drawings in museums, privat houses and public buildings, sacred spaces or ruins, are often forming an entity with their spatial context. The drawings trace the volumes, rhythms and proportions of the discovered architecture and comment on them or transform them. Tremlett shapes are lines and irregular geometric compositions, often reminiscences of landscapes, of floor plans or of signs. He abstracts them to imaginary and stylized plans and architectural shapes. His palette ranges from earth tones to strong colours like red, turquoise, blue and green. As a sculptor he is at the same time fascinated by the malleability of the pastels as he rubs them into the wall. "I am actually building something in my wall drawings, but within the surface”.

Although Tremlett sees himself clearly within the wall painting tradition, which in the case of frescoes aims for permanence, he has chosen to work in a fragile, transitory medium. It is exactly the ephemeral quality of pastels, appearing to contradict the traditions of the genre, which appeals to him: In his opinion the durability of an artwork exists in its idea. Noticeable is an affinity to desolated, forgotten and ruined buildings, as if Tremlett is doing a recherche du temps perdu. His drawings on brittle walls imply their own decay and show transitoriness in two ways: The formal hints on architecture that was intact in former times point to emptiness and loss, whereas the material, the pastel, fades away as time goes by. Connected with their carrier the wall drawings create a new unity of time, with Tremlett words: "These deserted surfaces became sculptures and drawings for another time."

The exhibition is accompanied by a catalogue with contributions by Martina Fuchs and Sabrina van der Ley amongst others.