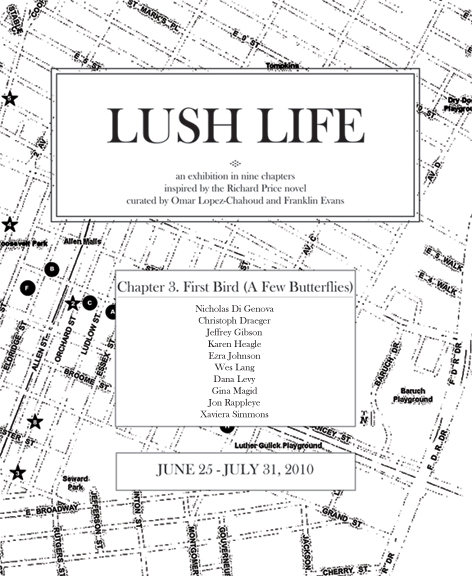 LUSH LIFE is an exhibition which takes place at nine Lower East Side (LES) galleries: Collette Blanchard Gallery, Eleven Rivington, Invisible-Exports, Lehmann Maupin, On Stellar Rays, Salon 94, Scaramouche, Sue Scott Gallery, and Y Gallery. LUSH LIFE adopts Richard Price’s 2008 novel to title and organize the exhibition. The novel is set in the contemporary LES and through a murder investigation exposes the dynamically changing community of the neighborhood, which despite its evolution retains a ghostly and vital link to its layered past. The deep and varied history of the LES now includes the LES galleries as new community members, and Price’s novel provides a potent vehicle for the consideration of community as voices compete for, ignore and occasionally share the same physical and conceptual space.

The galleries will host concurrent exhibitions with each exhibition reflecting the idea of one of the nine chapters in the book. The curators selected one artist from each gallery to participate in the exhibition and solicited from each of them one additional artist recommendation of an artist not from one of the nine participating galleries (nine total recommendations). The curators then supplemented this base group of eighteen artists to complete nine exhibitions, ranging in size from three to twelve artists. LUSH LIFE will be the present for what will become a living ghost to the future form into which the LES will inevitably morph.

The exhibition schedule varies slightly at each gallery with the earliest installation being June 17 and the latest closing being August 13. See gallery specific schedule below. There will be a collective opening of all participating galleries on Thursday, July 8th from 6 – 9 pm.