Recent work by Muresan ranges from drawings and animated films to photography, sculpture, and video. Taking as his point of departure the changes in post-Communist states after 1989, he addresses issues of cultural identity and collectivization processes. Throughout, he draws on art history, which leads him to idiosyncratic interpretations of the present. The exhibition presents over 15 works. Contemporary, with Gruppenbild 3 and Video Of The Month 3, n.b.k. continues two new series that present young international artists. 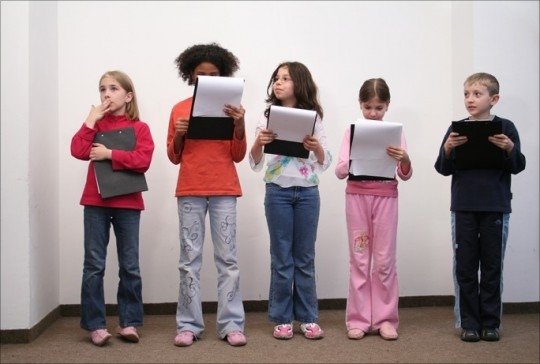 This show with over 15 works is Ciprian Mureșan’s first solo exhibition in an art institution context. His works have been displayed recently in the Centre Pompidou (Paris), the Renaissance Society (Chicago), and the New Museum (New York), as well as at the 17th Sydney Biennale. In 2009, he was one of the artists representing Romania at the 53rd Venice Biennale. Mureșan is a member of the editorial team of the art and culture journal IDEA arts+society, one of the most influential art journals in Eastern Europe. Recent work by Mureșan (born 1977 in Cluj) ranges from drawings and animated films to photography, sculpture, and video. Taking as his point of departure the changes in post-Communist states after 1989, he addresses issues of cultural identity and collectivization processes in his works. Throughout, he draws on art history, which leads him to idiosyncratic interpretations of the present.

In the two animated films Baptised (2009) and Pioneer (2010), two belief systems stand in opposition to each other: a screaming child is lowered into the baptismal font by a priest, whilst pioneer sniffs glue out of a plastic bag. The animations, made up of a series of individual drawing, take stock in cartoon-film style of the social changes in the New Europe. In the installation Incorrigible Believers (2009), made up of benches and a prayer stand, Mureșan transforms n.b.k. into a sacral space, yet one which is devoid of icons, a crucifix, or a priest. The sculpture The End of The Five-Year Plan (2004) is a reinterpretation of a work by Maurizio Cattelan, La Nona Ora (1999), which caused a scandal when it was first shown. However, instead of Pope John Paul II., here Patriarch Teoctist from the Romanian Orthodox Church is struck by a meteorite. Further works on display include the videos Rhinoceros (2006), Choose (2005), and the animated film 3D Rubliov (2004).

The social critique that enters into play in Mureșan’s works is a hallmark of the “Cluj-Generation,” yet the scope of this criticism extends far beyond the geopolitical situation in south-eastern Europe, without denying this context. This generation is involved in reshaping the role of contemporary art in the transcultural post-migrant society.

Further works of Ciprian Mureşan are on display in Berlin until July 31, 2010 at the gallery Plan B.

Book series “n.b.k. exhibitions”
On the occasion of the exhibition, a catalog will be published by Verlag der Buchhandlung Walther König, Cologne, with an essay by Hedwig Saxenhuber, an interview with Raluca Voinea, and a foreword by Marius Babias, 176 pages with color illustrations, German/English, 19.80 € (15.00 € reduced price).