The MoCP presents a retrospective of Baldessari's prints, spanning the four decades of artist's 'post-painting' period, 1970s to the present. This collection of prints is on loan from the Portland, Oregon-based collection of Jordan D. Schnitzer. Paula McCartney's densely wooded landscapes are enlivened, ironically, by brightly colored craft store songbirds. McCartney began the Bird Watching series in 2003, and released a book with the same title in 2010. 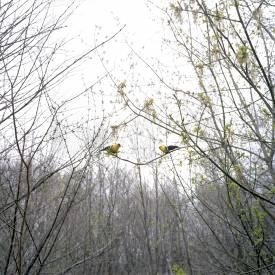 John Baldessari
A Print Retrospective from the Collections of Jordan D. Schnitzer and His Family Foundation

Chicago –– The Museum of Contemporary Photography (MoCP) is pleased to announce two exhibitions opening in July 2010. The MoCP is proud to present a retrospective of renowned artist John Baldessariʼs prints, spanning the four decades of Baldessariʼs “post-painting” period, 1970s to the present. This collection of prints is on loan from the Portland, Oregon-based collection of Jordan D. Schnitzer. "I first became interested in John Baldessariʼs work in the early 1990s and have been steadily acquiring it ever since," says Schnitzer. "Every time I see his work, I find myself excited, frustrated, often puzzled, but always appreciative of how the work challenges us to confront our preconceived ideas about language, image, and ultimately the world around us."

In 1970, Baldessari moved away from painting and began to work exclusively with photography and text to make his art more accessible. He was later identified with the Conceptual Art movement for his use of appropriated photographic images and text, to which he added colorful cutout shapes to create unique collage-based arrangements. He continued to employ photography in the 1980s, particularly movie stills, which he shaped, altered, framed, and rearranged without text in order to trigger new meanings.

Baldessari's interest in stretching art world parameters to include photographs coincided in the 1970s with a similar interest on the part of many progressive American print workshops to introduce printmaking processes as vehicles for contemporary expression. Techniques such as photo-etching, photo-offset lithography, and photogravure were already beginning to be used in the production of contemporary prints but were not being used to produce prints that featured photographic images as Baldessari had desired.

Baldessari once quipped that every artist should have a “cheap line,” in reference to the affordability of prints relative to other art forms available in the marketplace, but his comment belies the serious commitment that he has made to printmaking over four decades. The hundreds of prints he has made in a variety of media with presses and publishers in California, New York, and Europe underscore the high value that Baldessari places on printmaking as an artistic form. On view at MoCP is a selection of prints collected by Schnitzer from several of these print publishers.

"By challenging us through his art, John Baldessari prompts the viewer to take a new approach to seeing and understanding our world," Schnitzer says. "This remarkable achievement is what makes John Baldessari one of the most important artists of our time."

John Baldessari, (b. 1931, National City, California) has been teaching art and making art since the 1950s after receiving his BA and MA from San Diego State College (now San Diego State University). He taught at California Institute of the Arts from its founding in 1970 to 1988, and has taught at the University of California, Los Angeles, since 1996. He lives in Los Angeles and is often credited with helping to make that city an internationally recognized center of contemporary art. In 1997 Baldessari received the California Governorʼs Award for Lifetime Achievement in the Visual Arts, followed in 2005 by the Lifetime Achievement Award from Americans for the Arts. As part of the 53rd International Venice Biennale 2009, Baldessari was awarded the Golden Lion for Lifetime Achievement.

Paula McCartneyʼs densely wooded landscapes are enlivened, ironically, by brightly colored craft store songbirds. While the deceit is more obvious in some pictures than others, what bears noticing is how these faux fowl punctuate their environments both as formal elements carefully arranged amid the brush and branches, and as a curious construction that offers an idealized vision of nature undercut by the gentle satire of that ideal. McCartney began the Bird Watching series in 2003, and released a book with the same title co-published by Princeton Architectural Press and the MoCP in 2010.

ABOUT MOCP
The Museum of Contemporary Photography (MoCP), a resident organization of Columbia College Chicago, is the only museum in the Midwest with an exclusive commitment to the medium of photography. By presenting projects and exhibitions that embrace a wide range of contemporary aesthetics and technologies, the MoCP strives to communicate the value and significance of photographic images as expressions of human thought, imagination, and creativity.

ABOUT THE CURATORS
John Baldessari: A Print Retrospective from the Collections of Jordan D. Schnitzer and His Family Foundation is organized by the Fine Arts Museums of San Francisco and the Jordan Schnitzer Family Foundation. Schnitzer is a Portland, Oregon, native whose mother operated a local art gallery that focused on contemporary Northwest artists. He was fourteen years old when he bought his first painting, though today his principal passion is for contemporary art and prints. That initial acquisition started a lifelong pursuit to build a collection that could be shared with the public. During the last twenty years, Schnitzer has mounted over thirty exhibitions that have traveled to more than seventy-five museums. In addition to helping organize these exhibitions of work from his collection (loaned for free), he also helps fund educational programs that are tailored to individual community needs. Often these programs include underwriting that provides for guest artist visitations, hands-on workshops for children and families, transportation for grade school and high school students, and curriculum materials for teachers.

Karen Irvine (Paula McCartney) is the curator of the Museum of Contemporary Photography, Columbia College Chicago. She has organized numerous exhibitions including: Audible Imagery: Sound and Photography; Anthony Goicolea; Tracey Baran; Scott Fortino; Shirana Shahbazi: Goftare Nik/Good Words; Jason Salavon; Jin Lee; Paul Shambroom: Evidence of Democracy; Alec Soth: Sleeping by the Mississippi; The Furtive Gaze; and Camera/Action: Performance and Photography, among others. She received her MFA in photography from FAMU, Prague and her MA in art history from the University of Illinois at Chicago.