Krebber's 'Miami City Ballet' shall be the first stop in, or the downbeat of a series of 'new' exhibitions following a lengthy period of inactivity. Reena Spaulings is an artist based in New York. Often playing on the double-identity of art dealer and artist, Spaulings' work undermines professional distinctions while interrogating notions of individual authorship and artistic authenticity. 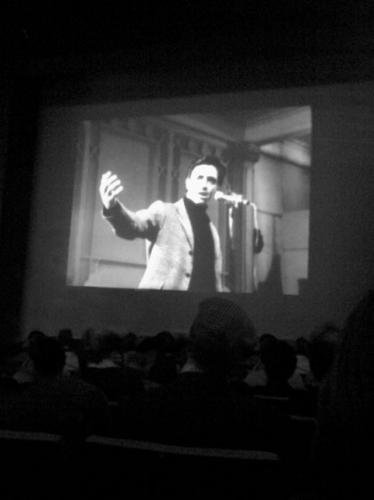 “Miami City Ballet” shall be the first stop in, or the downbeat of a series of “new” exhibitions following a lengthy period of inactivity. I took the photograph on the invitation card during a Douglas Crimp lecture. It shows the photograph being projected—of Edward Villella—the ballet dancer and later founder of the "MCB"—in the midst himself of holding a lecture. He shows his arm; looks at it and—according to Crimp-comments on it. That he is “beholding” his arm is un- knowable from my blurry photograph. More or less the same applies here, too.

Crimp’s lecture was held last autumn in Berlin at the Live Film! Jack Smith Festival. Andy Warhol’s "Camp" was also shown. Jack Smith was always late for performances and incapable of doing anything practical; after "Scotch Tape" and "Flaming Creatures" he had no finished product to reproduce or distribute; allegedly he would cut film during showings. At this point we put in the picture of Paul Swan, the actor and dancer who once held the title: "Most Beautiful Man in the World"; Swan who appears and dances beside a curtain behind which he disappears for a costume change or some other preparation but doesn’t reappear except perhaps when no one can believe it any more; Paul Swan who dances in Andy Warhol’s "Camp" as an old man in a style and with a conception of art that doesn’t work, or doesn’t work for the time, setting or public—with the possible exception of Jack Smith—who, at this point is maybe too tied up with his own situation; and photos of Edward Villella, who regularly collapses after the curtain comes down; photos of Villella’s arm from Andy Warhol’s Fotomaton clips.

And I would like also to add this picture: in a saloon in a mock Western town in the Bergisches Land, a theatrical performance where a good few of the actors are drunk. According to the script, he who is to be gunned down only makes his entry after he was shot—he had forgotten his cue, and the show had to go on.

I should like to perform in this exhibition that it doesn’t matter what I do, whether it is good or bad, or that it conforms however to whatever criteria—the fact that I call myself an artist is enough here. I will of course endeavor to regulate dosing so as not to drown out the pictures that I list.

Reena Spaulings is a fictional artist based in New York City. Some time in 2004, the she emerged from the daily operation of an art gallery of the same name (Reena Spaulings Fine Art). Often playing on the double-identity of art dealer and artist, Spaulings’ work undermines professional distinctions while interrogating notions of individual authorship and artistic authenticity.