Positions of Nude Art Photography. Camera Work presents a group exhibition mainly curated from its own collection, displaying more than 40 photographers and their perspectives on mostly female nude art. Selected classics are supplemented with, in some cases, never before exhibited contemporary works of Blaise Reutersward, Nadav Kander, or Ralph Mecke. 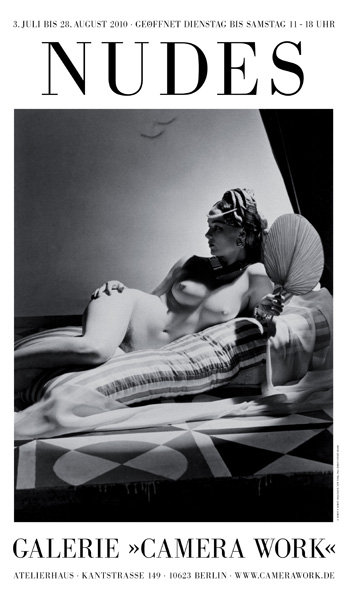 From July 3, 2010, until August 28, 2010 CAMERA WORK will present a group exhibition mainly curated from its own collection, displaying more than 40 photographers and their perspectives on mostly female nude art. Selected classics are supplemented with, in some cases, never before exhibited contemporary works of Blaise Reutersward, Nadav Kander, or Ralph Mecke.

The studio-photography of the Pictorialists was followed by trend-setting picture experiments in the 1920s. Artists like Man Ray, Andre' Kértesz, or Edward Weston began to render their studies of the body unfamiliar by means of using multiple exposure, solarization, collages, extreme perspectives, and techniques of light/dark contrast. These new methods of art were picked up during the post-war period and were continuously refined and advanced.

The almost abstract extreme close-ups of Ralph Gibson, the very sensual nude art of Manuel Álvarez Bravo, or the poetic perspectives of the body, drenched in blue light, by Kenro Izu serve as examples. Lucien Clergue, one of the most distinguished nude-art-photographers worldwide, captivates the viewer with his images of bare female bodies being caressed by shadow plays. Beside such photographs coming from “God’s notebook”, as Pablo Picasso once described his friend Clergue’s work, the pictures of the 1960s and 1970s predominantly have an increasingly sexual connotation, as is the case in the works of Robert Mapplethorpe or Helmut Newton.

In contemporary photo art, works of Thomas Ruff, Larry Sultan, or Nadav Kander, who each reflect on nakedness in different ways and who augment nude art photography with their innovative work exist side by side with erotic images of Guido Argentini or Russell James. While Ruff deprives the voyeuristic observer of pornographic images, the constant availability of which is guaranteed by the internet, by making them unfamiliar, Larry Sultan documents the solitude and melancholy on the fringes of the industry that tirelessly produces these images. With his pictures of baroque, haggard, and stressed female nude photographs, Kander, on the other hand, breaches the dictate of the traditional ideal of beauty. The persons portrayed are incorporated into mystic and gloomy spaces, and the unique atmosphere of these pictures immediately unfolds an eerie as well as archaic energy.