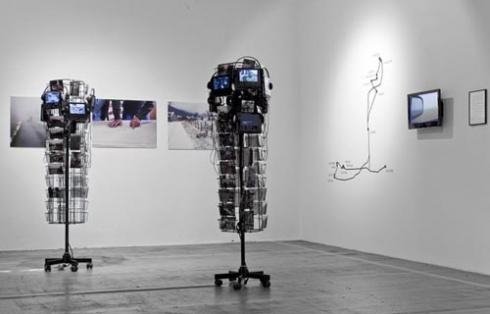 The exhibition Moving Worlds is part of the triennial event for contemporary creation in Luxembourg called Roundabout II - Triennale Jeune Creation, which was initiated in 2007 in the framework of Luxembourg and Greater Region, European Capital of Culture. The triennial's second edition aims to assess the current situation of contemporary art in Luxembourg and the Greater Region. Surveying the latest developments of the national and trans-national scene, it provides visitors with a unique opportunity to discover the work of a younger generation of emerging or established artists. Among the 150 artists who started to submit projects in September 2009, 33 were selected by the art historian and critic Didier Damiani, the curator of this event.

All of them come from Luxembourg and the Greater Region (Germany, Belgium and France), a geographical space that epitomises the fragmentation and mobility of societies in the age of globalisation. They have been invited to show their work at CarréRotondes in Luxembourg, and, besides the central exhibition venue, in several local and foreign institutions, the so-called 'satellites'. In an attempt to generate trans-national interaction, confrontation, encounters and exchange, this part of the exhibition is produced in collaboration with AICA Luxembourg, Centre Pompidou-Metz, B.P.S.22 in Charleroi and Saarbrücken Stadtgalerie.

Travel refers to journeys across landscapes of desire invested with affect, pacifist or libertarian ideals, dreamscapes, artificial paradises, exoticism and science-fiction. These 'moving' worlds are means of escape, repositories of inventive tactics and strategies based on the notion of migration and inner journeys.

The part of the exhibition devoted to Evolution deals with the effects of mechanical and technological progress, focusing specifically on new technologies that shape and alter the environment, thus contributing to the emergence of mutating, aggressive and confusing living spaces. The artists in this section demonstrate that machines can be vehicles of discovery capable of producing imaginary worlds and artificial journeys. Experimentation and interactivity give way to the spectator-actor.

Flux is concerned with notions of journey, physical displacement, speed, mobility and nomadism, but also pausing. Slow and fast movements evolve parallel to time and space at different speeds of circulation and flux, prompting hyper-journeys through multiple dimensions. The encounter of multicultural waves takes part in the flux, generating personal and collective narratives centred on the notion of the 'global citizen'.

Space-Time analyses the spatiotemporal relations that characterise today's seemingly boundless regions by concentrating on places of transit or non-spaces, experiential journeys in which the notions of distance and time no longer make sense and are divested of any existing order.

Revolution considers the emergence and rise of ideologies in terms of political and social change, surveying the instruments of power that initiate, regulate or thwart movement in our societies with the aim to impose standardisation and control of our identities and bodies. Mass media manipulation, the role and importance of images in society, imprisonment and death are further issues addressed in this section.