A comprehensive survey of surrealist art bring together masterpieces by Salvador Dali', Rene' Magritte, Pablo Picasso, Alberto Giacometti and Joan Miro'. The exhibition includes major loans from public and private collections and offers visitors the chance to see the Scottish National Gallery of Modern Art's world-famous collection of surrealist art in its entirety for the first time. 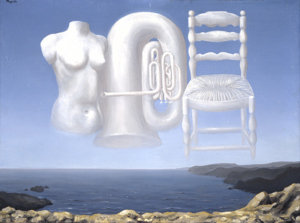 A comprehensive survey of surrealist art, bringing together masterpieces by Salvador Dalí, René Magritte, Pablo Picasso, Alberto Giacometti and Joan Miró, will be the major summer exhibition at the Dean Gallery in 2010. Another World, the centrepiece of the Scottish National Gallery of Modern Art's 50th anniversary celebrations, will offer a fascinating overview of one of the most important art movements of the twentieth century. The exhibition will include major loans from public and private collections and will offer visitors the chance to see the Scottish National Gallery of Modern Art's world-famous collection of surrealist art in its entirety for the first time.

The beginnings of Surrealism lie in Dada, a radical artistic and literary movement that was a direct reaction against the horrors of the First World War. Dada artists took an anti-establishment attitude and favoured the irrational and the absurd. In questioning art's status, Dadaists often pursued new or more unusual methods of producing art and their work assumed many forms, including outrageous performances, music, theatre, art, readings, nonsensical automatic poetry and the found object.

Tristan Tzara, Marcel Janco and Jean Arp were among the founders of the movement which developed early in 1916 in Zurich. The movement also took roots in New York, with Francis Picabia and Marcel Duchamp. A third main Dada centre developed in Paris, launching in March 1919 with the journal Litérature, edited by André Breton, Louis Aragon and Philippe Soupault. In 1918, a Dada movement launched in Germany by a group including George Grosz, John Heartfield and Hannah Höch. Berlin was at the very centre of a savage war, and this became manifest in the highly satirical and political nature of Berlin Dada.

When the war ended, Paris became a melting pot for artists and writers, and between 1919 and 1922, Picabia, Tzara, Arp, Man Ray, Duchamp and Ernst all moved to the city. After a period of infighting, Breton emerged as the leader, shifting Dada's focus away from its love of anarchy and nonsense, and towards more intellectual pursuits. By 1922, Breton was using Apollinaire's term ‘surrealist' and overseeing sessions involving hypnosis, automatic writing, and the exploration of dreams and the unconscious.

Breton's ideas were very much indebted to Sigmund Freud, who argued that subconscious urges underlie our everyday thoughts and actions. The Surrealists believed that the unconscious mind could speak for itself via a process of pure creativity which would reveal hidden truths normally locked away in the unconscious. A group of poets and writers (including Paul Eluard, Robert Desnos, Aragon and Soupault) and painters (most notably Miró, André Masson and Ernst) were interested in exploring such themes.

Having championed unpremeditated writing, Breton also favoured the automatic painting produced by Miró and Masson. In theory, this kind of technique suppressed rational thought and instead allowed the subconscious to take control. In practice, however, artists often mapped out their ideas in preliminary sketches and Masson acknowledged that it was much easier to make an automatic drawing than an automatic painting. Painting seemed to inevitably involve deliberation, choice and time.

Like de Chirico, Magritte undermines the illusions he creates by tampering with scale and perspective and by placing unrelated objects in unexpected settings. Such themes also appeared in the work of Paul Delvaux, Yves Tanguy and, to a certain extent, Max Ernst.

Important breakthroughs in technique expanded the repertoire of the surrealist artist. In the early 1920s, Ernst breathed new life into the technique of collage. Using engravings cut from ‘pulp' novels, he swapped them around, inserting birds, wild animals and rivers into bourgeois interiors. Ernst's approach caught on among the Surrealist group and proved popular with Breton, Eluard, and E.L.T. Messens.

Ernst was also responsible was popularising frottage (from the French word ‘frotter', meaning ‘to rub'), a technique which involved placing a sheet of paper over a rough surface such as wood and rubbing with a crayon or charcoal to transfer grainy patterns.

A related technique, grattage (from the French, meaning ‘to scrape or scratch'), involved scraping forms and textures into the wet surface of the paint. The effects produced by such techniques were central to Ernst's Surrealist ideas, allowing chance rather than the conscious mind to play an important role.

Although Surrealism had become a potent force in many countries by the 1930s, in Britain interest was only just beginning to stir. In the late 1920s and early 1930s, a small band of British artists, including Paul Nash, John Banting, Edward Wadsworth and John Armstrong, were responding to Continental Surrealism.

A significant figure in British Surrealism was Roland Penrose. He had exhibited widely himself in Paris and organised the International Surrealist Exhibition, held in London in 1936. Featuring around 400 works by artists from thirteen different countries, the show included all the leading names in the Surrealist group and provoked enormous controversy.

In Birmingham, a significant outpost of surrealist activity was established, thanks to Conroy Maddox, John and Robert Melville, Emmy Bridgwater, Oscar Mellor and Desmond Morris. Out of this group, Morris is the only artist still alive and painting, continuing to be a passionate defender of Surrealism as a living relevant force. As has often been said, Surrealism is not a style but a way of life.

In around 1929, the sculptor Alberto Giacometti became associated with the Surrealist group. He produced objects that were, he said, exact replicas of things that had appeared to his mind's eye, without enquiring what they were or what they meant. These works were often suggestive of cruelty, danger, sex and dreams. Breton saw one of these sculptures, bought it and asked the young sculptor to join the Surrealist group.

However, Surrealism did not always come naturally to sculptors as the traditional materials of bronze and marble did not lend themselves easily to automatic methods or to representing transitory dreams. It was through the use of the ‘object' or ‘found object' that sculpture featured significantly in the Surrealist repertoire.

Such works had their origin in Duchamp's Readymades, a term coined by the artist to describe existing objects taken from their original context and regarded as works of art. Many artists, including Dalí, Miró, Picasso, Breton and Man Ray, produced object sculptures, challenging conventional techniques and throwing aside artistic principles and prowess.