032c workshop is a site of production and discourse based in Berlin. The Report exhibition series articulates the ideas and positions that 032c currently engages with, as well as research for future projects and collaborations, and operates as site-specific satellite shows outside its Berlin base. 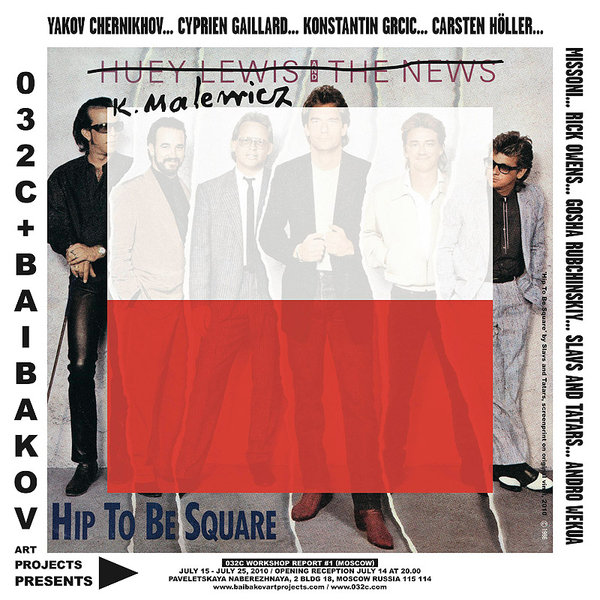 co-curated by Joerg Koch, founder and editor of 032c, and Maria Baibakova

BAIBAKOV art projects is pleased to announce its next exhibition, "032c WORKSHOP REPORT No. 1 (MOSCOW)," created in collaboration with the acclaimed Berlin-based magazine 032c.

At the core of the works on display is a shared effort to provoke the present by confronting the past. The work of the late Russian architect Yakov Chernikov is a bold statement of resistance to the Stalinist Classicism of his time—a nostalgia for Gothic forms in a epoch with none. Artist Carsten Höller has produced a tableware series for the nearly three-centuries-old porcelain manufacture Nymphenburg. Etched with the design of Georgy Krutikov's Flying City, Höller distorts the timeframe of an antique tradition with Russia's utopianism of the 1920s. As featured in the current issue of 032c, designer Rick Owens presents fabrics emblazoned with motifs of an East German monument—the source inspiration for his A/W 2011 collection—thereby branding his clothes with Real Socialist modernism.

The works will be displayed on seven, 032c-edition Diana tables by Konstantin Grcic, coated in metallic car paints and positioned on a carpet made from vibrant fabrics by the Italian fashion house Missoni for the exhibition.

032c workshop is a site of production and discourse based in Berlin. Housed on the third floor of architect Arno Brandlhuber's new building in Berlin-Mitte, it creates a multi-functional space of possibilities, which includes the office of the magazine, an 8-meter-long vitrine for exhibitions, and an ad hoc bar. The "Report" exhibition series articulates the ideas and positions that 032c currently engages with, as well as research for future projects and collaborations, and operates as site-specific satellite shows outside its Berlin base.

About 032c
032c is a biannual contemporary culture magazine at the intersections of art, culture, and fashion. It is distributed to 29 countries worldwide, and has been described by The New York Times as the "magazine that fuses art and architecture, literature, urban studies and fashion in ways that can make one forget how depressing a visit to the newsstands has become." For more information, please visit www.032c.com.

About BAIBAKOV art projects
BAIBAKOV art projects is a private, non-profit institution founded in 2008 by Maria Baibakova as a progressive platform for cultural production within Moscow. BAIBAKOV art projects is committed to the support and sustained development of contemporary art and to pioneering a new model of cultural patronage in Russia. Since its inception, BAIBAKOV art projects has produced some of Moscow's most talked about exhibitions and has collaborated with over sixty Russian and international artists including Olga Chernysheva, Wade Guyton, Paul Pfeiffer, Sterling Ruby, Luc Tuymans, Cyprien Gaillard, Thomas Hirschhorn and Kelley Walker.

Formerly based at the historic Red October Chocolate Factory, in May 2010 BAIBAKOV art projects opened its new venue in a former Soviet House of Culture at Paveletskaya Naberezhnaya 2, bldg 18. Constructed in 1978, the building exemplifies the tendencies towards grandeur and scale in the architecture of the late Soviet era. Located on the Moscow river, a 10 minute drive from the Kremlin, the site features 10,000 square feet of exhibition space. Its centerpiece is the White Hall, where a thirty-foot four ceiling enables large-scale installations. BAIBAKOV art projects also has facilities for public programs, a rooftop with 360º views of Moscow, and exterior spaces for public sculpture.