A group exhibition arriving from the Norwegian fjords, based around the participating artists' investigation into a forgotten moment in the life of seminal artist Kurt Schwitters. In focus here is the idea of stopping and starting, the notion that Schwitters was forced to rebuild his life (and the Merzbau) several times due to the political situation that led to his exile from Germany to Norway and subsequently to the UK. Visual arts, performance and sound based practices. 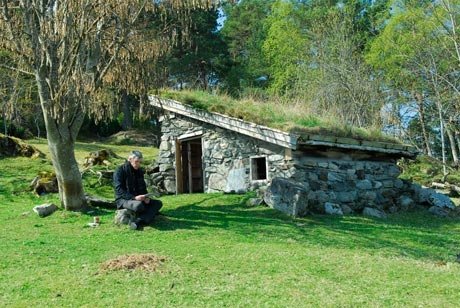 For the Summer Chisenhale Gallery hosts 27 Senses, an exhibition curated by Lina Dzuverovic and produced by Electra. 27 Senses is a group exhibition arriving at Chisenhale from the Norwegian fjords, based around the participating artists' investigation into a forgotten moment in the life of seminal artist Kurt Schwitters.

Emerging out of a research trip in 2007 to the Schwitters Hütte - a small Merzbau-like structure on the remote island of Hjertøya that the artist inhabited and transformed during his exile from Germany in the 1930s, the project developed in close dialogue with a unique site. Yet in its own subjective and heavily abstracted way, 27 Senses stretches beyond locality and speaks also of the very abandonment of a place. In focus here is the idea of stopping and starting, the notion that Schwitters was forced to rebuild his life (and the Merzbau) several times due to the political situation that led to his exile from Germany to Norway and subsequently to the UK. The geopolitical conditions the artist had to navigate continuously induced as well as restricted movement, making the relationship with place fluid and temporary.

Ideas of leaving behind and starting anew remain central to the new incarnation of 27 Senses, a move that coincides with Schwitters' own journey from Norway to the UK in the summer of 1940. This transition is one where the artists involved in the first chapter of the exhibition will continue their dialogue with Schwitters in ways that stretch beyond historical specificity to a more intuitive and personal engagement with both a specific place and movement away from locality. This includes a new commission by Norwegian artist Eline McGeorge, an installation which plays with the organic, multilayered and collage-like structure of the Schwitters' Hütte. Deliberately breaking up 90 degree angles and disrupting the angularity of the white cube, the installation re-introduces an enveloping environment, as the gallery itself becomes a form of Merzbau structure. Enveloping the viewer, the installation continues a dialogue with Schwitters' desire to collapse the barrier between art and life in an enveloping experience similar to that of a Wagnerian Gesamtkunstwerk, yet in a more quiet and subtle language. Visitors to McGeorge's Hütte in London will have a markedly different experience, and yet the work ties back, by extended links of kinship to Hjertøya and its crooked structure. This simultaneous conversation with movement, with taking a remnant and starting anew is something that links together the two shows, just as it, significantly, tied Schwitters' eclectic and nomadic practice together.

Schwitters' eclectic practice spanned across painting, immersive installation, performance, sound poetry, typography, collage and sculpture and has had a crucial, but often overlooked, influence on contemporary artistic and performative practices. 27 Senses takes the form of an exhibition and performance programme, investigating how certain ideas central to Schwitters' oeuvre are manifesting themselves today across the visual arts, performance and sound based practices.

The first stage of 27 Senses took place in the summer of 2007 in the form of a visit to the region by the selected artists. This research trip served as an initial on-site exploration of the presence of Schwitters in the area, and as a basis for the creation of site- specific works. 27 Senses at Chisenhale is the third stage of the project, following the exhibion at Kunstmuseet KUBE in 2009.

Electra is a London based contemporary art agency which specialises in curating, commissioning and producing ambitious cross-disciplinary projects by artists working across sound, moving image, performance and the visual arts.

27 Senses is part of CREATE10 http://www.createlondon.org

Kenneth Goldsmith's writing has been referred to as 'some of the most exhaustive and beautiful collage work yet produced in poetry' by Publishers Weekly. Goldsmith is the author of nine books of poetry including his American trilogy, The Weather (2005), Traffic (2007) and Sports (2008). He is also the founding editor of the online archive UbuWeb, and the editor of I'll Be Your Mirror: The Selected Andy Warhol Interviews, which inspired the opera 'Trans-Warhol' (Geneva, 2007). A documentary on his work, SUCKING ON WORDS: Kenneth Goldsmith premiered at the British Library in 2007. Goldsmith hosts a weekly radio show on New York City's WFMU and teaches writing at the University of Pennsylvania, where he is the senior editor of PennSound, an online poetry archive. He has been awarded the Anschutz Distinguished Fellow Professorship at Princeton University (2010) and his book Uncreative Writing is forthcoming from Columbia University Press.

Chisenhale Gallery
64 Chisenhale Road London E3 5QZ
Opening Times:
Wednesday - Sunday 1 – 6pm
During exhibitions, the gallery will be open on the first Thursday of each month until 9pm.
Admission free