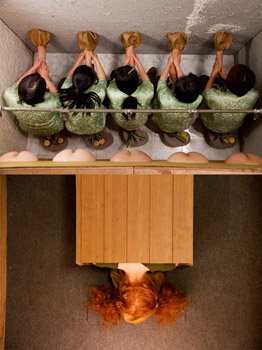 Rottenberg makes feminist art decades after feminism was legibly defined. She makes seriously political art that is preposterously funny. She documents reality, but spins it into narrative fiction. With Squeeze (2010), Rottenberg hones these signature tactics, creating a video installation that is both humorous and unsettling. New Work: Mika Rottenberg will be on view from July 8 through October 3, 2010 and is organized by SFMOMA Assistant Curator of Painting and Sculpture Alison Gass, who was recently cited by The New York Times as one of nine young museum curators in the U.S. to watch.

To create Squeeze, Rottenberg began by shooting documentary footage at a rubber plant in India and at a lettuce farm in Arizona. She then spliced it together with scenes of female workers in an absurdist makeup factory of her own imagining (actually a mechanized set constructed in the artist's studio). Rottenberg's video entwines these sites to chart the mass production of an "art object": a lumpy, subtly revolting cube made of rubber, decomposing lettuce, and blush. This "product" is a direct and self-reflexive riff on the prevailing value system of the contemporary art market, which positions artists and art objects as the hierarchical opposites of factory workers and their products. By setting her factory against the realities of mass production, Rottenberg broadens her focus beyond the art world. Significantly, in recognition of the fact that in current capitalist practice goods are often produced by a class of laborers who are at a far remove socially, racially, and geographically from the daily lives of consumers, Squeeze unites a broad spectrum of workers to enact the artist's satirical tale of art production. Thus, although Rottenberg trains her lens on the condition of a particular subset of workers—women—the piece reminds us that gender is but one classifier that determines our place in the mechanisms of global economics.

Rottenberg's uncommon and unsettling vision of art and commerce is mirrored in the uncommon and potentially disorienting museum experience she creates for viewers. To reach the video, one must travel a mazelike installation. This physical passage offers a through-the-rabbit-hole journey into an alternate art space in which impossible and uncanny events transpire, serving as an architectural symbol of the absurdist approach with which Rottenberg produces serious commentary on current social conditions.

To create her short films, she typically pursues an idea through drawings that give free rein to her imagination. Next she begins the careful casting process to find real people (instead of trained actors) who will interact with her mazelike, sculptural installation. She collaborates with a team of carpenters, engineers, and other assistants to build the environment or film set. Even before the construction is complete, she works with her characters in the space—almost as objects or motion studies—filming them and tailoring each compartment to fit their behaviours and unique corporeal features. Hours of footage are then edited down to produce the final video, which often incorporates moments when the actors forgot the camera was rolling.

Rottenberg's first major work, Tropical Breeze (2004), which was included in the 2005 Greater New York exhibition at P.S.1 Contemporary Art Center, depicted a female bodybuilder serving as a truck driver, sweating profusely on a hot day. She would lift her massive biceps to wipe her drenched bow with a Kleenex and then affix that Kleenex to a pulley system that transported the refuse to the rear of a truck where a seven-foot-tall woman extended an almost impossibly long leg to unhook the soaked tissues and then package them into boxes labeled "moist towelettes."

In other works, a woman's tears are factory-farmed as the special ingredient in bread (Dough, 2006), and red acrylic fingernails are transformed into maraschino cherries through a convoluted assembly-line process involving a trio of women on stationary bikes (Mary's Cherries, 2003).

Rottenberg's installation Cheese was a standout at the 2008 Whitney Biennial. Like her earlier works, the surreal and elaborate narrative of young women with creepily long (floor-length) hair working cooperatively to produce cheese on a farm was both funny and unsettling, "masculine" and "feminine," high tech and low-tech. Given the intense research, casting, construction, performing, filming, and editing necessary to complete each of her works, the projects typically take several years to come to fruition. Rottenberg's New Work show at SFMOMA will follow up the Whitney Biennial piece with a work that synthesizes the forms and themes apparent in her projects to date and push those concepts to a next level of practice.

ABOUT THE ARTIST
Rottenberg was born in 1976 in Argentina, raised in Israel, and currently lives and works in New York. She graduated with an M.F.A. from Columbia University in 2004. Her installations are in the collections of The Museum of Modern Art, New York; the Solomon R. Guggenheim Foundation, New York; and the Astrup Fearnley Museum of Modern Art, Oslo. She has had solo exhibitions at La Maison Rouge, Paris (2009); Nicole Klagsbrun Gallery, New York (2009, 2008, and 2006); and P.S.1 Contemporary Art Center, Queens, NY (2005), among others. Her work has been included in group exhibitions at the Guggenheim Museum, New York (2010); the Guggenheim Museum, Bilbao (2009); the Whitney Museum of American Art, New York (2008); the Tate Modern, London (2007); Serpentine Gallery, London (2006); and the Moscow Biennale (2007), to name just a few. Following her SFMOMA show, she will have upcoming solo exhibitions in fall 2010 at Mary Boone Gallery and Nicole Klagsbrun Gallery in New York and at De Appel Foundation in Amsterdam and Bonniers Konsthall in Stockholm (both in 2011).

ABOUT THE NEW WORK SERIES
From its inception in 1987, SFMOMA's New Work series was conceived as a means to feature the most innovative expressions of contemporary art. Artists such as Matthew Barney, Marilyn Minter, and Christopher Wool were given their first solo museum exhibitions through the program, establishing the series as an important vehicle for the advancement of new art forms. Over the ensuing decade, New Work featured artists such as Glenn Ligon, Kerry James Marshall, Tatsuo Miyajima, Doris Salcedo, Luc Tuymans, Kara Walker, and Andrea Zittel, among many others. After a four-year hiatus, SFMOMA reintroduced the New Work series in 2004, and has since showcased work by Edgar Arceneaux, Phil Collins, Rachel Harrison, Lucy McKenzie, Wangechi Mutu, Felix Schramm, Paul Sietsema, Mai-Thu Perret, Ranjani Shettar, and Vincent Fecteau.

The New Work series is organized by the San Francisco Museum of Modern Art and is generously supported by Collectors Forum, the founding patron of the series. Major funding is also provided by Martha and Bruce Atwater, the Mimi and Peter Haas Fund, and Robin Wright and Ian Reeves.

The exhibition New Topographics: Photographs of a Man-altered Landscape, held in 1975 at George Eastman House, signaled the emergence of a novel approach to landscape photography. The photographers of the New Topographics exhibition sought to show the rapidly increasing imprint that man was imparting on the landscape. A new version of this seminal exhibition reexamines more than 100 works from the 1975 show, as well as some 30 prints and books by other relevant artists to provide additional historical and contemporary context. This reconsideration demonstrates both the historical significance of these pictures and their continued relevance today.

Among the first museums in the Untied States to recognize photography as a legitimate art form, SFMOMA possesses one of the oldest and most distinguished photography collections in the world. The more than 12,000 images in the Museum's collection date from the advent of photography in the 1830s to the present day. Highlights include photographs by Ansel Adams, Imogen Cunningham, Walker Evans, Dorothea Lange, and Alfred Stieglitz. SFMOMA is also known for its rich holdings of photographs by European avant-garde artists of the 1920s and 1930s, with an emphasis on Constructivism and Surrealism, as well as a growing selection of "vernacular photography" — anonymous snapshots, documentary evidence, and other photographic images never intended to be viewed as art.