Artist Rooms collection comprises of 69 black-and-white photographs from across Diane Arbus's career, both her earliest work in 35mm and her characteristic square-format images, and ranging from her best-known portraits to rarely-seen images. Gert and Uwe Tobias' large woodcuts, gouache paintings, typewriter drawings and ceramic sculptures combine influences from traditional folk art and abstract art from the early 20th century. Their evoke a world that is hallucinatory and strange. 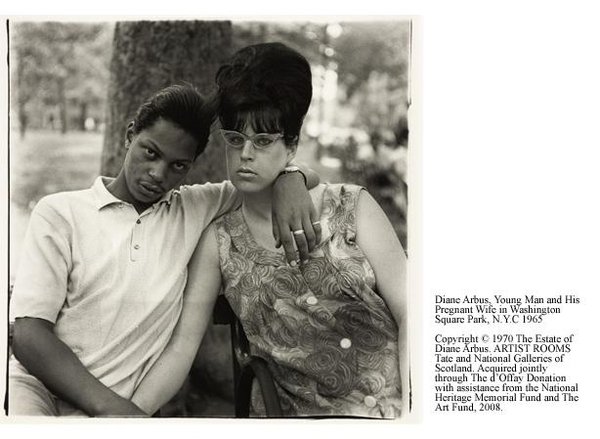 For our fourth exhibition season since opening in November last year we are presenting the first exhibition in the UK by German/Romanian artists Gert & Uwe Tobias and an outstanding collection of some 70 works by legendary American photographer Diane Arbus.

Diane Arbus is one of the most important photographers of the twentieth century, an influential figure whose compellingly honest style of photography paved the way for the work of contemporary photographers and artists.

ARTIST ROOMS comprises of 69 black-and-white photographs from across Arbus’s career, both her earliest work in 35mm and her characteristic square-format images, and ranging from her best-known portraits to rarely-seen images.

Gert and Uwe Tobias’ large woodcuts, gouache paintings, typewriter drawings and ceramic sculptures combine influences from traditional folk art and abstract art from the early 20th century. Their vividly coloured images, objects and environments evoke a world that is hallucinatory and strange. Twin brothers, Gert and Uwe grew up in Translyvania, then Germany.

Nottingham Contemporary is their first UK exhibition in a public gallery. The Romanian twin brothers create very large scale, vividly coloured and intricately realised woodcuts. This ancient technique with roots in both fine art and popular culture playfully unite allusions to the early 20th century European avant-garde – and the decorative and dark folk mythologies of their native country.

Gert and Uwe Tobias were born in Brasov, Romania, in 1973, in the Translyvanian region. Growing up in a closed society under the former Romanian dictator Nicolae Ceausescu, they were taught about the brutal historical defender of Romania - Vlad III “the Impaler”. When the family moved to Germany in 1985 they encountered Dracula, his pop-cultural scion, who has spawned at least 650 films since the 1920s. Returning to Romania as adults the brothers re-encountered the area’s traditional folklore – including handcrafts, costumes and ceremonies. Their shared visual language incorporates a cast of characters that are comic, animalistic, disturbing or bizarre.

The centrepiece of their exhibition is a 6 metre woodcut, made up of a number of different prints. The work is shown in the entire installation they have created, turning the primitive into the contemporary. In addition to the woodcuts, the exhibition includes watercolour paintings, drawings made with old-fashioned typewriters and handmade ceramic sculptures. Cabinets contain collages that allude to the Romanian tourist industry.

Both haunting and alluring, the exhibition plays with the viewer’s own image bank. Their masks, birds and skeletons remain cheerful and ghoulish enigmas.

Alongside the woodcuts their playful and elegant typewriter drawings reference the work of El Lissitzky and his revolutionary use of typographic elements as illustration. Lissitzky’s exhibition designs of the 1920s and 30s may also have helped to inspire the staging of their own exhibitions, where art works in several mediums are displayed in a dynamic painted environment.

They have created a set of hand coloured limited edition etchings, postcards and a poster for Nottingham Contemporary, available in our shop.