'New Topographics: Photographs of a Man-Altered Landscape'. Comprised of close to 150 photographs, it is a restaging of a historically significant exhibition held in 1975 at the George Eastman House in Rochester, New York. This reprisal brings together the work of all ten photographers included in the original New Topographics: Robert Adams, Lewis Baltz, Bernd and Hilla Becher, Joe Deal, Frank Gohlke... 'Picturing Modernity' explores the concept of place in American photography and features work made from the 19th century to the present. 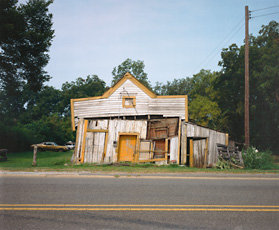 The San Francisco Museum of Modern Art (SFMOMA) is pleased to present New Topographics: Photographs of a Man-Altered Landscape, on view from July 17 to October 3, 2010. Comprised of close to 150 photographs, it is a restaging of a historically significant exhibition held in 1975 at the George Eastman House in Rochester, New York.

This reprisal brings together the work of all ten photographers included in the original New Topographics: Robert Adams, Lewis Baltz, Bernd and Hilla Becher, Joe Deal, Frank Gohlke, Nicholas Nixon, John Schott, Stephen Shore, and Henry Wessel. Widely considered one of the seminal exhibitions in the history of photography, New Topographics signaled the emergence of a radically new approach to landscape and demonstrated the influence of Conceptualism and Minimalism on photography in the 1970s.

New Topographics is significant to the history of photography primarily because it marked a dramatic shift in attitude towards landscape as a photographic subject. Unlike their predecessors, such as Ansel Adams or Minor White, the photographers featured in New Topographics did not use their work to express transcendent personal experiences of untrammeled nature. Rather, they used a more seemingly neutral approach to depict the ordinary landscapes that surround us, including aspects of the built environment that are often overlooked and considered eyesores: cheap motels, gas stations, tract homes, trailer parks, and parking lots. Included in the exhibition are: Buena Vista, Colorado (1973) by Henry Wessel; South Corner, Riccar America Company, 3184 Pullman, Costa Mesa (1974) from the series New Industrial Parks by Lewis Baltz; and Irrigation Canal, Albuquerque, New Mexico (1974) and Untitled View, (Boulder City) (1974) by Joe Deal, which all evince this radical reconceptualization of landscape.

Although they might lack conventional aesthetic hooks of expression, narrative, and beauty, these photographs are powerful aesthetic statements that reflect the complex and ambiguous relationship between humans and the environment—a relationship of particular importance here in the West. As open to the work of conceptual artists such as Ed Ruscha as they were to the history of their chosen medium, the photographers in New Topographics represent a crucial bridge between the once-insular photography world and the larger field of contemporary art. This restaging offers an opportunity to consider the photographs both in the context of the newly central role photography was playing in 1970s contemporary art as well as in relation to the period's prevailing cultural concerns, such as land use, national identity, environmentalism, and nostalgia.

Following the presentation at SFMOMA, the exhibition will travel to several international locales, including: Landesgalerie in Linz, Austria (November 10, 2010, through January 9, 2011); Die Photographische Sammlung Stiftung Kultur in Cologne, Germany (January 20 through March 28, 2011); The Netherlands Fotomuseum in Rotterdam, the Netherlands (June 25 through September 11, 2011); and Museum of Fine Arts in Bilbao, Spain (October 17, 2011 through January 8, 2012).

The exhibition is accompanied by a catalogue, New Topographics, published by Steidl, George Eastman House, and CCP. In the lead essay, Salvesen traces the prevailing cultural and aesthetic ideas that gave rise to the show, as well as the interconnections between the participants. Also featured is an essay by Nordström outlining the significance of New Topographics in Eastman House's history and its influence on photographic history as a whole.

The new presentation and international tour of New Topographics is made possible by a generous grant from the Terra Foundation for American Art.

Organized in conjunction with New Topographics: Photographs of a Man-Altered Landscape, this installation of the SFMOMA collection explores the concept of place in American photography and features work made from the 19th century to the present by Berenice Abbott, Walker Evans, Timothy O'Sullivan, Alfred Stieglitz, Joel Sternfeld, and many others. Highlights include an installation of sculptures and photographs by William Christenberry and a selection of photographs from Wright Morris's series Home Place to mark the centenary of the photographer's birth.