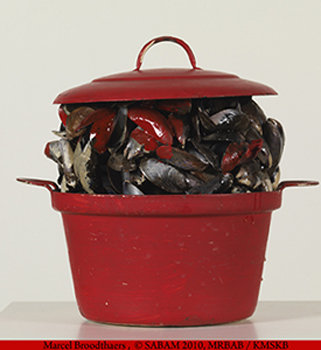 On the occasion of the hunderdth anniversary of the death of Charles Van der Stappen (1843-1910) the Royal Museums of Fine Arts of Belgium organize a documentary exhibition in order to present the multiple facets of this sculptor’s work. In 1875, when Van der Stappen, became well known he managed to link the study of the antiques and Italian Quattrocento with the dominant naturalism. He mainly owed his reputation to his monuments and ornamental façade sculptures. Produced in an eclectic style, those works have to be situated between Realism and Art Nouveau. As a teacher and director at the Brussels Academy of Fine Arts he gained reputation by his innovative approach of arts teaching. He developed, in co-operation with Constantin Meunier, the sculpture programme for the Botanic Garden of Brussels and he co-operated with Victor Horta in the domain of the Art Nouveau decorative arts. Due to his fondness for the contemporary literature his studio became a popular meeting point for artists from differents. We invite you to discover a selection of his drawings, preparatory sketches, projects, and archive documents.

The time has come to honour once again one of the greatest Belgian artists of the 20th century. Marcel Broodthaers, the king of heteroclite assemblies with the most unexpected aesthetical features, loved to create works with objects from everyday life: bricks, eggshells, sponges, plaster, newspapers, etc. This exhibition features works by Marcel Broodthaers from the collection of the Museum of Modern Art, the largest public collection of Broodthaers’ works. It is the very first time that they those works will be shown all together.simultaneously. This rich ensemble is completed by a number of pieces from other museums and private collections. More than enoughEnough good reasons to re-discover this visionary, anti-authority artist, whose works are still as topical as ever.

On the 28th of April the European Association of Public Banks (EAPB) announced the third edition of a joint initiative with the Royal Museums of Fine Arts of Belgium (RMFAB) entitled "Art and Finance in Europe", a sequence of exhibitions highlighting the relationship between Art and Finance, each year focusing on a specific era. The third "Art and Finance in Europe" exhibition will concentrate on the 17th century and is convened under the patronage of Androulla Vassiliou, the European Commissioner for Education, Culture, Multilingualism and Youth. Commissioner Vassiliou said: "Culture has the power to help shape our world and, as Commissioner, I want Europe to be at the forefront of this: to promote cultural diversity and intercultural dialogue in our increasingly diverse societies; to develop the role of culture in our international relations; and to promote culture as a catalyst for creativity, growth and jobs.” The exhibition Art and Finance in Europe-17th Century Masterworks in a new light is composed of some 20 major works from the permanent RMFAB collection. The exhibition comprises masterpieces by, amongst others, Daniel Seghers, Jan I Breughel, Jacob van Es, Frans II Francken, Rembrandt, Jan De Bisschop, Nicolaes Maes, Jan Lingelbach, Willem Van der Vliet, Rubens, Peter Bout, Jordaens. Leading art experts, Michel Draguet, Joost Vander Auwera and Hans J. Van Miegroet have lent their expertise in support of the exhibition

Royal Museum of Fine Arts of Belgium
Regentschapsstraat 3
From 10 am to 5 pm. Closed on mondays.