Organized in five sections, the exhibition features side-by-side comparisons of related prints, revealing how Munch changed a particular image over time, in terms of color, line, texture, and pictorial detail. His persistent experimentation and virtuosic handling of woodcut, lithography, and intaglio enabled him to vary not only the form but the meaning of individual impressions. Such alterations, which could be both subtle and radical, are also seen in his paintings and drawings. 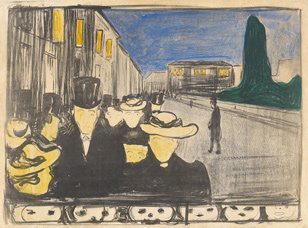 Haunting images of love, attraction, alienation, death, and other universal human experiences in the work of Norwegian artist Edvard Munch (1865–1944) will be presented in a fascinating exhibition of nearly 60 of his most important prints. On view at the National Gallery of Art, Washington, from July 31 through October 31, 2010, Edvard Munch: Master Prints examines the artist’s stylistic approach to each of these themes, a process that involved transforming ideas into an evocative motif and exploring that image through numerous variations over a lifetime.

"We are pleased to display exceedingly rare works by Munch, including stunning prints from the Epstein and Blitz Collections. We offer our profound thanks to the lenders who have made this exhibition possible," said Earl A. Powell III, director, National Gallery of Art. "The series brought together for this unique occasion will engage visitors as they experience Munch’s fascinating engagement with printmaking."

The Exhibition
Organized in five sections, the exhibition features side-by-side comparisons of related prints, revealing how Munch changed a particular image over time, in terms of color, line, texture, and pictorial detail. His persistent experimentation and virtuosic handling of woodcut, lithography, and intaglio enabled him to vary not only the form but the meaning of individual impressions. Such alterations, which could be both subtle and radical, are also seen in his paintings and drawings.

Building on new research, Master Prints is the first exhibition that considers the exact dating of different impressions of Munch’s fundamental images. A woodblock from 1898, for instance, might have been printed 1898 and again in 1907, 1915, and 1925, each time with some variation. The exhibition and catalogue will clarify how Munch’s artistic ideas evolved through multiple versions of a subject and how the artist reinterpreted powerful memories through new ideas and experiences.

The first section of the exhibition presents various impressions of The Kiss—first as an etching and later as a woodcut. This is a prime example of the development of an image over time, through a succession of new starts using different printmaking matrices (a "matrix" is an object such as an etching plate or a woodblock on which a design has been created and which is then impressed on a piece of paper to make a print).

The second section reveals a more radical reassembling of images, with Munch simplifying and abstracting compositional devices and adding color for dramatic effect. Scenes of starkly frontal figures in landscape settings, their eyes wide in fear or anxiety, progress from the only known impression of the lithograph Evening on Karl Johan Street (c. 1895) to the famous existential image of The Scream. Munch developed that image compositionally and stylistically into the two-color lithograph Anxiety, which he then reprised in a single woodblock hand inked to print a two-color version.

The third section considers examples of Munch making a print from a matrix but developing the image further after printing. Conceptually and practically, the simplest way Munch accomplished this is exemplified by two different versions of Ashes, where he took an impression of the two black-and-white lithographs and enhanced each with hand coloring.

The fourth section describes six examples in which Munch refined a scene or a theme, beginning with a single matrix and then altering that image through a variety of means, some quite bold and some less obvious: he redrew the original matrix, combined matrices, printed them in different sequences and colors, masked part of the matrix, changed the paper support, hand colored the impression. As a sophisticated printmaker, Munch creatively adapted or invented graphic techniques to produce some of his most complicated prints, including Vampire, Madonna, The Sick Child, Sin, Moonlight, and Girls on the Jetty.

The fifth and final section pulls together all of the artistic approaches seen earlier, with Munch varying his initial images over many decades through his masterful manipulation of printmaking media. In his color aquatint The Lonely One and color woodcuts The Lonely Ones, Toward the Forest, and Two Women on the Shore, Munch’s creative alterations of the basic scenes have a purely experimental character, exploring what could be drawn out of the image through continual variation.

Edvard Munch (1865–1944)
Edvard Munch was the most powerful and influential of the modern Norwegian artists. He produced more than 700 woodcuts, lithographs, and intaglio prints, constituting one of the major accomplishments in the graphic arts of the past century.

Personal events such as the deaths of his mother and sister, which occurred when he was a child, his own close brush with death at age 13, and his intense love affairs had a profound effect on his work. Munch translated many of his psychological experiences into visually condensed but potent and popular images, such as the delicate head of his sister seen in profile against the pillow of her deathbed in The Sick Child.

After studying in Oslo, Munch received an art scholarship that enabled him to visit Paris in 1885. During the next two decades he traveled throughout Europe, producing paintings that were heavily influenced by impressionism and symbolism but later developed an intensity that anticipated the later expressionist movement. By the 1890s Munch’s paintings were being widely exhibited.

Dire poverty in 1894 may have contributed to Munch’s decision to take up printmaking for the first time. In 1895 his friend Julius Meier-Graefe produced Munch’s first portfolio of eight etchings and drypoints, which revealed his immediate grasp of the medium. His distinctive working method lent itself naturally to printmaking, which accommodated both his personal psychological needs and his commercial interests.

In 1908 Munch settled in the town of Kragerø, Norway. Proceeds from the more extensive sale of his work enabled him to live comfortably beginning in 1909. Although he traveled occasionally, he spent his later years living a solitary existence on an estate in Ekely, outside Oslo. He continued to create works of art until the time of his death from pneumonia in 1944.

Prints, Drawings, and Illustrated Books at the National Gallery of Art

The National Gallery's collection of prints, drawings, and illustrated books consists of some 100,000 Western European and American works on paper and vellum dating from the 11th century to the present day. Because works on paper are highly susceptible to damage by overexposure to light, they can be exhibited only for short periods. For that reason, the Gallery maintains a schedule of changing exhibitions drawn from its own collection or borrowed from other institutions and private individuals. Drawings and prints not on view may be seen by appointment by calling (202) 842-6380.

A fully illustrated catalogue published by the National Gallery of Art and DelMonico Books, an imprint of Prestel Publishing, includes essays by Prelinger and Robison. The 168-page catalogue includes 131 color illustrations and will be available for purchase in the Gallery Shops in July in hardcover. To order, please visit our Web site at http://shop.nga.gov/; call (800) 697-9350 or (202) 842-6002; fax (202) 789-3047; or e-mail mailorder@nga.gov.

In recognition of the exhibition, the Embassy of Norway has organized a major festival of Norwegian music and culture—"Norway Comes to Washington"—with events scheduled between August 2010 and January 2011. Several of the festival events will take place at the National Gallery. All programs are offered free of charge with admission on a first-come, first-served basis.

In association with the Norwegian Film Institute, the Gallery will present two series of Norwegian films. During the month of September, Edith Carlmar: Norwegian Original will feature four films by the prolific director, while Figures in a Landscape: Norway and the Cinema will explore a range of important Norwegian films during the month of October. All films will be screened in the East Building Auditorium.

A number of concerts featuring Norwegian performers and compositions are also planned. As part of the Jazz in the Garden concert series, Norwegian jazz guitarist Bjorn Solli will perform on August 6, and the Carsten Boe Trio, a Django jazz band from Oslo, will perform on August 13. Concerts take place from 5:30 to 8:00 p.m. in the National Gallery of Art Sculpture Garden.