627K invites young people from the Prince's Trust and members of 60 Penfold Street to participate in a physical role-playing game that imagines the outbreak of a life threatening disease in a fictional state. Over a series of workshops, Van de Voort workd with the group to examine key themes such as Fear, Risk and Play. Workshops range from practical advice on the prevention of infection to historical analysis of pandemics, exploring historical and cultural responses to infectious disease. 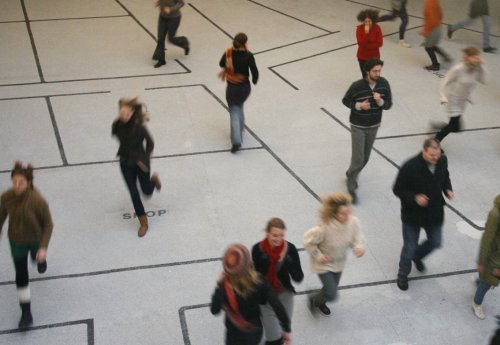 The Showroom presents 627K, a project by Dutch artist Mieke Van de Voort in collaboration with the Prince’s Trust and 60 Penfold Street.

627K invites young people from the Prince’s Trust (age 17-21) and members of 60 Penfold Street (age 50+) to participate in a physical role-playing game that imagines the outbreak of a life threatening disease in a fictional state. Thematic workshops, ranging from the sociological impact of infectious diseases to drama and improvisation techniques, led by specialists from the field, will prepare the group for play. The final game performance will take place in the Cockpit Theatre, located in the Church Street neighbourhood.

Over a series of workshops, Van de Voort will work with the group to examine key themes such as ‘Fear’, ‘Risk’ and ‘Play’. Workshops will range from practical advice on the prevention of infection to historical analysis of pandemics, exploring historical and cultural responses to infectious disease. ‘Play’ will focus on game play strategy, performance techniques and exercises referring to pandemic situations and infectious diseases as a context.

627K will provide a compelling forum where complex philosophical dilemmas such as free will and our relationship to the ‘other’, and biomedical knowledge are explored. To win the game and stay alive participants will need to work together as a team, utilising empathy, care and communication skills.

The final performance will be filmed and screened to the public at a special event at The Showroom on 29 July 2010.

Mieke Van de Voort (b. 1972) lives and works in Amsterdam. Her work often uses direct social and historical engagement with performance strategies. She has exhibited widely in the UK and abroad, including Driving out Discord (2009) a performance project taking place in the Ruyschstraat neighbourhood of Amsterdam, a neighbourhood known for high levels of deprivation; The Revolution That Didn't Happen (2005) restaged the failed attempt of Dutch socialists and communists to start a revolution in 1918 and General States (2008) staged at Casco, Office for Art, Design and Theory, in Utrecht.

Van de Voort will collaborate with a number of specialists to deliver the workshops including Dr. Carole Reeves, Outreach Historian for The Wellcome Trust Centre for the History of Medicine at UCL, Deena Blumenkrantz, scientist and PhD student at Imperial College specialising in Influenza, and artist Howard Matthew.

627K is the second in a trio of participation-based commissions taking place in 2010 under the umbrella title of Communal Knowledge. 627K is funded by the Mondriaan Foundation. Communal Knowledge is generously supported by the Paul Hamlyn Foundation, John Lyon’s Charity, and Westminster Arts. The Showroom is supported by Arts Council England and members of the gallery’s Supporters Scheme.

For further information please contact Natasha Tebbs on 020 7724 4300 or natasha@theshowroom.org