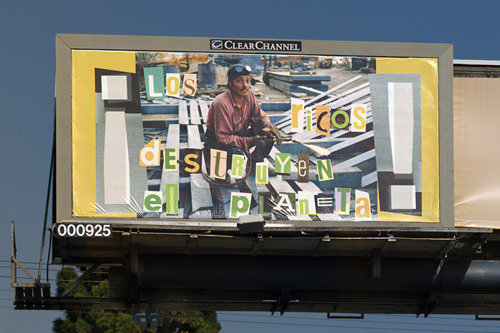 "The garage remains a garage. A simple, pragmatic and independent solution: straightforward garage aesthetics with an open-space garage top. The building complex itself is autonomous from Schindler’s original architecture (1939)."
Peter Noever, Director MAK Vienna / Art Director of the Garage Project

Fractional Systems. Garage Project II brings together well-known artists and architects from Vienna and Los Angeles — Raymond Pettibon, Franz Graf, Hernán Diáz Alonso, Elke Krystufek, and the next ENTERprise — each of whom will create works specifically for the Mackey Garages. Featuring a brand new second-floor project space dubbed the "Garage Top," the five newly rebuilt and enhanced garage units will be the setting for this exhibition of site-responsive interventions accompanied by a video program, specially selected for the occasion by artists John Baldessari of Los Angeles, and Heinrich Dunst and Peter Kogler of Vienna. Opening on June 24 with a press preview at 11 a.m. and a public reception from 7-9 p.m., both events will include the participating artists and exhibition curator Peter Noever, Director MAK Vienna.

The American domestic garage is a relatively neglected phenomenon. Its hinged doors regularly conceal important belongings, activities and rituals. For Fractional Systems, participants envisage differing uses for the garage spaces. Artist Raymond Pettibon of Los Angeles, known for his dark, pop culture-informed vision and wide- ranging output in film, performance, music, and especially, large format drawings, dealing mercilessly with contemporary culture ever since the late 1970s, plans to use his garage as a studio for the duration of the exhibition. Similarly, Viennese artist Franz Graf plans to produce a work in progress on-site, inspired by the garages and by Los Angeles. The deliberately conceptual oeuvre of Franz Graf breaks through the boundaries delineating both genres and media. The artist networks drawings, paintings, sculptures, installations and space concepts, as well as works involving text and sound, to form materialized thought formations.

Artist Elke Krystufek is based in Vienna, but currently spends much of her time in Egypt, taking language courses in Arabic and exploring the traces of Feminism in Muslim cultures. Much of her work has been in the form of (frequently nude) self- portraits, which serve as a projection surface for issues such as standards and norms imposed by the family or society, as well as her own views and those of others about sex and violence, power and identity. In her garage, Krystufek plans to exhibit a gold object representing the Arabic word for "feminism", a small and precious "tool" incorporated into the garage, generally the terrain of the masculine.

Xefirotarch, the Los Angeles office of Argentina-born architect Hernán Diáz Alonso, specializes in a biomorphic aesthetic. His drafting method combines futuristic applications of advanced computer technology with revolutionary space programs. Entitled, "The EYES of Laura Mars," Diáz Alonso’s garage project will feature glow-in- the-dark displays designed to exploit both the allures and fears that darkness inspires, with a special focus on mythological creatures of the night.

The next ENTERprise is the Vienna architecture studio of Marie-Therese Harnoncourt and Ernst J. Fuchs. In their garage, the next ENTERprise will present "The Tangibility of Looking," "associative fragments" of their work, ranging from experimental to built projects but all informed by their interest in the body’s role in the perception of architecture. Among the exhibited works will be an inflatable object designed for outdoors, "Trinkbrunnen" (drinking fountain), that provides a space to use for icing drinks, and an acoustic intervention incorporated in their garage unit.

The Garage Top interior provides a single uninterrupted space flooded with natural light. In the interest of simplicity, a soffit masks all infrastructure and service areas are discretely set at the far end of the space. Intended for a variety of uses in support of MAK Center programming and MAK Center Artists and Architects-in- Residence’ activities, the Garage Top is designed for flexibility.

Since 1994, the MAK Center for Art and Architecture has provided a platform for international exchange through projects and programs that challenge traditional disciplinary boundaries. Currently, the MAK Center operates from three different R.M. Schindler-designed residences: the landmark Schindler House in West Hollywood, the Fitzpatrick-Leland House in the Hollywood Hills, and the Mackey Apartments in the mid-Wilshire district. Built in 1939, the Pearl M. Mackey Apartments has in recent years provided live/work space for the MAK Center Artists and Architects in Residence, a competitive program that brings emerging international talent to Los Angeles.

Image: Allan Sekula. Billboard commissioned by the MAK Center for How Many Billboards? Art In Stead, 2010. Photograph by Gerard Smulevich

Press Preview – Thursday, June 24 11:00 a.m.
Opening on June 24 with a public reception from 7-9 p.m., both events will include the participating artists and exhibition curator Peter Noever, Director MAK Vienna.