Eastside | the journey. Artist's portraits thus convey a sense of dramatic irony, lost in a blinding whiteness or in a dark sea of crude oil, at once liquid and solid, conceptually unstable and temporary, dependent on their chemical sense of biological precariousness. 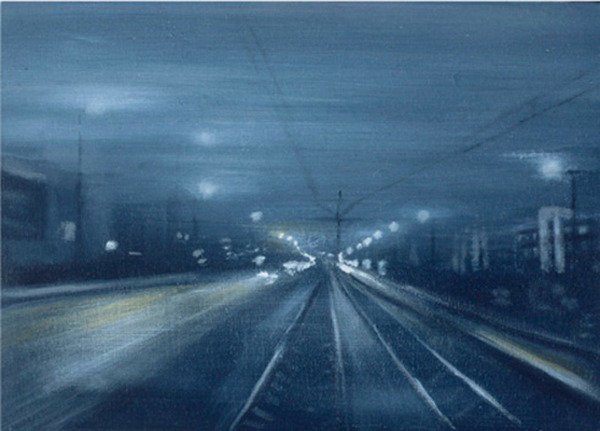 BIASA ArtSpace, will present the first solo show in Asia for the Italian artist Angelo Bellobono on Friday, July 30, 2010 at 6 pm.

Angelo has always placed humanity and the territory at the centre of his artistic research, stressing the difficult relations of belonging and identity, understood not simply in the socio-cultural sense but also in a biological sense. The mechanisms by which biochemistry translates into behaviours and emotions is the thread running through all his paintings, videos and performances, taking the emphasis away from the presumed spirituality animating human existence.

His portraits thus convey a sense of dramatic irony, lost in a blinding whiteness or in a dark sea of crude oil, at once liquid and solid, conceptually unstable and temporary, dependent on their chemical sense of biological precariousness. They reveal the constant efforts made to seek out an identity and a place in which to belong, a constant freezing and unfreezing of hidden or denied existences and of an ideal well-being. Bellobono gives form and consistency to a sampler of emotions experienced by all human beings; in his most recent works, which also probe the drive to immigrate, this investigation once again coiled painting with performance and video art.

Indonesia, located south of China and east of India is the heart of Southeast Asia, a crossroads of new economies. Eastside - the journey exhibition at the BIASA ArtSpace is a raw and direct analysis, at which it’s necessary to create a gap in an apparently logical system passively accepted. Once again the author invites us not to give up and force us to face the ambiguity of our “being human and biologically unresolved”.

The artist, who takes up different media, including painting, drawing, animation and performance, continues his journey of contemporary anthropologists in recent years, at which it has led him to carry out projects with a strong social impact. Thus antagonistic cultures reveal their glamorous and ephemeral side, or migrants reveal the effort to reposition their lives, or armies of plasticine face off each other across the icebergs obstinately and in decay to defend ephemeral borders. The journey is outlined through the works from previous projects together with new works conceived in Indonesia, which will be featured at the BIASA ArtSpace until September 15, 2010.