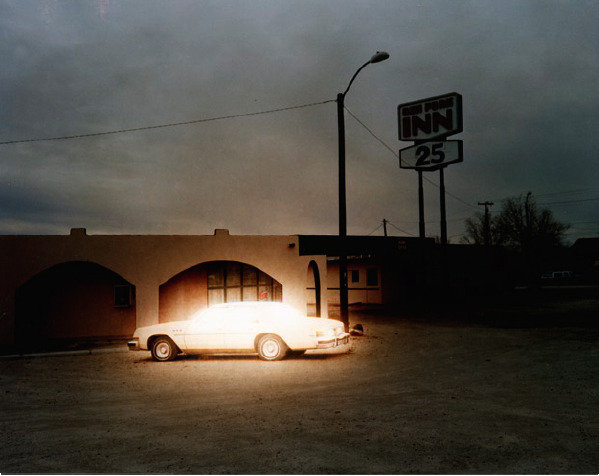 What happens on a journey through a country whose infinite production in media and art creates and celebrates its own myth? How can you escape from this maelstrom and discover new images behind the plywood facades?

The photo series „The Great Unreal“ by the Swiss artist duo Taiyo Onorato (born 1979 in Zurich) and Nico Krebs (born 1979 in Winterthur), deals precisely with these issues. After the two artists came in 2005 as fellows from the city of Zurich to New York, they have made several trips across the United States. Originated „on the road“ the photographs formulate the real and fictitious, documented and constructed, images and illusions as ideas that meet each other: We see a group of French fries that were assembled as a group of tourists on a cliff at the edge of the Grand Canyon. Street models made of cardboard are positioned in front of the horizon in relation to the camera, so that they look like real, endless highways. A row of old car tires falls down a hill, as would a galloping buffalo herd. In the tradition of Joel Sternfeld or Stephen Shore, Onorato & Krebs hit the road in order to play with the images and myths that shape our view of the ''American Way of Life''. Without resorting to digital manipulation, they have built their own unique worlds. And it was not unusual for the trail that led to the final image to first pass over the expanded flat pictorial space, then into the installation space. What remains is the certainty that each row of deserted terraced housing estates, each magnificent landscape panorama, every abandoned motel could ultimately be the perfect illusion – photography as a means to the sober documentation of reality is questioned self-referentially.

Taiyo Onorato & Nico Krebs studied photography at the Zurich University of the Arts. The common interest in the manipulation of reality, in the play with proportions and perspectives, led to the amalgamation of the artists as a duo in 2003. In the following years their works were shown at the Kunstmuseum Thun (2006), the Kunsthaus in Aarau (2009) and the Fotomuseum Winterthur (2009), just to mention a few. International recognition gained the duo solo exhibitions at the PS 1 MoMA (2006) and the Swiss Institute (2008) in New York and in the EX 3 Art Centre in Florence (2010).

„The Great Unreal“ in the gallery KUNSTAGENTEN is the first solo exhibition of the artists duo in Germany. For art forum Berlin 2010 (October 07–10, 2010) the gallery will show alongside photographs, installations and sculptural works by Onorato & Krebs.

The photo series „The Great Unreal“ is documented in an extensive Artist Book (Edition Patrick Frey, Zurich, 2009), which won several prizes including an award from the Swiss Federal Office for Culture in the competition „The Most Beautiful Swiss Books 2009“.