Over 90 works including loans from collections around the world 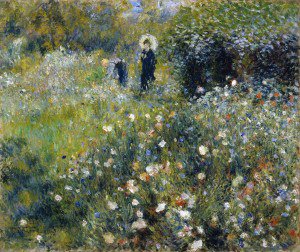 Exhibition organised by the National Galleries of Scotland and Museo Thyssen-Bornemisza, Madrid
Part of the Edinburgh Art Festival

The highlight of the 2010 summer season at the National Gallery Complex will be a ground-breaking exhibition on the subject of paintings of Impressionist Gardens. This major international exhibition of around 100 works is sponsored by BNY Mellon and is the first ever to be devoted to this fascinating subject, with spectacular loans from collections around the world. The famous names of Impressionism will be well represented, with fine examples by Monet, Pissarro, Renoir, Manet and Sisley. In addition, the exhibition will examine the continued significance of the impressionist garden to the generation of artists working immediately after the Impressionists, such as Cézanne and Pierre Bonnard. Lenders to Impressionist Gardens, which has been organised in partnership with the Museo Thyssen-Bornemisza in Madrid, will include the Metropolitan Museum of Art, New York; the National Gallery of Art, Washington; the Musée d'Orsay, Paris; the Museum of Fine Arts, Houston; the Staatsgalerie, Stuttgart; the Carlsberg Glyptotek, Copenhagen; Tate, London; and the Galleria Nazionale d'Arte Moderna e Contemporanea, Rome. This will be the only UK showing.

Gardens and flowers were a constant theme in impressionist painting and inspired these great artists to produce some of their most beautiful and memorable paintings. Claude Monet is perhaps the best known in this respect, for the garden he created at Giverny in rural Normandy, with its celebrated water lily ponds. All the Impressionists, however, featured gardens in their work, ranging from Sisley's ordered views of market gardens at Louveciennes to the wild profusion of Renoir's semi-cultivated garden, which adjoined his studio in Montmartre, as seen in his Woman with Parasol in a Garden (1875-6).

This exhibition will trace the origins of the impressionist garden, beginning with examples by the great school of early 19th-century flower painters at Lyons and looking at such important precursors as Delacroix and Corot, before moving on to the ambitious central section of the show which will feature many outstanding paintings by the Impressionists themselves. A final section will examine the 'spread' of the impressionist garden in the late 19th and early 20th century. European and American artists will feature in this section and will include Vincent van Gogh, Paul Gauguin, Gustav Klimt and John Singer Sargent.

The birth of Impressionism in France coincided with an explosion of enthusiasm for gardening. A massive programme of urban renewal had seen Paris transformed, under the Second Empire, into a city of gardens. Purpose-built nurseries and greenhouses supplied vast quantities of bedding plants to the city's public parks, which were filled with rare and exotic species of flowers and shrubs, imported from France's colonial possessions and beyond.

To the Impressionists, who drew their subject matter exclusively from modern life, the public spaces of Paris became a natural focus of their activities (highlights of the exhibition will include two of Monet's paintings of the Parc Monceau, as well as Pissarro's The Public Garden at Pontoise, (1874)). In a conscious attempt to regenerate French art, the Impressionists rejected the historical narratives, mythological scenes and religious themes of academic painting in favour of an art of the senses, concerned with capturing the flux and transience of experience. Working outdoors, they treated gardens as their 'studio', a perfect setting to observe figures in the open air, or to register the variations in colour, light and atmosphere produced by the ever-changing weather and passing seasons. For the Impressionists, the garden represented a complex and infinitely varied motif, which had become, for the first time in art history, a subject in its own right – an inspiration for art, rather than merely a useful backdrop or setting.

Hand-in-hand with the proliferation of public gardens, the 19th century saw an enormous growth of interest in gardening among the middle classes, who had left the crowded city centres to live in houses with gardens in the suburbs. By the 1860s, growing and enjoying flowers in a jardin d'agrément (decorative or leisure garden) had become a favourite pastime in France, and horticultural societies, exhibitions and publications abounded. Given the central importance of gardens their work it is hardly surprising that the Impressionists became enthusiastic adherents of this new cult.

In private gardens, and in particular the gardens which they planted and tended themselves (see Monet's The Artist's Garden in Argenteuil (A Corner of the Garden with Dahlias) (1873); and The Garden at Vétheuil (1881), Impressionists painted with great freedom to experiment with new techniques and approaches. This was not only true artistically but also horticulturally, with the layout and character of the garden being carefully devised or selected by the artist to suit his particular aesthetic needs. For Monet the distinction between gardening and painting would eventually dissolve, and he went so far as to claim that in establishing the garden at Giverny he had created his 'most beautiful work of art'.

For an art 'based on sensations', as Pissarro termed it, decorative flowers and shrubs, with their infinitely varied colours and scents, had an obvious appeal. However, a number of the Impressionists – Pissarro, Sisley and Morisot in particular – championed the beauty of the more humble, productive garden, drawing inspiration from small vegetable, market and orchard gardens in the villages and towns around Paris (see Pissarro's Kitchen Gardens at L'Hermitage, Pontoise (1874) and Sisley's The Fields of the same year).

These paintings also reveal an undercurrent of association, and even symbolism, which is often overlooked in relation to Impressionism, and which will be examined in Impressionist Gardens. Pissarro's paintings of peasant gardens were derided by some critics for their lowly subject matter, but significantly they are strongly suggestive of the democratic, Republican and utopian sympathies that often motivated the Impressionists. They also represent, in part, an unsentimental reflection upon the loss of a working relationship with the soil enjoyed by earlier generations, a fundamental shift in lifestyle which perhaps explains the explosion of interest in gardening in general.

The Impressionists deployed other powerfully resonant motifs in their garden imagery. With young children to bring up, artists such as Monet or Morisot had even greater cause to use their gardens as motifs in the 1870s and 80s (see Morisot's Child amongst the Hollyhocks (1881), and Monet's The Artist's House at Argenteuil (1873)). In addition, the theme of the family was highly topical in France in these years, following the turbulent events of the Franco-Prussian War and the Paris Commune. Families, mothers and children, who appear frequently in paintings of impressionist gardens, were strongly identified with an optimistic vision of the future, and were closely associated with gardens themselves, the cultivation of which was seen as a tangible means to 'turn swords into ploughshares'.

In some instances, meaning or association was triggered by the inclusion of plants or flowers that carried a specific symbolism. The curators of Impressionist Gardens have worked closely with colleagues at the Royal Botanic Garden Edinburgh on a careful exploration of the paintings in the show, identifying, where possible, the specific plants that are depicted. This invaluable and uniquely revealing research, which has been undertaken by David Mitchell, curator at RBGE, has also helped to demonstrate the high level of horticultural knowledge and expertise developed by some of the Impressionists.

From the early 1880s, Impressionism underwent substantial changes and in turn acted as a springboard for new styles and approaches by artists both in France and beyond. The final section of Impressionist Gardens will consider some of the ways these found expression in – and were given impetus by – garden motifs. Impressionism's increasing proximity to Symbolism will be illustrated by works such as Bonnard's The Large Garden (1895-6) and the The Fragrant Air (1894) by the Belgian artist Léon Frédéric; Van Gogh's response to Impressionism's expressive and decorative use of colour can be seen in his paintings Garden with Path (1888) and Undergrowth (1889); and the influence of Seurat's Neo-Impressionism (which emerged at the final Impressionist group exhibition in 1886) can be seen in the styles developed by Henri Martin and Theo Van Rysselberghe in Belgium, and Gustav Klimt in Austria (see Klimt's stunning Italian Garden Landscape (1913)). This section of the show will also re-unite three paintings included in Monet's hugely successful Waterscapes exhibition, held in Paris in 1909, in which his now-famous depictions of the water lily ponds at Giverny were first shown.

Impressionist Gardens is being curated by Michael Clarke, Director of the National Gallery of Scotland and organiser of many exhibitions on Impressionism, and Dr Clare Willsdon, Reader in History of Art at the University of Glasgow and a world expert on the subject. In addition to providing a dazzling array of world-class masterpieces, the exhibition will demonstrate how the Impressionists' passionate interest in gardening gave rise to some of their most memorable and significant paintings, and in doing so will offer a fascinating insight into a very significant chapter in the history of horticulture. It will therefore have a twin appeal, both to those who love great art and to the great army of gardening enthusiasts everywhere. The exhibition will be accompanied by a fully illustrated catalogue, priced £14.95.

Impressionist Gardens is generously sponsored by BNY Mellon. This is the first time that BNY Mellon, which recently sponsored The Real Van Gogh: The Artist and his Letters at the Royal Academy of Arts in London, has supported the National Galleries of Scotland.

'Edinburgh is one of our businesses' key centres and it is a special privilege to support this landmark project and the National Galleries of Scotland, whose championing of public access and education is very much in tune with the key principles that inform our own international programme of arts sponsorship,' said Woody Kerr, Vice-Chairman of Europe at BNY Mellon. 'I have no doubt that this remarkable exhibition will prove a huge success for both the National Galleries and the city of Edinburgh itself.'

Commenting on the sponsorship, John Leighton, Director-General of the National Galleries of Scotland, said, 'Impressionist Gardens will be the big festival exhibition at the National Galleries of Scotland this year, and a highlight of our summer season. This is the first time that this fascinating subject has been the focus of a major exhibition and we are delighted to have secured some spectacular loans from collections around the world. To organise an exhibition on this scale would have been almost impossible without the generous support we have received from BNY Mellon, and we are extremely grateful to them for helping us to stage this landmark show.'