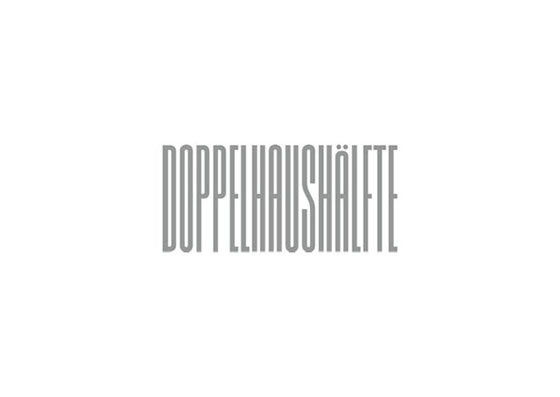 As in many of her preceding projects, Ayse Erkmen's show /Doppelhaushälfte /[Duplex House] deals with the spatial situation and the existing architecture of the exhibition venue. The artist describes her approach as follows: "By looking at the site, by being in the space. Through exploration and the attempt to comprehend a space. By looking outside the space, onto and under the space, by feeling its temperature." On the one hand the title, /Doppelhaushälfte/, suggests that two identical parts exist that combined form a whole, while on the other referring to a division of these two halves, which often possesses not only a spatial dimension.

In the entrance area of the gallery, the artist displays nine enamel sculptures in bright colors mounted next to each other on the wall, some quite closely. The abstractly shaped objects are reminiscent of earlier works by the artist, for example, the plane, colored sculptures cut out of compound aluminum, /Gemütliche Ecken/, that Ayse Erkmen leaned against street lights, street signs, and trees in public space on the occasion of the Steirische Herbst in Graz, Austria in 2009. These objects lead the viewer to discern in them the contours of certain things or consciously chosen details or negative forms. Yet if one tried to put the sculptures together like the pieces of a puzzle, they wouldn't fit.

In the main room of the gallery, things get more quite. A white dance floor with cut-out areas lies rolled-up diagonally in the space. This sculpture titled /sixtyfive percent/, 2010, seems to just fit into the exhibition space in regard to its length. The network of geometrical shapes cut into the dance floor material reproduces the ground plan of the gallery spaces on the first floor. Ayse Erkmen inserts the spatial structure of the upper half of the gallery into the lower one, filling one half of the venue with the other. In doing so, the artist further pursues the examination of floor plans and spatial dimensions of exhibition areas, as she has done in her spatial installations /Half of/, 1999 (Galerie Deux, Tokyo) or /Half of Each/, 2005 (Akademie der Künste Berlin).

The exhibition ends in the side room with the film /heart and círcles/, which Ayse Erkmen produced in 2009 for her show at the Centre d'art contemporain d'Ivry -- le Crédac. After the quiet, motionless, geometrical shapes in the preceding rooms, the artist now projects animated, abstract, colored circles and hearts that repeatedly overlap. These symbols imitate the different elements of the logo of the Centre d'art contemporain d'Ivry -- le Crédac, which the artist found when gathering information about the institution on its Web site.

For more than three decades, the internationally renowned artist Ayse Erkmen has been convincing audiences with her clear, unobtrusive oeuvre, prompting the viewer to look at objects, spaces, environments, and also social structures from a different perspective. Since 2008 the artist has exhibited at, among others, Hamburger Bahnhof, Berlin, K21, Düsseldorf, and Yapi Kredi Art Gallery, Istanbul. A new project by her will be open at Witte de With, Rotterdam, through September 2010.
Charlotte von Carmer