And How and Where and Who 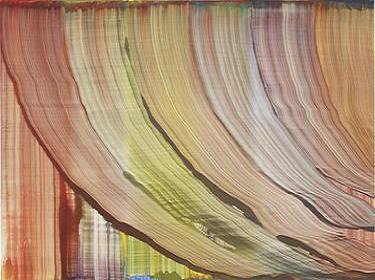 The French painter Bernard Frize (b. 1949 in Saint Mandé, lives and works in Paris and Berlin) is staging the first large retrospective of his work in German speaking countries for more than ten years. He will be presenting works from each of his periods of creativity, placing a special emphasis on his most recent output since 2005.

These works include large cycles, such as the so-called "grass paintings" from 2009, as well a several other works that represent the variety of different series made between 2001 and 2009. Photographs taken between 2001 and 2009, as well as a site-specific, large-format painting—which was produced especially for the exhibition and occupies a whole room of the museum, confronting the visitor like a barrier—reveal a hitherto unknown side of this diverse artist.

With his emphasis on the process itself, Bernard Frize has made a decisive contribution to the advancement of abstract painting since 1976. The process of production is presented so transparently in his paintings that the viewer can easily follow the germination of the idea from its inception via the rules employed by the artist while painting it, all the way to the specific final outcome. Although the process of production is reduced, intelligible, and virtually free of subjective statements on the artist's part, these works nevertheless exude a veritable sensuality and enigmatic quality. "The enjoyment of a painting takes place via the senses as well as the intellect." (Bernard Frize)

"And How and When and Who". The title of the Leverkusen exhibition itself, which has been taken from a poem by Rudyard Kipling, encapsulates Bernard Frize's tireless curiosity and inquisitiveness as an artist. His work fulfills the aim of creating the unforeseeable with every new painting, with each new group of works.