Alexander and Bonin exhibits at the ground floor a large scale works by Willie Doherty, Victor Grippo and Sylvia Plimack Mangold. In the 2nd floor 'Liliane', a portfolio of aquatints with etching by Sean Scully. This is the fourth in a series of portfolios co-published with the artist. 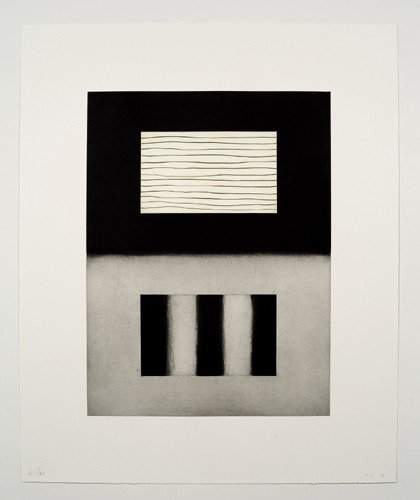 Willie Doherty’s triptych, Abandoned Interior I-III, 1997, a seminal work from this period, depicts domestic interiors as sites of social dissolution. Completed one year before the armistice in Northern Ireland, these large cibachromes suggest that the reverberations of conflict are reiterated in the architecture of everyday life. Born in 1959 in Derry, Doherty has remained close to the specifics of his immediate socio-political environment while generating a body of work with significant relevance to the world beyond his immediate community. In 2007. his video installations were the subject of a survey exhibition at Lenbachhaus, Münich and the Hamburger Kunstverein; in 2005 and 2007 Doherty’s work was exhibited at the Venice Biennale and in 2009 his video and photographic work was the subject of a one-person exhibition at the Dallas Museum of Art. In May of this year, Alexander and Bonin exhibited UNFINISHED and BURIED, his two most recent video works and in October the artist will premiere a new video installation at Manifesta 8 in Murcia, Spain.

Victor Grippos’s La comida del artista (Puerta amplia- Mesa estrecha)* a 1991 installation which takes the viewer through a generous half-open door to a narrow table set with seven white ceramic plates. Each plate holds an object (a golden egg, burnt bread, slices of eggplant) symbolizing conscience and consciousness, abundance and scarcity. Victor Grippo (1936-2002) lived and worked in Buenos Aires and his work was informed by his early training in chemistry, his commitment to material specificity and nuance as well as the repressive politics of Argentina in the 1970s. His work was widely exhibited during his lifetime and after his death in 2002 a number of works were included in Documenta 11 in Kassel. In 2004 it was the subject of a retrospective at Museo de Arte Latinoamericano de Buenos Aires (MALBA). Alexander and Bonin has shown Grippo’s installations, sculpture and drawings from 1965 through 2001 in one-person exhibitions in 2006 and 2009.

The Elm Tree (Winter), 1990-93 was painted outdoors over three successive winters. Painting from direct observation has been a hallmark of Sylvia Plimack Mangold’s work. Outdoor motifs change in large and small ways by the day and month and it is the structure of the tree on which her winter paintings focus. At the change of seasons, as the structure is obfuscated by, or denuded of foliage, a painting is set aside until the next year when similar conditions allow continued exploration. The passage of time implicit in her practice can be seen as a metaphor for painting. Plimack Mangold’s work has been the subject of more than thirty solo exhibitions including three museum surveys. Solitaire, a 2008 exhibition at the Wexner Center for the Arts juxtaposed paintings selected from her entire career with bodies of work by Lee Lozano and Joan Semmel. Last year, her etchings and drawings were shown alongside those of Lovis Corinth in Natural Sympathies at Alexander and Bonin.

Alexander and Bonin is pleased to announce the publication and exhibition of Liliane, a portfolio of aquatints with etching by Sean Scully. This is the fourth in a series of portfolios co-published with the artist.

The portfolio consists of eight images, each constructed from a 24 x 18 plate into which two 6 x 10 inch plates have been inset. Known for multi-panel, constructed paintings, the composition of Liliane recalls Scully’s “Passenger” works, in which the inset panels are fully contained.

A variety of mark-making is used for the inset panels which are printed in colors ranging from brilliant to subtle and contrast with the larger plates which are consistently dark on top and light on the bottom. Liliane was printed by Burnet Editions, New York in an edition of 40.

Previous exhibitions and projects with Alexander and Bonin include a 2003 exhibition of photographs from the monograph The Color of Time: The Photographs of Sean Scully and three previous print publications: Five Unions (1996), Seven Mirrors (1997), and Enter Six (1998).

For photographs or further information, please contact Kathryn Gile at 212/367-7474 or
kg@alexanderandbonin.com