This Russian collective, made up of artists, philosophers and writers, sees its diverse activities as a merging of political theory, art and activism. Formed in 2003, the group's ideas are rooted in their observations of post-perestroika Russia, and in principles of self-organisation and collectivism. At the ICA, Chto delat? presents an exhibition and associated season of activity which extends their identity as 'a self-organising platform for cultural workers'. 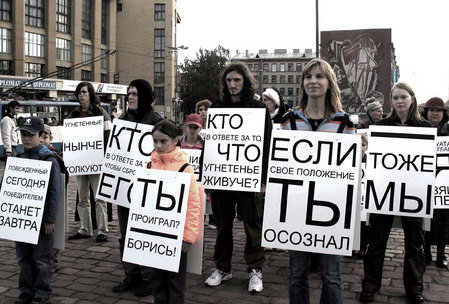 This Russian collective, made up of artists, philosophers and writers, sees its diverse activities as a merging of political theory, art and activism. Formed in 2003, the group’s ideas are rooted in their observations of post-perestroika Russia, and in principles of self-organisation and collectivism. Their work advances a leftist position on economic, social, and cultural agendas; they publish a regular newspaper, produce artwork in the form of videos, installations, public actions and radio programmes, and contribute regularly to conferences and publications.

At the ICA, Chto delat? presents an exhibition and associated season of activity which extends their identity as ‘a self-organising platform for cultural workers’. Revolving around the publication of a new issue of their newspaper, a gallery display centred on the group’s videos and a programme of talks, screenings and performances Chto delat? articulate the potential for constituting new forms of living and learning.

In 2009 Chto delat? and Russian Socialist group Vpered initiated a series of 48 hour communal living seminars aimed at rethinking the conventional approach to discussions and conferences. For two days the ICA will be the host for the most recent incarnation of this event, which aims to create an intensity of relations between its participants; through sleeping, eating, entertaining, performing and discussing together.

The event will bring together invited cultural workers who are part of collectives from around Europe. his 'commune' will use the question 'What struggles do we have in common?' as a starting point to focus on the problem of how to combine theory and art with the militant political life.

Using the model of Bertolt Brecht's 'learning plays', the participant's discussions over the course of the two-day seminar will lead to a public performance of a play on the evening of Friday 10 September. Led by artist group Tsaplya and Gluklya (Factory of Found Clothes) and choreographer Nina Gasteva, this play will fuse the issues tackled by the 'commune' with expressive theatrical presentation.

Learning play “What Struggles Do We Have In Common?”
10 September 2010
Free, booking required

Presented by Factory of Found Clothes, Nina Gasteva, Chto delat? and the participants of the 48 Hour Communal Life Seminar?

The title-question of the seminar and the play “What struggles do we have in common?” addresses the urgency of reconsidering the cultural field as a battle ground – where different forces of politics, aesthetics and ideology confront each other. The play concentrates on the recurrent conflict between artists and intellectuals who have chosen, out of a perceived necessity, to carry on their work within the framework of the institutional landscape, and activists who consider this position a betrayal of a political agenda that serves only to further the particular ‘brand’ a collective carries, detached from any political relevance. The play is an attempt to stage this conflict publicly and invite a local audience to engage with potential resolutions.

The Factory of Found Clothes (FCC) are Natalya Pershina-Yakimanskaya and Olga Egorova, respectively known as Gluklya and Tsaplya, both members of the collective Chto delat?. Founded in 1995 in St Petersburg, FCC are a well known feminist collective who often use participatory research methods to develop an operational logic of ‘fragility’ as subjectively antagonistic to that which is the state of things – be that the repressive social and political climate of Russia or the reflexive futilities of international art scenes. At the ICA, they are working with choreographer Nina Gasteva and Chto delat? to present a participatory public performance of a learning play that has been worked on collectively by all participants in the 48 Hour Communal Life Seminar.

During the course of the Chto delat? exhibition the ICA cinema hosts a weekly screening event addressing filmmaking which exists at the intersection between art, and social and political activism. Focussing on both historical examples, and the work of leading international contemporary practitioners, this programme uses key short and feature films as the starting point for discussions between the filmmakers themselves, and other invited speakers.

ICA - Institute of Contemporary Arts
The Mall, London
The galleries are open during exhibitions 12 noon–7pm, except Thursday 12noon–9pm
free admission