On show Leiderman continues his ongoing elaboration of what he calls 'Geopoetics'. Drawing inspiration from current themes and political situations, geopoetics seeks to transform those themes and situations into abstractions, thereby testing their flexibility, privileging their unexplainable character, and thus restoring to them some measure of irreducible, if ironic dignity. 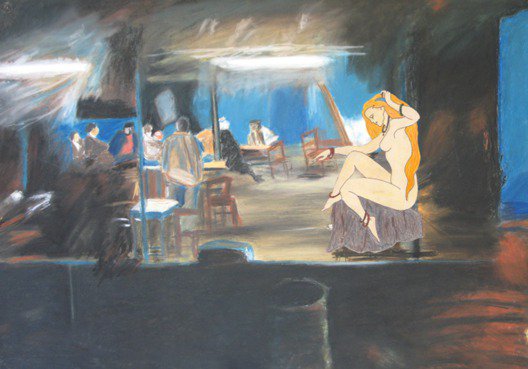 Yuri Leiderman is a zealot. A kind of unorthodox, conceptual manic. Where the majority of his peers might be happy to establish their modes of conceptual logic and lucidly state their business, Leiderman drives his to its breaking point, and then some. Indeed, his highly subjective and idiosyncratic universe, allegories go way beyond the call of allegorical duty, systems are deliberately overwrought and therefore unsustainable, taxonomies are meticulously predicated on fits of inspired logic, and failure inevitably flourishes in disarming and rarefied abundance.

Consider for instance his determination to teach European history to his cat via cat toy teaching aids, or growing Kefir grains, conceiving a system to individually name them and releasing them into zero gravity with the help of a space training program air plane. Never mind lecturing in a gallery throughout the course of the 1994 world cup about why either Brazil, Germany or Italy should win.

For his second show at Galerija Gregor Podnar in Berlin, which is entitled "Visions of Hans Castorp", and named after the eponymous protagonist of Thomas Mann's Magic Mountain, Leiderman continues his ongoing elaboration of what he calls "Geopoetics." Drawing inspiration from current themes and political situations, geopoetics seeks to transform those themes and situations into abstractions, thereby testing their flexibility, privileging their unexplainable character, and thus restoring to them some measure of irreducible, if ironic dignity.

The starting point for "Visions of Hans Castorp" is an installation from 1992 entitled "The Very Dubious." It belongs to a moment in Leiderman's career when he was particularly interested in the notion of classical illustration, as in the illustrating of novels, and to what degree that was possible. Responding to a widespread craze over The Magic Mountain in Moscow in the late Soviet era of the 1980s, the artist attempted to illustrate a spiritual séance, which takes place in the book. Thus he depicted the participants of the seance as round, white cylinders of plaster, which bear the names of those they would represent, and organized them around a table, itself is surrounded by photos of living animals and dead bodies, meant to symbolize a space between life and death, and the inhuman and human.

The extent to which this subjective illustration is successful (or deliberately unsuccessful) can be compared to the geopoetic cogency of a series of works which constitute the second part of the show, and which are meant to be Hans Castorp's visionary hallucinations of our current moment. Combining political pronouncement with superfluous decoration, the content of Castorp's visions, however, seems to be curiously preoccupied with the former Soviet Union.

That Castorp should hallucinate Leiderman himself holding a banner that says in Russian, "Down with Putin Oppressor", a depiction of Ukrainian parliament or, a reference to the Belarus president Alexander Lukashenko, seems to be most agreeably farfetched, in the best Yuri Leiderman fashion. Indeed, in Leiderman's universe point A might not have much to do with point B, but he'll always find a way to get there and make it all add up, even if he has to use a form ad hoc logic, whose fabulousness ultimately implicates the soundness of the most rigorous forms of logic.

Image: Detail of the installation The Best and the Very Dubious, 1992/2010