Nabatt: a sense of being

The exhibition features over 130 works by 23 Saudi artists, and involve visual arts, music and literature. The diversity of media creates an intriguing crossover that illustrates the vivid cultural engagement within the Saudi art scene. The artists focus their work on the issue of glocalisation. The word Nabatt has different meanings, two of them are "extracting water from the ground" and "to obtain the sense of one word from another word". 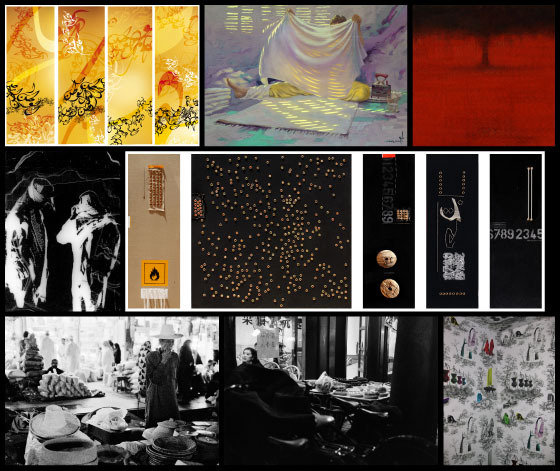 Poetry by Abdullatif A. Al-Shaikh
Music Produced by Ahmed Al-Mayman

Saudi Arabian Pavilion at 2010 Shanghai World Expo is delighted to announce NABATT: a sense of being, an exhibition of contemporary art from Saudi Arabia.

The exhibition is co-curated by Lulwah Al-Homoud and JW Stella and organised by Cube Arts in collaboration with Shanghai Duolun Museum of Modern Art, premiering Saturday 11th September through 31st October 2010. There will be a Grand Opening on Friday 10th September, 6 – 8 pm.

NABATT: a sense of being features over 130 works by 23 Saudi Arabian artists. These works involve visual arts, music and literature, each of them being a catalyst speeding up the creative movement among Saudi artists. The diversity of media creates an intriguing crossover that illustrates the vivid cultural engagement within the Saudi art scene. The artists focus their work on the issue of glocalisation, a word that describes the continuous reciprocal reshaping that the local and the global wield on one another, something which has become a central issue of art and culture in the 21st century.

The exhibition is sponsored by The Saudi Arabian Pavilion, King Abdulaziz Center for World Culture at Saudi Aramco.

"The King Abdulaziz Centre for World Culture is pleased to support the Nabatt exhibition as an example of contemporary arts within the Kingdom of Saudi Arabia. The true wealth of Saudi Arabia is the limitless talent of its young population, who are dynamic, ambitious and possess incredible artistic and creative potential". Fuad Al-Therman, Director

The word Nabatt has different meanings. Two of them, "extracting water from the ground" and "to obtain the sense of one word from another word", clearly establish its folkloric and literary values. However, the origin of the word is still debated among scholars. A theory is that it originated from the Nabateans who were the first ancestors of Arabs. Another theory sees it deriving from the 16th Century Nabatti poetry, which is considered the richest form of popular Arabic literature.

Also known as "the people's poetry", Nabatti Poetry deals with all the themes dear to Arabic classical poetry but is free from any formality and constraint. Nabatti poetry's characteristic traits are the simple style and the combination of poetic artistry with direct communication. It allowed the inhabitants of the Arabian Peninsula to express their creativity and spontaneity, to discuss their sense of place, identity and existence within diverse racial and complex societies, uniting and establishing a nation with Makkah as its centre. In certain eras, this poetry was the only record of historical events. It is a medium that consolidated the Saudi aesthetic genealogy and still practiced nowadays as part of the artistic exploration of contemporary social themes.

The exhibition Nabatt presents different forms of art from Saudi Arabia. It is an interaction between visual art, literature and music created in response to one another, showing the creativity of the artists as their 'sense of being'.

Lulwah Al-Homoud is an independent curator, artist, art consultant and a branding expert based in London with extensive international experience of advising high profile individuals, organisations, museums and galleries. She organised cultural events since 1999, curated art exhibitions in London since 2001, Worked on an educational project with the British Museum 2006 and recently co-curated the Saudi Arabian contemporary art exhibition titled ‘Edge of Arabia’ Brunei Gallery, SOAS, London, 2008.

JW Stella is an independent curator, art consultant, lecturer, and cultural mediator based in London and Seoul. She is involved in an advisory capacity with a cross-cultural engagement between the nations. She curated and project managed high-profile international contemporary art exhibitions, such as 'SU:MBISORI, Inaugural International Art Exhibition for Jeju Museum of Art (Korea, 2009) and 'Fantasy Studio’-a collateral project with Liverpool Biennale 2008, (A Foundation, Liverpool, UK).

There will be various educational programs running throughout the exhibition period

'NABATT: a sense of being’ is organised by 'Cube Arts’, London in collaboration with 'Shanghai Duolun Museum of Modern Art’, China

The exhibition is sponsored by The Saudi Arabian Pavilion, King Abdulaziz Center for World Culture at Saudi Aramco and Huawei.
Supported by The Ministry of Culture and Information, KSA