In his photographics works Stefan Burger has a way of removing all the camouflage to reveal what lies underneath, things half finished, the abandoned and the empty. In 1977 Larry Sultan and Mike Mandel combed through thousands of photographs in the archives of companies for the project Evidence. From its earliest beginnings, photographs by Larry Sultan and Mike Mandel captured how, where and under what conditions people work. The exhibition 'Arbeit / Labour' includes a selection of works by Richard Avedon, Joachim Brohm, Raphael Dallaporta/Ondine Millot, Guido Guidi... 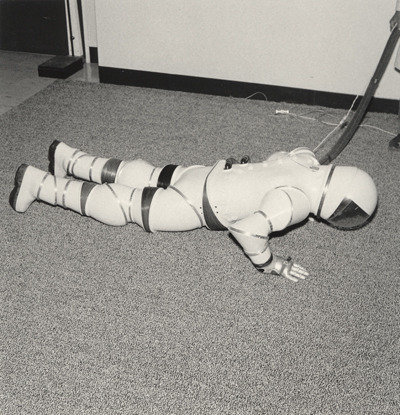 We have a penchant for cladding, disguising, draping, varnishing and covering up – the crooked wall, the aging face, the leaking oil rig, the dented bodywork. We have a penchant for fixing the world around us to hide the way it came about, the way it evolved or the way it works, so that it can just sit before us to be appreciated and admired like a perfect, glistening box. Actions disappear in the outcome, cracks, defects and mistakes are concealed, spaces edited out. We like the outcome, the performance, the action, the event and the glamour – and we get rid of what’s in between, what’s absent, dull, the anticlimax, we wipe away everything we don’t want, tossing it into the real or virtual trashcan.

Stefan Burger is well aware of this display of perfection and presence (especially in photography with its ever so homogeneous surfaces, its brilliant appearance and its mass medial dissemination) and he scratches the surface, walking into the rear courtyard and coming across chaotic construction. He has a way of removing all the camouflage to reveal what lies underneath, things half finished, stuttering processes, the before and the after, the abandoned and the empty. It is not the blossoming flower pot that interests him but the empty planter, not the latest fall fashions but the sales, not the great performance but the abandoned stage after the lights have gone down. He exposes mechanisms: mechanisms of perception, production and operation. He also looks at the modus operandi of making art, producing pictures, and showing and exhibiting works.

We thank George Foundation, the Swiss Federal Office of Culture and Hulda and Gustav Zumsteg Foundation for their generous support of the catalogue and the exhibition. Additional support by Cassinelli-Vogel-Stiftung, Ernst Göhner Stiftung and Hans-Eggenberger-Stiftung.

In 1977 Larry Sultan (1946-2009) and Mike Mandel (*1950) combed through thousands of photographs in the archives of the Bechtel Corporation, the Beverly Hills Police Department, the Jet Propulsion Laboratories, the U.S. Departments of the Interior, the Stanford Research Institute and a few dozen other companies, administrations and educational institutions. They were looking for photographs taken specifically for maximum objectivity. They ended up selecting a series of photographs which they printed with great care in a limited edition, as if they were art prints, with the simple title Evidence on the cover.

The idea behind the project was clear: they wanted to show purely documentary photographs, originally taken only in order to provide evidence, and then, through selection and presentation, disorient viewers of the book, making them question the seemingly obvious visual evidence. In the New York Times the pictures were described as "a strange, stark, sometimes disturbing vision of a late-industrial world." Today the Evidence project is considered a milestone of both conceptual and appropriation art. It is an early example of artistically subverting the notion of the original and of authorship. Moreover, by omitting all textual explanation, the project directs attention to the structure and poetry of the images. It is up to us as viewers to imbue these wondrous and curious artefacts, these context-free pictures, with meaning.

Mike Mandel and Larry Sultan worked together on various projects in the 1970s. Evidence is the most famous of their collaborative ventures.

An exhibition from the Collection of the Fotomuseum Winterthur (Gift of Michael Ringier).

Set 7 from the Collection and Archive of the Fotomuseum Winterthur

We each relate to work in our own personal way. We may be employed or self employed; we may have just entered the workforce and have specific goals or we may be enjoying well-earned retirement.

Working to earn a living is a salient feature of bourgeois society. It defines social status and belonging, while unemployment and not working bears the menace of being ostracized. From its earliest beginnings, photography has captured how, where and under what conditions people work – not only by in-house photographers, adhering to the perspective and specifications of the management but also by freelance photographers with an open-ended, unfiltered approach to places of production and trade. In both content and motif, the exhibition "Arbeit/Labour" traces the transition from physical labour to automation and computer-aided work environments in conjunction with migratory movement across continents and through decades. In an exchange between applied and art photography, increasingly invisible work is shown to act as a sediment under various social circumstances.

The brochure "Set 7" will be published in conjunction with the exhibition.