Occupying the central space as a part of our Artist-in-Residence series, Lara Schnitger present Two Masters and Her Vile Perfume, an entirely new installation drawing upon themes of sensual pleasure, seduction and exile inspired, in part, by Baudelaire's Les Fleurs du Mal. Your Hero Is a Ghost, is a new work by artist-duo Lovett/Codagnone in collaboration with architect Tom Zook. The lower level galleries is transformed by 4 emerging artists as part of SculptureCenter's ongoing In Practice series. This fall's installment features newly commissioned works by Justin Matherly, Lior Shvil, Josh Tonsfeldt and Viola Yesiltac. Elizabeth Neel exhibits new sculpture and paintings in the white cube gallery for an intimate exhibition titled Stick Season. 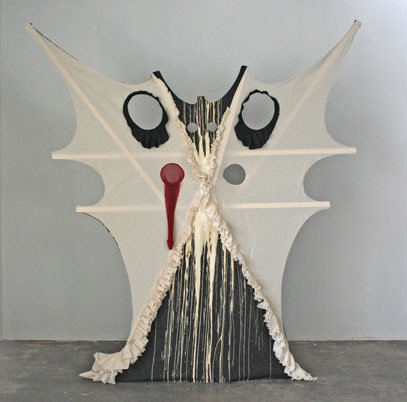 Two Masters and Her Vile Perfume is a highly theatrical sculptural installation featuring Schnitger's signature wood and fabric structures. Themes of metamorphosis, divinity, decay, and sadomasochism -- all of which have been present in Schnitger's past work -- will converge in an installation that will transform the SculptureCenter's central exhibition hall. The structure of the work is reminiscent of a medieval piazza or even a cathedral where adulation, commerce, and politics occupy the same space. The installation is populated by figurative forms that suggest demons, ghosts, businessmen, bikers and other more abstract forms.

The installation puts forward a type of gothic modernity and reflects the artist's recent reading of Charles Baudelaire and in particular his masterwork, Les Fleurs du Mal (1857). Les Fleurs du Mal (translated as Flowers of Evil) was Baudelaire's first and best known volume of poems. He was successfully prosecuted for offending public morals based on its themes of sex, death, lesbianism, and corruption. As an exile, an observer, and a Romantic materialist, Baudelaire is a kindred spirit to Schnitger whose work derives aesthetically from the cacophony and detritus of modern urban life.

Elizabeth Neel's work relies on a controlled chaos that conflates a palimpsest-like understanding of imagery with a masterful facility for gestural mark making and layered abstraction. A new body of paintings on paper and sculptures extends this tension into three dimensions as found objects, natural artifacts, and studio detritus join with painterly technique to form a series of precarious assemblages.

Incorporating organic and mechanistic references, Neel creates a hybrid iconography that tacks between mediums and moods. Resistant to facile representation, empirical observation and still life conventions mix with appropriated imagery, everyday objects, and abstraction in presenting a serial yet disjunctive ambience that is both playful and melancholy, archaic and spontaneous.

Your Hero is a Ghost by Lovett/Codagnone with Tom Zook

Your Hero is a Ghost comprises a large-scale sculpture and sound work and transforms the entire SculptureCenter courtyard into a theatrical space. The installation builds on prior work by Lovett/Codagnone that explores role-playing, the ways power is encoded in specific social behaviors and how language constructs and confines identity. The sound piece for the installation is by CANDIDATE, Lovett/Codagnone's band, and uses text and other sound to create a spatial soundscape. The work references cinematic and theatrical texts such as Peter Handke's "Offending the Audience" (1966), a landmark work in that it rejects illusion and makes the experience of the theater the subject of the work.

Lovett/Codagnone is an artist team based in New York City that has worked together since 1995. Their practice involves an ongoing exploration of relations of power, as manifested in explicit cultural signifiers as well as clandestine or unconscious behaviors and codes. Recent projects have expanded upon an interest in the political ramifications of conflating public and private spheres and probe issues of collective identity and the absorption of underground tactics of resistance. Lovett/Codagnone use photography, performance, video, sound, and installation, but their approach to time-based practices has always been intimately tied to spatial concerns. Recent exhibitions have included Common Errors (Sara Meltzer Gallery, 2009); Interruption of a Course of Action (MoMA/PS1, 2007); Erase, in collaboration with Tom Cole, (Participant Inc., 2007) and 100 Years (Version #2) (MoMA/PS1 2009) and 100 Years (Version #3) at Garage Center for Contemporary Culture, (Moscow, 2010). Recent performances have been presented at the ICA Philadelphia (2010); Art International Radio, Clocktower Gallery (2010); and the ICA Boston (2007).

Tom Zook is an architect who has been practicing in New York since 1999. He has designed and built numerous projects in the US, Mexico and India. Tom is in the faculty at the Yale School of Architecture where he has taught senior design studio for the past six years.

This is the first collaboration between artist team Lovett/Codagnone and architect Tom Zook.

Justin Matherly:
Matherly's sculptures consist of ambulatory equipment (walkers, crutches, shower chairs) that have been cut and reconfigured to hold up concrete forms that recall misfigured bodies, roughhewn monuments, and abject accretions alike. Influenced by the artist's ongoing research into the writings of the Marquis de Sade and psychoanalytic philosophy, Matherly's new series of sculptures and related prints take up the effaced Belvedere Torso of Ancient Greece as an additional inspiration.

Lior Shvil:
Occupying a space somewhere between storytelling and spectacle, the video and sculpture installations of Lior Shvil present such invented personas as Cherry Bomb and The Kosher Butcher by way of addressing the fragmented representation of politics and gender in contemporary society. Embracing the roles of director, actor, narrator, editor, and set designer, Shvil's experiments in theatrical production explore the comic territory of the jester as he flirts with cultural stereotypes and satirizes political ideologies. A new video and sculptural installation will enter further into the performative underworld of Shvil's Kosher Butcher character.

Josh Tonsfeldt:
Tonsfeldt makes videos, photographs, drawings, and sculptures that bring together materials from the urban environment with quietly observed moments in nature. Delicate and spare sculptures made from found materials often sourced nearby the exhibition venue interact with videos that depict unscripted scenarios of everyday gestures, animal behavior, and natural phenomena, while a varied approach to image-making may include photographs and digital scans alongside rubbings and other ephemeral surfaces in various states of decay and transformation. New video work will accompany a sculptural intervention in the lower level gallery space that transposes the artist's response to the city.

Viola Yesiltac:
Yesiltac works with photography, drawing, sculpture, and performance in installations that draw from an ongoing archive of site-specific photographic imagery. Taken from various locales-a defunct signage factory, domestic settings, details of interior design, and images of her immediate surroundings-Yesiltac reduces the information of a given context to a series of discrete views that serve as the basis for associative material responses. Sumi ink drawings, partitions, and wall and floor reliefs combine to re-imagine the quotidian as a surface for projection, poetic narrative, and superimposed design. A new slide series of sumi ink drawings on photographic imagery, Exterior, Interior, Signage Series, 2009-10, provides the basis for a site-specific installation.

For additional information or images, please contact Erin Pierson at 718 361 1750 x115 or press@sculpture-center.org.