An installation by Raqs Media Collective combining historical photographs (from the Galton Collection at University College, London, and the Alkazi Collection, New Delhi) and incorporating video, animation, and sound. Open-ended and anti-documentary, The Surface of Each Day is a Different Planet builds sequential scenarios that move across time and space, while considering collectivity, anonymity and the question of identity through history, fantasy and speculation. 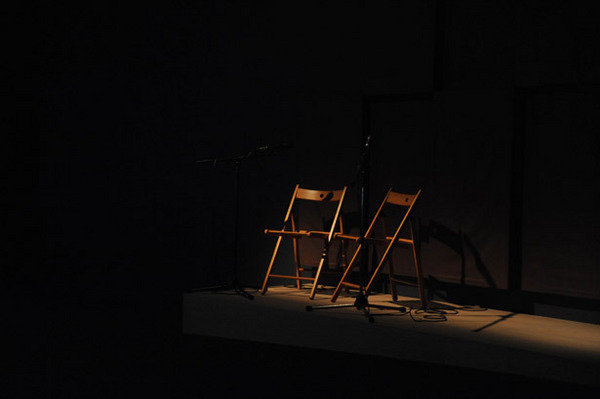 e-flux is pleased to present an installation by Raqs Media Collective combining historical photographs (from the Galton Collection at University College, London, and the Alkazi Collection, New Delhi) and incorporating video, animation, and sound. Stories leak, histories collide. Bones, bodies, faces, and handwriting blur. Crowds gather and move. Open-ended and anti-documentary, The Surface of Each Day is a Different Planet builds sequential scenarios that move across time and space, while considering collectivity, anonymity and the question of identity through history, fantasy and speculation.

Presented within a setting suggestive of a lecture hall, there is the anticipation of discourse: chairs and microphones are found on raised platforms yet speakers are absent. The presentation evokes the lecture- performance format commonly employed by the artists, but they, their bodies themselves, have somehow disappeared. Their voices are left behind, along with entire cabinets of curiosities.

"What happens when you layer one time on to another time? Do you get two times at once, or, do you register some other, singular temporal experience, analogous to the mysteriously singular 'composite' portrait of many individuals, which is neither a sum of the parts of the photographs of many faces, nor an average but a 'new' different face, which looks as if it belonged to a unique life. A life never lived, but made manifest as a photographic accident. Can there be a time made of juxtapositions, a time never experienced, but made serendipitously manifest by interpretative accidents? By the careful cultivation of chance encounters in scattered archives."

Raqs on The Surface of Each Day is a Different Planet

Raqs Media Collectiveʼs talks began manifesting themselves as a way of sharing notes from research and backstories of artworks with their publics in different parts of the world: in order to tell stories, and leave them half told, with space and time for listeners to fill them in as they fancied.

Since 1992, Raqs has traversed a varied terrain—from video to installation, to text image assemblages, to performance and encounters, to online media objects—Monica Narula, Jeebesh Bagchi, Shuddhabrata Sengupta see different forms and disciplines like chemists would see elements, or a biologist the natural world. By combining elements, observing mutations where they occur, and keeping a close watch on the way in which the world courses through their triangular consciousness, Raqs generates motives for its continuity and its pleasure. Located at the intersections of contemporary art, historical enquiry, philosophical speculation, research and theory, Raqs lives and works in New Delhi, based at Sarai – Centre for the Study of Developing Societies (http://www.sarai.net), an initiative they co-founded in 2000.

They have exhibited extensively in the context of large-scale international exhibitions such as Documenta 11, the Venice Biennial, and the Liverpool Biennial and in major art spaces such as Serpentine Gallery, Taipei Fine Arts Museum, and the Walker Arts Center. Raqs were co-curators of Manifesta 7 in 2008. Seepage, a collection of their essays and image-text works, has been recently published by Sternberg Press. Raqs is a word in Persian, Arabic and Urdu and means the state that "whirling dervishes" enter into when they whirl. It is also a word used for dance. At the same time, Raqs could be an acronym, standing for ʻrarely asked questionsʼ...!

The Surface of Each Day is a Different Planet was commissioned and exhibited at the Art Now: Lightbox in 2009 by Tate Britain.

In conjunction with this exhibition, a lecture-performance by Shuddhabrata Sengupta will be held at The Cooper Union.
Tuesday, September 14 6:30 pm with free admission

Notes for a Biology of Numbers: Birds, Beasts and Games with Forms
What does it mean to sustain a multiplied and divided practice in contemporary art? What does an abundance of methods and forms add to artists' understanding of the world they inhabit and of their own work? In this lecture, Sengupta will present the collectiveʼs ongoing reflections on its methods, processes and current curiosities.