A selection of slides from the lectures of Steven Izenour from the archive of Venturi, Scott Brown and Associates with works by Allan D'Arcangelo, Claes Oldenburg, Charlotte Posenenske, Ed Ruscha, Robert Smithson, Jeff Wall. The exhibition departs from and extends beyond a seminal project developed by the architects Robert Venturi, Denise Scott Brown and Steven Izenour, who, in their book 'Learning from Las Vegas' (1972), drew from existing critiques of urban space at the time to explore the role that signs played in providing order to the landscape. 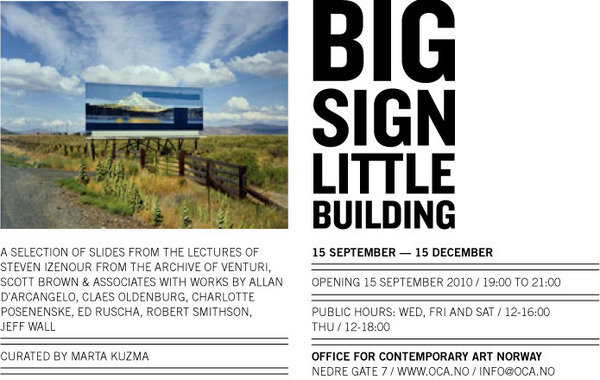 'Imagine a development: huge highway billboards with massive photo blowups of landscape not unlike the landscape unwinding all around the billboard itself – this massive artificial analogue for the highway only on the highway.'
(Jeff Wall, Landscape Manual, 1969–70)

'Learning from the existing landscape is a way of being revolutionary for an architect. Not the obvious way, which is to tear down Paris and to begin again, as Le Corbusier suggested in the 1920s, but another, more tolerant way; that is to question how we look at things.'
(Robert Venturi, Denise Scott Brown and Steven Izenour, Learning from Las Vegas, 1968)

'The things I make are variable, as simple as possible, reproducible. They are components of a space, since they are like building elements, they can always be rearranged into new combinations or positions, thus, they alter space.'
(Charlotte Posenenske, statement in Art International, 1968)

The discourse of natural beauty as linked to the sphere of art opens onto a field of ethics and social responsibility that harkens back to Kantian aesthetics. Yet, natural beauty as a concept primarily located within the phenomenon of landscape was significantly transformed by the process of societal modernisation that took place in the twentieth century. The experience of landscape consequently shifted from the Kantian category of the sublime to the space of leisure time – a space in which the experience of landscape became mediated by a human and technological mastery over nature.

'BIG SIGN – LITTLE BUILDING' is an exhibition that invites a discussion about the expanded temporal and spatial field for cultural production resulting from these shifts. The exhibition introduces a wider field of inquiry as pursued by the radical artists and architects who throughout the 1960s and into the 70s explored how the aesthetic experience of nature within modernity arrived at the perception of the expressiveness of nature through the expressiveness in things. In doing so, their respective investigations reflected upon the loss of faith in innate beauty and evolved into an aesthetic experience of landscape as one no longer located within the 'towering mountains eloquent in what they crush overwhelmingly', but instead as projections of space liberated beyond the proliferation of artificial things.

The exhibition departs from and extends beyond a seminal project developed by the architects Robert Venturi, Denise Scott Brown and Steven Izenour, who, in their book Learning from Las Vegas (1972), drew from existing critiques of urban space at the time to explore the role that signs played in providing order to the landscape. Originating as an architectural studio project conducted at Yale in 1968 (and eventually informally labeled 'The Great Proletarian Cultural Locomotive'), the mission of the project was 'to document and analyse the physical form of Las Vegas in order to learn from contemporary urban sprawl.' As an articulation of a space contesting the hegemony of Euclidean space, this approach also intrigued artists such as Charlotte Posenenske, Ed Ruscha, Robert Smithson, and Jeff Wall, who further challenged such traditional notions of space in order to explore new interpretations of landscape within the fields of aesthetics, art and architecture without succumbing to any one category. Other artists, such as Claes Oldenburg and Allan D'Arcangelo, cited as inspiration by the three architects, contested the sign system altogether, which increasingly reflected an attempt on the part of capital to claim nature, landscape, and public space as commodities.

'BIG SIGN – LITTLE BUILDING' exhibits, for the first time, the original glass lantern slides used by Steven Izenour for his academic lectures together with works by artists who transformed drafts, surveys, maps, and manuals into cultural artifacts, creating a new genre for cultural production at the time. Through the work of Allan D'Arcangelo, Claes Oldenburg, Charlotte Posenenske, Ed Ruscha, Robert Smithson, and Jeff Wall, among other archival materials and publications, the exhibition integrates projects that revised interpretations of landscape, building, and monument. The exhibition reflects upon how these artists and architects attempted to dislocate traditional interpretations of these concepts in an effort to generate a critical dialogue around the effects of power inscribed in public information generated by the city and by the hierarchies, standardisations, and space-time relationships effected by corporate development.

'BIG SIGN – LITTLE BUILDING', curated by OCA's Director Marta Kuzma, is dedicated to the memory of Steven Izenour and made possible by the generous efforts of John Izenour and loans of work from Venturi, Scott Brown & Associates, John Izenour, Claes Oldenburg, Jeff Wall, Estate of Allan D'Arcangelo, Estate of Charlotte Posenenske, Nicole Verstraeten-Daled, Frank Mosvold and Sørlandets Kunstmuseum, Nasjonalmuseet for Kunst, Arkitektur og Design, and Barney & Astrid Rosset. The exhibition will be accompanied by a publication printed by the time of the exhibition closing in Oslo.