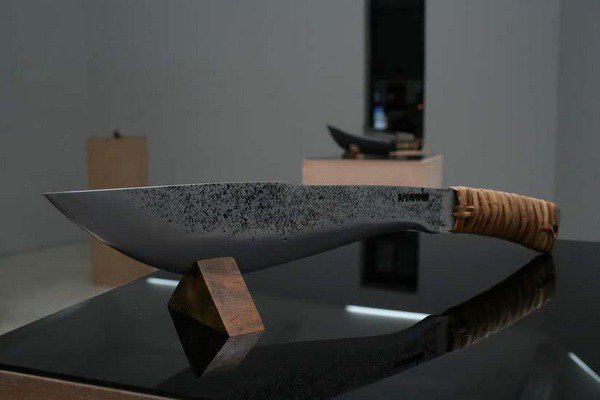 Para/Site Art Space is honored to present SHARP/CLEAR/DEEP curated by Thai artist Rirkrit Tiravanija. The exhibition showcases a group of contemporary artists from Thailand, and is part of an exchange programme between Gallery VER in Bangkok and Para/Site Art Space in Hong Kong. In the current crisis of identity, Thai society is going through the double-edged confrontation between the established institution of bureaucratic urbanism and the grassroots ruralism of peripheral under class. Democracy becomes the victim of political tug of war, whereby every side of the conflict hides behind a pretense of the search for freedom of expression and self-relevance within the society. Sharp as a knife’s edge is the communal sense in which a shared interest becomes a focal point where obsession of a tool brings people for exchange and trade.

Clear is the voice of the people’s demand that they be heard and acknowledge, that change is knocking its boots against the wall. Deep are the grooves of history etched into the memory of the minds of the people, where the future is dawn and the past cannot be erased. About the Curator Rirkrit Tiravanija (b. 1961) is among the world’s most influential contemporary artists. His solo exhibitions include Rirkrit Tiravanija: A Retrospective (Kunsthalle Bielefeld, Bielefeld, Germany, 2010); Less Oil More Courage (Kunsthalle Fridericianum, Kassel, Germany, 2009); A Retrospective (tomorrow is another fine day) (Serpentine Gallery, London; Musée d Art Moderne de la Ville de Paris, Paris; Museum Boijmans Van Beuningen, Rotterdam, 2004-5); Hugo Boss Prize (Solomon R. Guggenheim Museum, New York, 2004); and the 48th Venice Biennale (Venice, 1999).

About the Artists
Charit Supaset (b.1976), Disorn Duangdao (b.1973), Worathep Akkabootara (b.1976) are members of an artist collective, As Yet Unnamed. The collective has been included in Imagine Peace (Bangkok Art and Culture Center, Bangkok, 2010); The Revolution Will Not Be Televised (Taipei Artist Village International Residency Program, 2010); As Yet Unnamed First Station (About Studio/About Café, 2008). Each artist’s work diverse widely, while Supaset works with knife- making and drawing, Duangdao prefers conceptual installation, and Akkabootara oftens fills his conceptual works with texts and symbolism.

Montien Boonma (1953-2000) was one of the most pioneering Thai artists who used local materials to create art works that explored Thai identity. His works include sound and odor to stimulate all human senses. He was the first Thai artist selected by the Biennale of Sydney in 1990. Several of his works are displayed in leading museums and galleries, including the Art Gallery of New South Wales in Australia and Fukuoka Asian Art Museum in Japan.

About Gallery VER
Gallery VER began with the establishment of Namdee publishing station in Bangkok in 2000 by Rirkrit Tiravanija. In 2004, the project was renamed PLAN.b publishing, production and design limited partnership. Established in 2006, the gallery initially aims to act as a platform for launching innovative ideas in such forms as artist's books, textbooks, magazines, music, film, video, posters, graphics and design.

Gallery VER is interested in ideas and objects, which can be published and/or multiplied and disseminated into the cultural stream. In the curatorial form of exhibitions, projects, one-off activities and events, institutional exchanges, the gallery seeks to initiate new strands of programming under the best possible circumstances and processes.

The gallery also provides chances for artists, designers and other creatives abroad to realize and produce work in Thailand. In this capacity, Gallery VER have been working with such artists as Tobias Rehberger, Olafur Aliasson, Philippe Parreno, Superflex and many others.

About Para/ Site
Para/Site Art Space is a contemporary art space located in Hong Kong Island and founded in 1996. We host an ambitious programme of exhibitions, screenings, talks and events that bring into Hong Kong some of the leading practitioners in the international arena, encourage the visibility of artists from Hong Kong, and facilitate East-West dialogue. We have a satellite venue located at Hanart TZ Gallery which showcases a younger generation of artists. Para/Site Art Space has organized the official representation of Hong Kong in Venice Biennial in years 2003 and 2009, has also participated in Gwangju Biennial, Guangzhou Triennial, among others. Para/Site Art Space exhibitions and programmes have traveled to Germany, Thailand, Korea, Taiwan, United Kingdom, Singapore and Australia.

Para/Site Art Space is run by a Executive Director/Curator, a Manager, a Programme Coordinator and an Education and Development Officer and governed by a board of directors. Para/Site is supported by the Hong Kong Arts Development Council as well as vital contributions from patrons and Founding Friends of Para/Site.