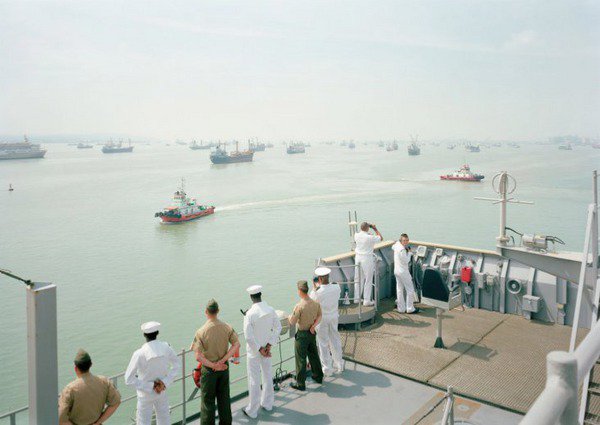 Murray Guy is very pleased to announce our third solo exhibition with An-My Lê, featuring a series of exceptional new photographs from the artist's recent travels with the American armed forces. Please join us for the opening on Thursday, September 16 from 6 to 8pm, and on Saturday, October 16 at 4:30pm for a conversation between the artist and writer Lynne Tillman.

Amongst the always polarizing and mythologizing representations of military force, Lê's new photographs represent an unlikely variety of experience: unsung humanitarian missions to Ghana and Senegal, jungle warfare training with Indonesian Marines in Java, a naval hospital ship's recent mission off the coast of Vietnam, relief efforts in Haiti, one aircraft carrier's deployment in support of American forces in Afghanistan, and another aircraft carrier's eventless days at sea and dramatic passage through the Suez Canal.

Lê takes up the military's movement over the world's vast, ungovernable oceans as a site to visualize forces that today often seem beyond representation: changing global circulations of people, resources, power, and capital. The scale of her photographs ranges from expansive to intimate, as they describe competing influences and spaces, showing massive war machines dwarfed by vast occupied landscapes, and soldiers whose glaring individuality evokes an intersection of strength and vulnerability specific to militarized zones. Yet their politics is “small,” built out of many specific encounters: for instance between an American sailor waiting with a Vietnamese Buddhist nun in the processing area of a naval hospital ship, or a Ghanaian airman performing life saving combat techniques on an American corporal.

Lê's ongoing practice betrays a deep debt to the history of landscape and portrait photography—in particular nineteenth century photographers such as Roger Fenton, Timothy O'Sullivan or Gustave Le Gray, who were concerned as much with the richness of the photograph as a visual or topographic document as they were with any supposedly independent aesthetic value. She opens up different possibilities for these historical practices today, as they circulate amidst images proliferating from Hollywood films to photojournalism to candid snapshots and “official” military portraits.

An-My Lê (b. 1960, Saigon) is among the most important photographers working today. Her work is currently on view in The Original Copy: Photography of Sculpture, 1837 to Today, at The Museum of Modern Art, New York. Other exhibitions from the past year include Haunted at the Solomon R. Guggenheim Museum, New York; In the Vernacular at the Art Institute of Chicago; and Into the Sunset: Photography's Vision of the American West, also at the Museum of Modern Art. She has had solo exhibitions at DIA: Beacon (2007-2008); the Henry Art Gallery, Seattle (2007); the San Francisco Museum of Modern Art (2006); The Museum of Contemporary Photography, Chicago (2006); and P.S. 1 Contemporary Art Center, New York (2002), among many others. She was recently awarded a 2010 Louis Comfort Tiffany Foundation Award, and in 2007, was the subject of a feature on the acclaimed PBS television series Art 21. She is an associate professor of photography at Bard College.