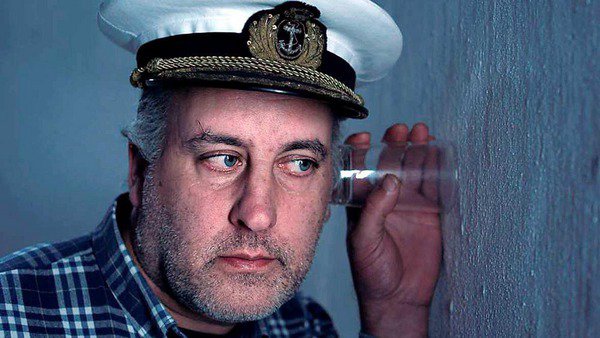 The exhibition ‘LARGER THAN LIFE’, produced by MARCO, Vigo and Fundação Calouste Gulbenkian – CAM, Lisbon and curated by Isabel Carlos, focuses on the work the artists Vasco Araújo (Lisbon, Portugal, 1975) and Javier Téllez (Valencia, Venezuela, 1969). This type of anthological dual exhibition has not been much explored, and where Araújo and Téllez are concerned, it is particularly important to highlight the fruitful dialogue between them. Various factors exist which are common to both of their bodies of work. The exhibition shows anthological works by both artists, along with others specifically created for this exhibition.

MARCO, the Museum of Contemporary Art of Vigo, starts its new exhibition schedule with a show produced jointly by MARCO and Fundação Calouste Gulbenkian – CAM, Lisbon. The exhibition LARGER THAN LIFE brings together the work of the artists Vasco Araújo and Javier Téllez. Vasco Araújo was born in 1975 in Lisbon, the city where he lives, and Javier Téllez was born in 1969 in Valencia, Venezuela, and currently lives between Berlin and New York. These two artists, who belong to the same generation, already possess a substantial body of work and have growing international reputations.

In this respect, we cite by way of example the solo exhibition that Araújo recently staged at Jeu de Paume in Paris and the acquisition of two of his video works by the Centre Georges Pompidou; in Téllez’s case, we can cite his remarkably successful participation in the last Whitney Biennial in New York, or the recent acquisition of the 2004 work La passion de Jeanne D'Arc (Rozelle Hospital) by the Tate Modern in London. Both artists belong to the same generational span. But this biographical retail i not the prime reason for presenting their works together. Rather, it is the fact that these two artists display a set of common characteristics. The first aspect to be noted is the fact that their work is frequently based on references to the history of cinema. In the case of the Venezuelan artist, this particular feature is clearly assumed and takes the form of citation. Sometimes he even makes use of the film itself, as happens in La Passion de Jeanne D’Arc (Rozelle Hospital), in which the artist uses Carl Theodor Dreyer’s film, The Passion of Joan of Arc, but with new dialogues between the scenes, written by women patients at the Rozelle Hospital in Sydney. In the case of the Portuguese artist, cinema does not appear in his work in such an explicit and material way, but in his videos we see echoes of various filmographies, ranging from Bergman to Fassbinder, but also including Almodóvar, Antonioni or Oliveira.

Yet it is not just the cinematic heritage that is worked upon by Téllez and Araújo, it is also the great classical narratives, namely those drawn from Greek tragedy, opera in the case of the Portuguese artist, or outstanding and paradigmatic historical events. The psychological and psychiatric dimension is a feature that runs through the works of these two artists: in the case of Téllez, through his work with patients; in the case of Araújo, because he frequently touches upon themes related to psychological and family dysfunction and social traumas.
But, above all, what unites the works of the two artists is the fact that they make visible the strange, the uncomfortable, what we often do not want to see or confront. It is from life that the artists show us zones of invisibility and prejudice. “Death, life, drama, opera and fado run through the exhibition from one end to the other: there is an excess, there is something ‘larger than life’ in all of these works.”

The exhibition intends to show anthological works by both artists, along with others specifically created for this exhibition. This last one feature, in Araújo’s case, the video Mulheres d’Apolo and the performance O Morto; as well as the video installation Rinoceronte de Dürer, by Javier Téllez, which was filmed in the panoptic space of the Miguel Bombarda mental Hospital, in Lisbon. The architectural structure of the panopticon has been widely used in hospitals and prisons, as is the case with the MARCO Museum, a building which was a former panoptical prison.

ABOUT THE CURATOR
Isabel Carlos (Coimbra, Portugal, 1962) is the director of the Modern Art Centre (CAM) of the Fundação Calouste Gulbenkian, Lisbon. She has curated the following exhibitions, among others: Sublime (Museu do Chiado, Lisbon 1994); The Day After Tomorrow (Centro Cultural de Belém, Lisbon 1994); Mediations (Palácio Galveias and Museu do Chiado, Lisbon, 1997); Eve's - Paula Soares Triennial of India, (New Delhi 1997); Entrada Azul - Helena Almeida retrospective (Casa de América, Madrid 1998); Trading Images - one year international exhibition cycle (Museu da Cidade, Lisbon 1998); Initiare (Centro Cultural de Belém, Lisbon, 2000); Helena Almeida: Inhabited Drawings (The Drawing Center, New York 2004); Por entre as linhas (Museu das Comunicações, Lisbon, 2007), and Taking Time (5th Anniversary of the MARCO, Vigo 2007), with Iñaki Martínez Antelo. Isabel Carlos was curator of the Sydney Biennial of 2004, and more recently the Sharjah Biennale of 2009. She founded and directed the Instituto de Arte Contemporânea (IAC) from 1996 to 2001, dependent on the Portuguese Ministry of Culture, whose international collection she set up and managed for three years. Whilst at the IAC, she organised a number of activities related to her post, amongst which were the Portuguese representations at the Venice Biennale of 2001, the London Art Biennial 2000, and the São Paulo Biennial of 1996 and 1998.

CATALOGUE
On the occasion of this exhibition, MARCO of Vigo and Fundação Calouste Gulbenkian of Lisbon have published a trilingual catalogue (Portuguese-Spanish-English) which includes two esssays by Jacinto Lageira on the work of Vasco Araújo —Return to muteness— and Javier Téllez —These others who bind us together—; a text by Gabriela Rangel on the affective dimension of the image in relation to the works La Passion de Jeanne d’Arc (Rozelle Hospital) and Mulheres d’Apolo; an unpublished interview with Javier Téllez and Mark Beasley; and the text by José María Vieira Mendes for the work El muerto by Vasco Araújo; together with a text by the curator, Isabel Carlos, and images and information of the works exhibited.