Silent Warriors is organised around two of Abdessemed's major works: Habibi, 2003, a 17-metre human skeleton made of fibreglass and a new installation entitled Silent Warrior, which includes numerous colourful masks. Exposure 10 includes the winners of Exposure award: Kate Liston, Lea Provenzano, and Leah Capaldi. The works of this year's award winners reflect the breadth of collaboration amongst the Royal College of Art's various departments. 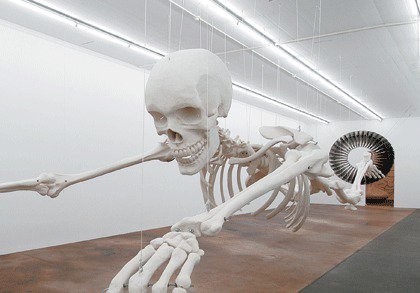 Parasol unit foundation for contemporary art is delighted to announce the winners of EXPOSURE 10, the second year of its annual EXPOSURE award, which coincides each year with the Frieze Art Fair. This award aims to provide an opportunity for graduates from a UK art school to exhibit works at Parasol unit in a professional context. Their work is shown alongside the major exhibition at the foundation and at a time when they can benefit from exposure to a wider and international audience. In 2010 Parasol unit has collaborated with the Royal College of Art on this project.

The winners of EXPOSURE 10 are: Kate Liston, Lea Provenzano, and Leah Capaldi. The works of this year’s award winners reflect the breadth of collaboration amongst the Royal College of Art’s various departments. The three artists will be given the opportunity to showcase their work from the 22 September until 17 October at Parasol unit foundation for contemporary art and the preview will be held on 21 September from 6.30 to 9 pm; coinciding with this year’s main exhibition, Silent Warriors by Adel Abdessemed. The work of Lea Provenzano will be shown in the Project Room on the first floor, whilst Leah Capaldi’s video installation within a cargo container, Sculpture, will be displayed outdoors and Kate Liston will create an intervention within the building.

Parasol unit foundation for contemporary art is delighted to present the first solo exhibition dedicated to the work of Adel Abdessemed in London. Working across a wide range of different media, including sculpture, installation, video, photography and drawings, Abdessemed passionately tackles difficult subject matter and taboos within society and presents them as naked truth. Yet beyond their often challenging and provocative appearance, his works embody the fragility of life and are deeply imbued with beauty and poetry. Abdessemed’s exhibition at Parasol unit highlights precisely the vulnerability and aesthetic sensitivity in the work of this important twenty-first century artist.

Silent Warriors is organised around two of Abdessemed’s major works. In the ground floor gallery, Habibi, 2003, a 17-metre human skeleton made of fibreglass hangs horizontally from its spine together with an aeroplane propeller. Occupying the first floor is a new installation entitled silent warrior, which comprises over 800 colourful masks made from found and discarded empty tin cans, once used in Africa to contain food provisions or industrial and poisonous materials.

According to the artist, Habibi, which is the Arabic word for the masculine form of address for my beloved, is a self portrait. As he notes: I have often said that Habibi was a self portrait because I like to think when I am lying on the floor, unlike Giacometti’s Man Walking or Rodin’s Thinker or a Buddha. I do my thinking laid flat out on my stomach in a position that resembles taking off or hovering.1 A metaphor for passage, the propeller offers a threshold between life and death and provides the vital propulsion for the piece. Silent Warriors also includes other works, such as ALSO SPRACH ALLAH, 2008; Enter the circle, 2009; the sculptural piece Music box, 2009, which plays a brief excerpt from Wagner’s opera Die Walküre (The Valkyrie); and Moscow (five sisters), 2010, another new installation. Moscow (five sisters) is made of clear hand-blown glass and consists of five pairs of skates modelled on ice skates used by Russian figure skaters. All these works reflect Abdessemed’s ongoing exploration of ideas surrounding violence, truth and beauty.

An exhibition catalogue with insightful essays by Ziba Ardalan, Gilane Tawadros and Guy Tortosa will be published and distributed worldwide.