(1858-1925) Prints. Corinth produced nearly one thousand paintings, made watercolors and drawings, and also left a large body of prints, itself comprising almost one thousand works. The literary figure painting depicting tales from Greek and Roman mythology and Biblical history, especially the Passion of Christ, occupies a prominent place in his oeuvre, along with other genres such as the portrait, the quotidian scene, and the still-life. Curated by Christian Muller. 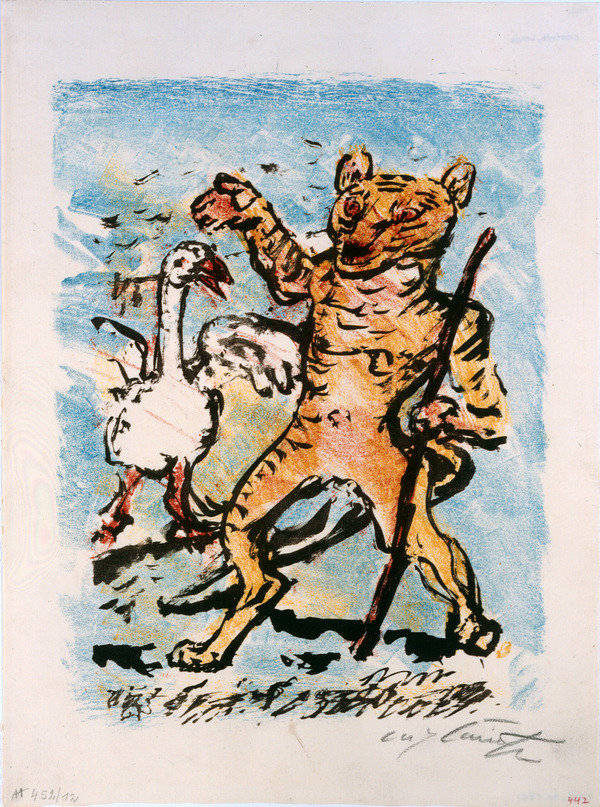 In 2009, through a bequest from Mrs. Hildegard Kirchbach-Schmidt (7 February 1907–9 July 1995), the Kupferstichkabinett of the Kunstmuseum Basel obtained a group of over 200 prints by Lovis Corinth, a selection of which is now presented in an exhibition of the Kupferstichkabinett. The prints were formerly part of the collection of Dresden industrialist Kurt Kirchbach (1891–1967). In the ’20s of the previous century, he began to assemble paintings, sculptures, and works on paper by contemporary artists, particularly Expressionists, as well as important avant-garde photographs.

Franz Heinrich Louis Corinth, who later called himself Lovis Corinth, was born on 21 July 1858 in Tapiau, East Prussia. He was educated as a painter at the academies in Königsberg, Munich, and Paris. In 1887 he returned to Königsberg, in 1891 went again to Munich, and subsequently took up residence in Berlin. While on a trip to Amsterdam, he died on 17 July 1925 in Zandvoort.

Corinth produced nearly one thousand paintings, made watercolors and drawings, and also left a large body of prints, itself comprising almost one thousand works. He could be described as a highly successful artist who reflected upon his career and his art in various writings, and authored a textbook on painting. Even in the era of economic decline after the First World War, he was able to establish himself on the art market. His works soon made their way into public collections, such as those of the Kunsthalle Bremen, the Hamburger Kunsthalle and the National-Galerie in Berlin. Through his participation in the exhibitions of the Berlin secession together with important exponents of the avant-garde, and through his inclusion in exhibition projects in London, Paris, and Venice, as well as in the International Exposition in Ghent, he achieved international recognition.

The literary figure painting depicting tales from Greek and Roman mythology and Biblical history, especially the Passion of Christ, occupies a prominent place in his oeuvre, along with other genres such as the portrait, the quotidian scene, and the still-life. He is frequently mentioned together with Max Liebermann and Max Slevogt, and like them is identified as a representative of German Impressionism. However, he is also seen as a precursor of Expressionism, which can be attributed as much to his impulsive and passionately executed painting and drawing as to the exaggeration of forms, through which he gave expression to psychological and emotional states.

Corinth’s people in scenes from ancient mythology or the Bible frequently appear as if they came from the artist’s immediate surroundings, or if, like actors, they had just now taken on the roles of these distinguished protagonists. Often they appear abruptly, as if ex nihilo, are cut off by or break out of the edges of the picture. In addition, the behavior and destinies of the “heroes” are presented with irony and pictorial humor. Not conforming to any ideal of beauty, Corinth’s nudes are provocative, as are his erotic themes. Corinth, like his academic teachers, took the works of the Old Masters as models. In addition to their painting method, he was particularly interested in their compositions, and the iconographic traditions supported by centuries of human experience.

This provided a basis for the narrative formulation of his mythological scenes, and his individual interpretation of them; the same also applied for the genre of portraiture. The ground was laid with the French and German revolutions and ideas of a realistic or naturalistic art, which called into question and relativized the traditional history painting, in the academy long considered the foremost of pictorial genres.

The techniques of etching, dry-point, and soft-ground etching (vernis mou), as well as of black-and-white and color lithography, occupied the center of Corinth’s attention. But in fact, he preferred the technique of etching, which is most closely related to drawing. Corinth made individual prints as well as circulating his works in the form of portfolios and suites. Numerous prints illustrate literary sources, while others are associated with his paintings. Often his prints have a sketchy appearance, or they let a spontaneous idea, a study from nature, or something unfinished occupy the foreground. The exhibition is accompanied by an illustrated brochure with a text in German.
Christian Müller