Art in the Wake of Television Camp. The project aims neither at a thematic nor a moralistic analysis of television, but rather at an aesthetic, 'camp' approach, in keeping with Susan Sontag's analysis in her Notes on Camp. The exhibition includes artists who are not necessarily using their own transmission slot on television. Instead, like parasites, there are those that infiltrate existing TV with their own artistic concerns. At the same time, Kolnischer Kunstverein shows a homonymous exhibition with other artists and curators. 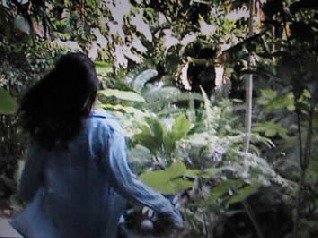 The significant discussions during the seventies and eighties around television are forgotten – since then, television has asserted itself as a medium which is appealing to the masses and is hardly called into question by media- and technology critical artistic projects. H ow do artists who rather receive television casually and from a consumer-oriented point of view, and are interested in its (pop)cultural image production and it as space of politics, experience this powerful “old lady” nowadays?

Forbidden Love: Art in the Wake of Television Camp analyses television as a reactive and open process, as a space of the struggling for attention, of self-expression and affect, which popularises the discourse around identity, gender and difference. Thereof evolving “images” of television determine, as powerful construction, the thematic framing of the exhibition, which flirts with the participation of a mediatized production process, trying to draw us out of our habitual role as a passive audience.

The works on display start out with television as an apparatus of image production, sounding capabilities of a symbolical transfer of common genre-immanent codes and meanings to the point of a separate metaphorical interpretation. The projects analyze the established and mostly already a bit outdated image productions of television and also discuss forms of a “camp” aesthetics around a possible “different” television.

The exhibition title “Forbidden Love” refers to a pre-prime-time serial, which is running since 2004 on weekdays, triggering individual imitations in Turkey and Bulgaria and, on the other hand, to the Canadian docufiction Forbidden Love: The Unashamed Stories of Lesbian Lives (1992). In the foreground of both broadcasts are melodramatic relations and intrigues of changing hetero- and homosexual couples, whose rather naive progressive potentials are part of the consumer-friendly early evening program.

At the same time, Kölnischer Kunstverein shows a homonymous exhibition, curated by Anja Nathan-Dorn and Kathrin Jentjens: “The exhibition studies television’s modes of temptation with its ‘glaring mannerisms’ and television as world of experience with various formats and communication forms and the therein comprised ambiguities. The project does not aim at a contentual or moral analyses of television but is interested in an aesthetical, in a 'camp’ approach to this field as Susan Sontag worte.

The exhibition in Graz concentrates, in this context, on the artistic access to related television formats like soap operas and docufiction and its tendency towards staging, idealization and shift in meaning, and the variable interest and indifference towards a television that is revolving always anew on its fringes, however, only as sufficiently interesting mass media.

In their Cadavre Exquise Vivants, BitteBitteJaJa (Ulu Braun / Roland Rauschmeier) arrange abnormal body-collages, which are composed of limbs and elements that are extracted from various television- and film productions. Their “excellent coffin dodgers” remind of visions of horror- and science fiction-B-movies, whose slavering, burlesque protagonists often are of astonishingly indifferent gender and origin regarding their preferably expressive, sexual gestures. The present work Daphne (201 0) refers to the mythical nymph “Daphne”. Reacting on Eros’ allegedly lacking accuracy, Apollo was hit by an arrow making him fall in love with Daphne. She turns into a tree to elude Apollo’s courtship, who refused to let up on her.

In a currently revised version of their installation Apokalypso Place (2000/10), Christoph Draeger and Reynold Reynolds furnish a living room of a SitCom-production, which has been damaged by a natural disaster. By means of a television-addicted, hyped-up family who feasts on the catastrophes which are broadcasted on television and now is becoming itself the victim and thus relevant for newscasts, Draeger and Reynolds analyse the attention craving mechanisms of our medial culture and its readily expressive characters.

In the installation Majka from the Movie (Szaleñstwo Majki Skowron / Madness of Majka Skowron) (2009/1 0), Zuzanna Janin shows seven episodes of the homonymous Polish television series from the 1 970s, which she completes and superimposes with self-shot current material. In the original version, Janin was the eponymous child actress, now her daughter plays the principal character. The successful serial deals of M ajka’s youth, desires and dreams, which remained restricted, due to the former political regime, seeming boundless and strangely exchangeable in the new global version.

A common catalogue and a symposium in cooperation with Cologne Conference accompany the whole project.