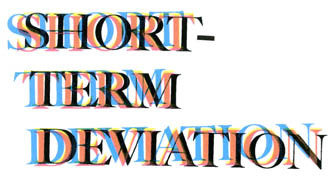 In conjunction with Short-Term Deviation, Showpaper will run a four-part print series featuring new work from Grant Willing, Katja Mater, Arthur Ou, and Borden Capalino. With musical notation in mind as metaphorical framework, the artists were asked to respond to photos of the empty EFA Project Space— allowing these to serve as the initial ‘notation.’ Each issue is printed monochromatically in one of the four standard offset printing colors (Cyan, Magenta, Yellow, Black), in homage to the composition of the printed object.

Dividing EFA Project Space into two distinct rooms, the varied installations in the performance venue and the library/screening rooms explore concepts of the material and immaterial through tone and ambiance, and to pose interventions. Events scheduled every Thursday consist of video screenings and musical and artistic performances that play with the concepts of structure and noise. In the performance space, Nadja Marcin creates a mobile installation to provide the framework for other performances in addition to her own, which she willperform weekly using ventriloquism to explore the “Four Poles of Assumed Truths.”

Travess Smalley and Max Pitegoff present new work based on their collaborative work as Poster Company. Borna Sammak creates an installation for a video landscape pieced together from captured footage. Catharine Ahearn fabricates a light-piece consisting of treated and layered found coupons.

The zine library/screening room will feature, "Fans", a dual-fan installation by Charles Harlan; “Hot Tubs”, an interactive silk-screened floor-piece by Grayson Cox; and projected video installations by George Pfau and David Berezin. The screening program will feature works culled from the genres of sci-fi, horror, and street intervention, rendering psychological spaces of stylistic and behavioral deviation.

For updates on the performance schedule visit http://www.efanyc.org, or http://www.showpaper.org.

Showpaper is a nonprofit, volunteer run, newsprint-only publication that promotes upcoming all-ages music shows in New York, New Jersey, and Connecticut, including such non-mainstream venues as parks, garages, lofts, and other alternative spaces. In addition, each issue features artworks from underground and established artists on the cover, doubling as a full color fold out poster as well as an informational object. Artists from the local community, to the international scene have been featured on the covers of Showpaper’s in its three years of existence. The variety and eclecticism of covers and creators makes each Showpaper issue a piece of instantly collectible ephemera. A rarity in our overly commercialized world, Showpaper exists free of corporate sponsorship, and is run, distributed, and funded by the same grassroots community it serves, with volunteers filling the research and distribution needs to list and support small venues, local cultural organizations, and many other aspects of the independent art and music scene.

EFA Project Space, a program of the Elizabeth Foundation for the Arts, was launched in
September 2008 with a focus on the investigation of the creative process, aiming to provide dynamic exchanges between artists, cultural workers, and the public. The Project Space presents exhibitions and programs in collaboration with a diverse range of organizations, curators and artists to provide a comprehensive and critical perspective on creative practices. A major aspect of the program’s development is ongoing outreach to the myriad individuals and institutions effectively shaping culture today.

Art is directly connected to its producers, to the communities they are a part of, and to every day life. By contextualizing and revealing these connections, we strive to bridge gaps in our cultural community, forging new partnerships and the expansion of ideas. Through these synergies, artists build on their creative power to further impact society.

EFA Project Space is located on the 2nd Floor of 323 West 39th Street, between 8th and 9th avenues
Gallery hours are 12 - 6, Wednesday - Saturday