The Earth is Flat After All

The show features works by Bas Jan Ader, Francis Alys, John Baldessari, David Hammons, and Robin Rhode. The works included reflect the artist's local domain yet each has universal reach. They are personal but only up to a point; the viewer is allowed merely a glimpse into the artist's psyche. Instead, the focus is on locating the remarkable in the everyday, or in creating the extraordinary from the mundane. 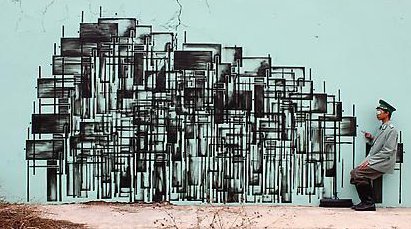 Perry Rubenstein Gallery presents The Earth is Flat After All, featuring works by Bas Jan Ader, Francis Alÿs, John Baldessari, David Hammons, and Robin Rhode. The works included reflect the artist’s local domain yet each has universal reach. They are personal but only up to a point; the viewer is allowed merely a glimpse into the artist’s psyche. Instead, the focus is on locating the remarkable in the everyday, or in creating the extraordinary from the mundane.

In Hammons' video Phat Free (1995/ 1999) the artist kicks a can along the streets of New York against a blurred background to the echoing sound of metal hitting concrete. Hammons pensively wanders through Harlem, the neighborhood where he has long resided. The simple, repetitive action projected life-size forces the viewer to join in on the journey and follow the artist through a moment in his life. The playful nature of the act of kicking a can recalls childhood games and suggests the phrase “to kick the bucket,” or in other words, to die. In Hammons’ grasp, such a dark concept is stripped of negativity and instead provokes the reaction that he is letting the viewer in on a private joke.

Francis Alÿs’ Collector (prototype, failed preliminary sketch) (1990), is a sculpture of a dog made from magnetized steel covered in small metal objects, including a bottle cap, screws and miscellaneous metal detritus. The piece is the first iteration of The Collector, a sculpture that the artist built for a performance in Mexico City. The dog was mounted on wheels and walked through the urban environs, all the while collecting scraps of metal that were attracted to its magnetized steel body. This absurd yet clever act resulted in a relic representative of Alÿs’ moment in his home city.

In Fall II, Amsterdam (1970), a black and white video by Bas Jan Ader, the artist rides a bike along the Reguliersgracht in Amsterdam while carrying a bouquet of flowers. Without hesitation, he drives off the riverbank and plunges with a calamitous splash into the river. Thoroughly slapstick, the absurd action becomes poetic in the hands of Ader.

Prima Facie (Fifth State): Elephant Pink/ Pink Popsicle/ Sweet 16 Pink/ Pink Harmony/ Touch of Pink/ Paradise Pink/ I love you Pink/ Pink Bliss (2006) by John Baldessari is a pigment print overlaid in latex paint comprised of eight pinks from the Pantone color chart. With this work the artist’s wit is apparent: he creates objects out of thin air by assigning colors to imaginable essences that the viewer then forms mentally. Baldessari is simultaneously referencing his on identity as an artist by employing colors that are classified by Pantone, a tool specific to those involved in artistic production.

With the animation Requiem of a Pavilion of Silence (2010), Robin Rhode presents a very personal work. Location is of utmost importance; the piece was photographed in Johannesburg, South Africa, the artist’s birth country, while the visual references indicate a distinct German presence. Rhode resides in what was formerly East Berlin and the stenciled form that proliferates across the sea foam-colored wall is that of the Gerrit Rietveld designed Berlin chair. Rhode’s doppelganger sports an old East German officer’s uniform as he draws multiple Berlin chairs to form a large, imaginary “pavilion.” The pavilion of silence, as the title indicates, pays homage to a non-extant African pavilion at the Venice Biennale. It’s a subtle self-portrait of sorts, intentionally lacking in sound, with South Africa peeking through a German veneer.

Together these works evoke the questioning of accepted truths—whether the laws of physics, traditions of narration, or perception of the self—without taking life too seriously.